Few, if any, constitutional scholars think Justice Harry Blackmun’s majority opinion in Roe v. Wade (1973) was flawless. When Jack Balkin invited eleven leading scholars to rewrite the decision for his 2007 book What Roe v. Wade Should Have Said, each of the contributors departed in some way from the Court’s original approach. The one thing scholars across the ideological spectrum can agree on is that the Court should have said something else.

What the Court did say in Roe is that the anti-abortion laws on the books in Texas violated the Due Process Clause of the Fourteenth Amendment. In dicta, the Court then offered a précis of abortion history and outlined a trimester-based regulatory framework for state legislatures in a stated attempt to balance “the respective interests involved” in abortion in light of “the profound problems of the present day.” When read together with its companion case Doe v. Bolton (1973)—which stipulated a broad “health” exception to any legislative proscription of even late-term abortion—Roe created a legal regime that Time magazine soon dubbed “abortion on demand.” Forty-one years later, the United States is one of four countries—along with Canada, North Korea, and China—that allow abortion for virtually any reason at any time during pregnancy. 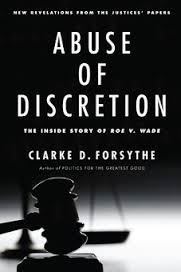 Many people have criticized the decision. Clarke Forsythe, Senior Counsel at Americans United for Life, takes on a more difficult task in Abuse of Discretion: The Inside Story of Roe v. Wade. Instead of asking what Roe should have said, Forsythe asks why Roe said what it did. Forsythe’s nuanced answer comes in a 350-page inquiry into American history, law, and politics. In addition to covering familiar ground, Abuse of Discretion reveals little-known details from the published papers of Supreme Court justices, and the book includes an additional 100 pages of endnotes. Although Forsythe takes a measured tone throughout, he is a professional pro-life advocate, and his book critically recounts the Court’s many missteps, errors, and fabrications.

The first mistake, according to Forsythe, was the Supreme Court’s decision to even hear the Roe and Doe cases. Under the assumption that they involved only technical questions about federal intervention in state court proceedings, the Court initially agreed to review them. As Bob Woodward and Scott Armstrong explained in their 1979 book The Brethren, the “two abortion cases were not to be argued primarily about abortion rights, but about jurisdiction.” Since the cases were jurisdictional, the justices were unconcerned with the lack of a factual record in both Roe and Doe. Yet after deciding that the Court did have jurisdiction to hear the cases, the Court proceeded to consider whether abortion was a constitutional right without a concrete factual and medical record to review in either case.

The lack of a factual record brought up additional questions about standing and whether there was an actual case or controversy. At no point in the lower court hearings did the parties present evidence. There was no criminal trial, no one presented medical testimony, and no one cross-examined a witness. As the attorney representing the state of Georgia, Dorothy Beasley, acknowledged, the state cases had proceeded as if “the facts don’t matter.” These initial red flags, Forsythe maintains, “suggest that the Court should have reached no decision, or sent the case back for trial, or taken other cases with a trial record, or at least reached a narrow decision.”

Instead, the Court considered abortion entirely in the abstract and spun off a decision that treated legal precedent and history with as little concern as the facts of the actual cases. The most relevant line of precedents for the issue of abortion stemmed from Griswold v. Connecticut (1965), a case that invalidated a state anti-contraception statute under a constitutional right to privacy in marriage. Yet during oral arguments in Griswold, the justices considered and rejected the idea that the legal principle involved in Griswold would extend to abortion. “I take it abortion involves killing a life in being, doesn’t it?” Justice Brennan asked during oral arguments. “Isn’t that a rather different problem from conception?” With this Griswold’s attorney, Thomas Emerson, agreed.

Either Brennan was bluffing in 1965 or his views had changed dramatically by the early 1970s. About the same time oral arguments were getting underway in Roe and Doe, Brennan wrote the decision for the Court in Eisenstadt v. Baird (1972), an Equal Protection case that invalidated a state ban on the sale of contraception to single people. In his opinion Brennan insisted that if “the right of privacy” championed in Griswold “means anything, it is the right of the individual, married or single, to be free from unwarranted governmental intrusion into matters so fundamentally affecting a person as the decision whether to bear or beget a child.” As a former clerk to Justice Blackmun, Edward Lazarus, later recalled,

Eisenstadt provided the ideal opportunity to build a rhetorical bridge between the right to use contraception and the abortion issue pending in Roe. And taking full advantage, Brennan slipped into Eisenstadt the tendentious statement explicitly linking privacy to the decision whether to have an abortion. As one clerk from that term recalled, ‘We all saw that sentence, and we smiled about it. Everyone understood what that sentence was doing.’ It was papering over holes in the doctrine.

Brennan’s rhetoric in Eisenstadt connected the right to marital privacy in Griswold with the right to abortion in Roe. (And, indeed, Blackmun quoted the “bear or beget” line from Eisenstadt in his Roe opinion.)

Eisenstadt may have papered over some holes in the doctrine, but others remained. The Supreme Court’s post-New Deal civil liberties jurisprudence had increasingly emphasized history as an objective guide to interpreting constitutional provisions. In order to interpret the Constitution “free of emotion and predilection,” Blackmun insisted, the Roe Court accordingly “placed some emphasis” on “medical and medical-legal history.” Forsythe relies heavily on the work of Villanova law professor Joseph Dellapenna to demonstrate that the history the Court relied on was (a) false and (b) the people who wrote the history knew it was false. In the 1960s, activist legal scholars crafted a new historical narrative for the explicit purpose of legal advocacy.

Blackmun cited one such scholar, Cyril Means, seven times in his Roe opinion. Means, a New York Law School Professor and general counsel for the National Association for the Repeal of Abortion Laws (NARAL), made two novel claims in law review articles published in the late 1960s and early 1970s. First, he argued that abortion was a common-law liberty at the time of the American founding. Second, he argued that protecting unborn children was not the purpose of anti-abortion statutes passed in the middle of the nineteenth century. Instead, Means asserted, the sole purpose of the anti-abortion laws was the protection of women from dangerous abortion procedures. Neither of these claims is true, but truth was never the point of Means’ scholarly project. The point was to offer a way for the Court to strike down these century-old statutes while ostensibly maintaining continuity with American history. “Where the important thing is to win the case no matter how,” Yale law student and legal intern David Tundermann wrote in a revealing memo to one of Jane Roe’s lawyers, Roy Lucas,

I suppose I agree with Means’s technique: begin with a scholarly attempt at historical research; if it doesn’t work, fudge it as necessary; write a piece so long that others will read only your introduction and conclusion; then keep citing it until courts begin picking it up. This preserves the guise of impartial scholarship while advancing the proper ideological goals.

The truth is nearly the opposite of what Means had claimed. As Dellapenna and others have meticulously documented, abortion was always treated as a serious criminal offense at common law. Although evidentiary rules made abortion prior to quickening largely unindictable, abortion was never considered to be anything akin to a constitutional right. Additionally, the historical record clearly demonstrates that the primary stated purpose of the nineteenth century anti-abortion statutes was the protection of unborn children.

Another spurious historical claim trumpeted by advocates of abortion reform in the 1960s and 1970s was that thousands upon thousands of women died annually from illegal “back alley” abortions. In a 1968 law review article, Roy Lucas claimed illegal abortion took the lives of “ten thousand American women each year.” Others, such as the founder of NARAL, Dr. Bernard Nathanson, put the figure at “5,000 to 10,000 deaths a year.” Nathanson later confessed, “I knew the figures were totally false, and I suppose the others did too if they stopped to think about it.” The figures were, indeed, absurd. According to the National Center for Health Statistics (NCHS) available at the time, total maternal deaths from all causes had steadily declined from 7,267 in 1942 to 780 in 1972. In 1972, the NCHS listed total “abortion deaths”–which included both spontaneous miscarriage and illegal abortion–at 140.

Many activists repeated such dubious historical claims because they thought the end of abortion reform justified deceptive means. In “the ‘morality’ of our revolution,” Nathanson later wrote of the common but outrageous maternal deaths estimate, “it was a useful figure, widely accepted, so why go out of our way to correct it with honest statistics?” Although the success of the reform movement made use of these statistical and historical falsehoods, Forsythe chronicles many other cultural, social, and legal factors that contributed to the movement against the states’ longstanding abortion restrictions.

These include the campaign against population growth, increased marketing of the contraceptive pill in the 1960s, funding and support from wealthy benefactors such as John Rockefeller and Warren Buffet, and the American Medical Association’s eventual endorsement of abortion reform. The political and cultural movements were well underway in 1973 when the Supreme Court tried to fashion a national solution to the abortion issue.

Forsythe suggests that had the Supreme Court not stepped in when it did, we likely would have ended with a politically untidy resolution “in which most States, perhaps, retained their criminal prohibitions but some experimented with broad exceptions.” This is what will happen if the Supreme Court overturns Roe v. Wade tomorrow.

Getting rid of Roe will not automatically criminalize abortion. Instead, state legislatures will be forced to craft abortion policy that more accurately reflects public opinion in their state. “For example,” Forsythe speculates, “ten to twelve states might maintain abortion on demand as under Roe, ten states might prohibit abortion except to save the life of the mother, and thirty states might move toward a more restrictive policy than that allowed under Roe.” The political solution is not great, and it will not satisfy activists on either side of the debate. But it is plausible, and it is better than what the Supreme Court bequeathed in Roe.

Forsythe, a man who has spent his life for pro-life causes, makes a strong case for returning the issue back to American legislatures and renewing the public debate about the “foundation for equal dignity and human flourishing in our democratic republic.” As Forsythe shows in Abuse of Discretion, that debate has been stunted and skewed by a badly reasoned decision imprudently rendered by an inept Court with disastrous political consequences that continue to haunt us today.

Double Standards for the Police

The Original Understanding of Substantive Due Process

There is nothing the Court can do that will have democratic legitimacy. It ought therefore to be content with constitutional legitimacy.

Dissenting from Natural Rights Nationalism: A Reply to Randy Barnett

We are told that judicial engagement will not lead to dueling natural rights jurists usurping republican government. But what rights do they see?