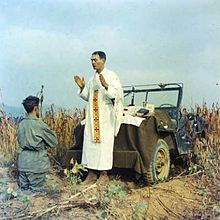 Father Emil Kapaun celebrating Mass using the hood of a Jeep as his altar, Oct 7, 1950.

In a moving White House ceremony Thursday President Obama posthumously awarded Fr. Emil Kapaun, a Catholic priest, the Congressional Medal of Honor for the extraordinary care he gave his fellow soldiers during the Korean War, often at the risk of his own life. Army chaplain Kapaun died in a North Korean prisoner of war camp, after keeping his comrades’ spirits up.

One example of Fr. Kapaun’s nerve:

In the camp, the priest administered sacraments, foraged at night for food, and encouraged the Americans to live. For his extraordinary spiritual devotion the Catholic Church has declared him “a servant of God.”

In addition to interesting political asides, the occasion illustrates the contemporary ordeal of religious liberty. Obama had his political motives for honoring a Catholic priest. And of course he couldn’t resist spotlighting himself: “Now, I obviously never met Father Kapaun.  But I have a sense of the man he was, because in his story I see reflections of my own grandparents and their values, the people who helped to raise me.  Emil and my grandfather were both born in Kansas about the same time….” (May the ceremony discomfort the North Korean despots as they suck on their kimchi.)

Moreover, while some media took note of Fr. Kapaun being a Catholic priest—see for example the Washington Post lengthy account of his heroism and the grateful veterans who pressed the case for the Medal–others slight that fact, as in Brian Williams’ account for NBC Nightly News.  In the NBC reportage, a casual viewer could readily overlook that it was a Catholic priest who was being recognized.

All Americans should be grateful that President Obama, whatever his motives, honored Fr. Kapaun. For one thing, his noble example vindicates the case of the Catholic Church against Obamacare’s HHS Mandate. The Church believes the bureaucratic requirement for contraception, sterilization, and, ultimately, abortion coverage in health insurance provided by Catholic employers, including parishes and dioceses, violates religious freedom by subsidizing conduct that violates Church teaching. Against this view, the bureaucratic imperative demands uniformity among employers, equal treatment in the name of justice.

The example of Fr. Kapaun upbraids Obama’s bureaucracy. It would simply transform Fr. Kapaun into a non-person to separate his heroic deeds (and in particular his struggle to administer sacraments in the POW camp) from his priesthood. He risked his life, defying murderous guards, because he knew his physical existence was only in service of a higher duty, love of the ever-living God. Finally, he prayed for the captors who led him off to death.

Another person could have hoarded food for himself and attempted to transcend the hell about him, by retreating into a solipsism, in an effort to survive. For some, religious conscience might be that narrow and private a matter—but not for this Catholic priest, nor for many other Americans who want to exercise their religious freedoms. We honor Fr. Kapaun even more than the President did, if we realize that his fight in Korea illustrates our contemporary struggle to preserve religious liberty.

There is every reason to conclude that Montana's Blaine Amendment violates the Free Exercise Clause.

The trial of an MP and a Lutheran bishop will reveal how far the progressive erosion of religious freedom has gone in the Nordic countries.