Few public figures in the world were so utterly dull and lacking in apparent human interest until recently as the President of France, François Hollande, who even made an electoral virtue of his dullness by comparison with the meretricious firework sparkle of his predecessor, Nicolas Sarkozy. He promised to be a ‘normal’ president, though whether a normal person devotes his whole life to politics, as M. Hollande has done, was something I rather doubted from the first. Whenever I read something that he said I could not help but think of Doctor Johnson’s opinion of Thomas Sheridan: ‘Sherry is dull, Sir, naturally dull; but it must have taken him a great deal of pains to become what we now see him.’ Indeed, for the psychologist and sociologist, M. Hollande was outwardly so dull that he posed a puzzle: how could so dull a man have become so prominent? He was one of those strange careerists who rise without trace. 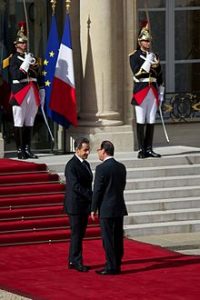 M. Hollande, though, has turned out to be a dark horse, and has amused the entire world in spite of never having said anything in the least amusing, at least in public. He has appealed to two of the most common characteristics of the human mind, prurience and salacity, characteristics which the French falsely imputed specifically to the psyche of the Anglo-Saxons. They may say in surveys that the President’s private life does not lower them in his estimate (not that that would be easy to do, he being already so unpopular), in part to distinguish themselves from the supposedly puritanical but deeply hypocritical Anglo-Saxons, but they read the latest revelations with all the enthusiasm of voyeurs peeping through keyholes.

M. Hollande has defended his right to privacy with the ferocity of an outraged sheep. He is not very formidable, but he is obstinate. And in principle, I agree with him: his private life is his own affair and I dislike the kind of journalism that appeals to our lowest tastes. Who would want his own life examined and reported upon in the same way? I am no more wicked than the next man, but I have my secrets. The danger of journalism unrestrained by any sense of propriety is that it discourages all but the most ambitious thick-skinned nonentities – François Hollande, for example, or David Cameron – from seeking high public office.

But the restraint of journalists should arise spontaneously from a sense of decency and propriety, not from fear of prosecution under laws laid down allegedly to protect privacy. Such laws would be all too easy to use as censorship of fair and essential comment; besides, there comes a point at which the private lives of those in high office do become an affair of state. You can’t get a more private matter than a man’s state of health, but electors increasingly feel they have the right to know their politicians’ clinical condition. Similarly, a man’s obsession with his private affairs may unsuit him for public office. The point at which this happens is a matter of judgment; where cultural norms are frivolous and crude, as they now are in most of the western world, judgment will be frivolous and crude.

But it is not easy to feel much sympathy for M. Holland: not because, despite everything, he maintains his extremely dull exterior, but because he is a miserable little hypocrite. Before he was elected President he promised the French electorate that, if elected, he would be exemplary at all times and in all things, in obvious contradistinction to his predecessor, on behalf of whom even his most fervent supporters would not make no such claim. But a man who makes such a claim on his own behalf is either totally lacking in self-knowledge or, more likely, is an unprincipled scoundrel. (As Hamlet might have put it, a man may be dull, and dull, and be a villain.) A truly upright man does not go around proclaiming his uprightness. And if M. Hollande now rails against the Puritans, he ought to remember that it was he who accepted their values and code of conduct in the first place. He did so, of course, for short-term electoral advantage; even he would hardly dare claim that his conduct had been exemplary, a beacon to all the adult males of France.

If only he had been married, how much easier things would have been for him! But he refused to marry in the same way that a perfectly respectable man nowadays sports an earring, as proof that he is an individual and can think for himself. If only he had been married he could have taken his part in the long succession of happily-married French Presidents with a mistress: then truly the French population would have forgiven him and shrugged the news off as trivial and uninteresting. It is a civilized tradition.

However, he is not married to his companion, Valerie Trierweiler, known to some (who would otherwise not have been censorious) as the First Concubine. The latter has an office and servants paid for by the French state, that is to say the French taxpayer, and while the taxpayers might be ready to accept one unmarried companion of the President, they will not accept two. Already the President has been mocked as a firm advocate of Mariage pour tous (Marriage for All, that is to say for homosexuals), except for himself. Perhaps he is softening up the French population, in the usual liberal way, to accept polygamy.

Irrespective of the legal and constitutional complications (who exactly is he going to take with him on state visits, and at whose expense?), M. Hollande has not behaved well. He knows it too; for he pointed out in public that the wife or consort of the President has no legal, only customary, status. That is the equivalent of what people say who have been caught doing something disreputable or nasty: ‘There’s no law against it!’ Maybe not, but it’s still wrong. No one when praised for their good behavior says, ‘There’s no law against it!’ So François Hollande speaks and acts in bad faith. We all do so sometimes, of course, but it is a matter of degree and its importance depends upon the position of trust that we hold.

Valerie Trierweiler’s reaction to the revelations demonstrates that some French women, at least, are not quite as relaxed about their husband’s or companion’s infidelity as is sometimes pretended. My guess, though I have no proof, is that she took an overdose. It might of course be argued that she was upset more by the public humiliation than by the President’s conduct itself, in which case the yellow journalism was to blame; but overdose after the discovery of infidelity is not uncommon. And if it is an important part of morality that one should not cause avoidable distress to others, then the President has behaved badly. If there is one lesson to be learnt from the affair, it is that human relations cannot be emptied of their moral significance, nor can law replace, account for, or regulate that significance.

Reading Tocqueville in Qatar and Georgetown

The Dismal Results of Dirigiste France

The 15:17 to Paris: A Misfire from Clint Eastwood

In The 15:17 to Paris, Eastwood undermines a potentially excellent reflection on heroism with unorthodox casting.