George W. Bush’s presidency had its problems, but Bush’s “Trumanesque,” plain-speaking style provided a certain clarity to American foreign policy. Granted, Bush had a propensity to mangle the English language, but generally speaking the American public and foreign leaders knew where he stood. His penchant for plain speaking occasionally got him into trouble, for in as much as Bush’s macho swagger turned off the more sensitive among us, his boasting about “bring ’em on” (regarding attacks on American forces in Iraq) or “there’s an old poster out West… that said, ‘Wanted, Dead or Alive’” (regarding the fate of Osama Bin Laden), was seen as positively imbecilic.

Mimicking the antics of George Costanza, the Obama team seems to think that by doing the opposite of George Bush they will usher in an era of universal peace and happiness. The administration recoils from Bushian bluntness, and in so doing emphatically rejects George Orwell’s advice regarding the importance of precision in language. Nowhere is this more evident than in the language the Obama administration employs when discussing the war formerly known as the “war on terror.” Regarding the latter phrase – the administration prefers more rhetorically uninspired and inoffensive language such as “Overseas Contingency Operation.” (The Obama administration also rejected the term “The Long War.”) Needless to say, “Overseas Contingency Operation” lacks a certain Churchillian flair.

While legitimate criticism was raised about the ill-defined, open-ended quality of Bush’s war on a “concept,” i.e., terrorism, the Obama administration prefers to avoid using the term “war” altogether – and at the same time prefers the term “violent extremism” instead of “terrorism.” Former Secretary of the Department of Homeland Security, Janet Napolitano, the Queen of semantic obfuscation, preferred the term “man-caused disasters” instead of “terrorism.” It is almost as if the Obama administration believes that by refraining from uttering the “t” word, terrorism will simply go away.

The administration’s use of opaque language may seem somewhat unimportant, but when this neutered jargon is coupled with a “foreign policy” of “leading from behind,” one cannot help but conclude that this is a nation in retreat. Echoes of this retreat can be found in Attorney General Eric Holder’s testimony before the House Judiciary Committee on May 13, 2010, in which he was reluctant to use the term “radical Islam” or the word “terrorism” in attributing a motive to the Times Square bomber, Faisal Shahzad. The latter was a protégé of Anwar al-Awlaki, an American citizen killed in a drone strike in Yemen in 2011. Far too many libertarians, in concert with the American Civil Liberties Union, have expressed concern about this defector being deprived of his right to due process, but that is a posting for another day. Holder testified before Congress, “There are a variety of reasons why people have taken these actions . . .We’re in the process now of talking to Mr. Shahzad to try to understand what it is that drove him to take the[se] actions….” Mr. Shahzad could not have been clearer about his motives, which was to assist in the destruction of the United States, a cause he undertook at the behest of the aforementioned Anwar al-Awlaki.

The same ambiguity surrounded the arrest of the “Underwear Bomber” Umar Farouk Abdulmutallab, who attempted to bring down a Northwest Airlines flight traveling from Amsterdam to Detroit on Christmas Day, 2009. The “Underwear Bomber” was another al-Awlaki disciple, and instead of being treated as an unlawful enemy combatant and shipped off to Guantanamo, the administration treated him as a common criminal and read him his Miranda rights, at which point the failed mass-murderer stopped talking. 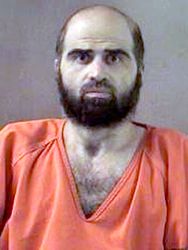 But the most egregious situation of all involved the Fort Hood shooter, Major Nidal Hasan, who killed 13 soldiers and wounded 31 others in November, 2009. During his killing spree, Hasan methodically targeted soldiers in uniform and avoided shooting at civilians. The Obama administration, primarily through the Pentagon, has insisted that the shootings were a case of “workplace violence,” despite the fact that Major Hasan has unambiguously stated that his jihad was, once again, carried out at the behest of Anwar al-Awlaki.

The Pentagon has also refused to award the “Purple Heart” medal to victims of the shooting due to its classification of Hasan’s attack as “workplace violence.” Hasan carried a business card which read in part “SoA (SWT)” – many intelligence experts believe that this was shorthand for “soldier of Allah,” while the last three letters refer to “Subhanahu Wa Ta’all,” meaning “glory to God.” The Defense Department’s report on the Fort Hood shootings, Protecting the Force: Lessons from Fort Hood, never once mentioned Hasan’s connection to Anwar al-Awlaki or to radical Islam in its entire 86 pages. Anwar al-Awlaki proclaimed Nidal Hassan a hero, noting that “he is a man of conscience who could not bear living the contradiction of being a Muslim and serving in an army that is fighting against his own people…. Any decent Muslim cannot live, understanding properly his duties towards his Creator and his fellow Muslims, and yet serve as a US soldier. The U.S. is leading the war against terrorism which in reality is a war against Islam.”

To make matters worse, General George Casey, the former Army Chief of Staff, observed that “what happened at Fort Hood was a tragedy, but I believe it would be an even greater tragedy if our diversity becomes a casualty.” It appears that Hasan remained in the military due to the imperative of fostering “diversity.” Despite repeated warning signs, which included intercepted communications with al-Awlaki, and his failure “to meet basic standards sets for officers for physical fitness, appearance and work ethic,” Hasan remained in good standing with the Army up until the day of the massacre.

Additionally, America’s descent into the quagmire of “war by lawyer” can be seen in all its garishness during the protracted proceedings over the status of Major Hasan’s beard. After weeks of haggling, a military appeals court removed Colonel Gregory Gross as the presiding judge in Hasan’s court-martial, in part due to his alleged bias toward the defendant which included an order that Hasan shave his beard in accordance with Army regulations. As I have noted before, excessive legalism in military matters represents a remarkable ceding of the war power to executive branch lawyers (including military JAG officers) and to their brethren in the judiciary who are playing a role they were never intended to play. All of this leads to widespread acceptance of the idea that war is an extension of law enforcement. But that is less important than the fact that we can persist in “celebrating diversity,” all the while hoping that the war which began at approximately 8:46 a.m. on a sunny Tuesday in September will simply go away.

The views expressed here are entirely those of Stephen F. Knott.

The Bases for Originalism

The Feds Should Not Regulate Colleges’ Policing of Student Misconduct

Liberty is lost in moral panics: we ought to remember this when we ask the federal government to offer rules for handling campus sexual misconduct.

The Constitutionalism of Caprice

Presidents come and go but so, as defenders of DACA ought also to know, do judges.

The Obama Administration Is Helping Raise Your Airfares