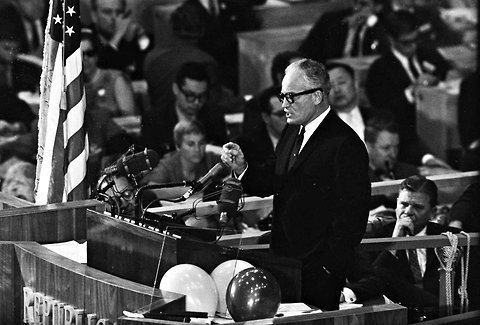 As the American people go to the polls in an election which, both parties tell us, will decide the country’s future by determining which of them will have a majority in the Senate, Ronald Reagan’s October 27, 1964 speech “A Time For Choosing,” the golden anniversary of which came last week, leads us to ask what choices the Republicans and Democrats are giving us in 2014, and what difference the success of either makes.

This is the issue of this election: Whether we believe in our capacity for self-government or whether we abandon the American revolution and confess that a little intellectual elite in a far-distant capitol can plan our lives for us better than we can plan them ourselves.

That was an accurate description of that election, but only because Goldwater had won the Republican presidential nomination promising “a choice, not an echo” – and meant it. Goldwater and Reagan were rebels against the Republican Party. Their call for a return to self government threatened the government power on which the social position and wealth of both parties’ establishments depends. Accordingly the Republican establishment, followed by the Democrats, called them extremists, Fascists, racists, etc.

Fifty years later, more than ever, the Democratic Party and its Republican establishment followers are all about enlarging their grip on the material and moral substance of American life and besmirching anyone who challenges their authority to do so. The contrast between America’s ruling class and the rest of us is sharper than ever. The partisan rhetoric of American elections has changed little in a half century. But, since the passing of Goldwater and Reagan, no personage of national stature has arisen who has transcended the Republican establishment. Hence, while America’s situation in 2014 resembles that of 1964, the electoral choices do not.

In 2014, neither party offers the American people the opportunity to re-establish self-government. Rather, Democrats energize their constituencies by insulting outsiders, and Republicans dishearten theirs by courting the insiders. In a nutshell, the Democratic Party wins elections by getting ever-greater percentages of the vote from ever-narrower constituencies – the ruling class and its dependents – and does so by stoking their sense of superiority and/or grievance against the rest the country in general. The Republican Party has been losing elections by getting ever-smaller percentages of the vote from the country in general, which it tries to court without offending the Democrats’ constituencies.

Politics in 2014 is not about any issue as Goldwater and Reagan defined the term. It has degenerated into a kind of war over whose identity will prevail over whose.

Democratic pollster Cornell Belcher’s reminder of the Democrats’ dependence on the black vote merely reprised the U.S. Census Bureau’s report (link no longer available) on the 2012 election. To wit: Democrats lost the white vote 60/40, but got 91 % of the black vote. The turnout among blacks, 12% of the population, had risen by 6% over the previous eight years while the turnout by whites, over 70% of the population, had dropped by over 3%. This one disparity in turnout and yield gave Democrats an electoral edge of about 1% of the national vote. Food stamps and other forms of welfare motivate this constituency less than appeals to its sense of resentment, entitlement, and revenge. No surprise then that, as the New York Times reported last week, “Democrats in the closest Senate races across the South are turning to racially charged messages…to jolt African-Americans into voting … The images and words they are using are striking for how overtly they play on fears of intimidation and repression.”

The Democratic Party approaches its other constituencies similarly. America’s richest and most influential communities – e.g. Montgomery County, MD; Boston’s Weston-Wayland suburbs; Palo Alto, CA; plus university towns, nearly all white – vote Democratic in percentages comparable to those of black precincts. This other minority at the opposite end of the socio economic scale provides campaign cash and intellectual-moral top cover to Democrats less in exchange for the contracts, grants and consultancies that it receives from government than because the Party’s championing of abortion, gay rights, and condemnation of lesser Americans’ habits, stokes its sense of superior intelligence and advanced morality as well as its sense of entitlement to rule.

What seems superficially to be the Democrats’ appeal to a natural majority — females — is similarly divisive. In 2012, 55% of females voted Democrat (to 45% of men). But Democrats got only 43% of married women (and widows). Their favorable female “gender gap” is due almost entirely to the fact that the 17% of the adult female population who are unmarried or divorced voted Democrat by a ratio of roughly 70/30. The Democrats secure this minority’s support less by any benefits they provide for it than by flogging the specter of a “war on women.”

By contrast, whom or what the Republican Party does not represent is clearer than what it does represent. There is no doubt that the Democratic Party is mobilizing its supporters on the basis of a kind of war on their fellow Americans. It is just as clear that the Republican Party is neither marshaling constituencies to answer in kind nor even defending any of the persons, groups, and ways of life who are the targets of the Democratic constituencies’ animus. Much less does the Republican Party offer the choice that Goldwater and Reagan wanted the American people to have. America has been going in its current direction for a generation, under Republican presidents and congresses as well as under Democrats. Our problems are bipartisan.

A half century after Ronald Reagan spoke, ours is still very much “a time for choosing.” More than ever, we lack a political instrument for doing so.

Classical Liberal Resolutions for 2017: Part I