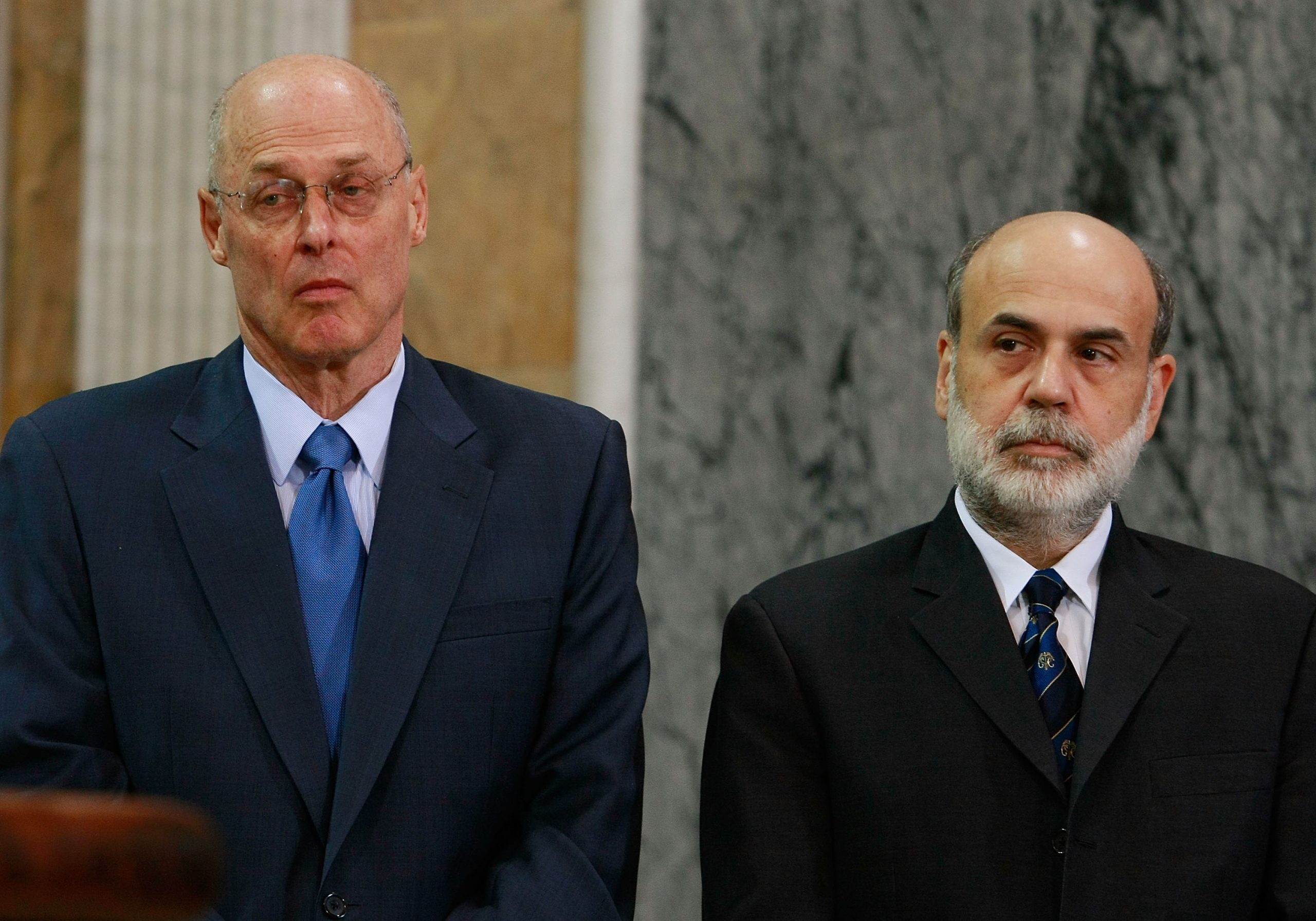 When surveying the vast wreckage of the 2008 financial crisis, many classical liberals worry that the most profound damage done was to the rule of law in America.  Though it is difficult to pin down the concept with great precision, the core of the rule of law is simple: we have a government of laws, not men.  Our officials must follow rules that have been publicly and clearly set forth in advance rather than acting on their own caprice, and they are not welcome to simply make up rules as they go along and declare their conduct lawful in retrospect.  Without adherence to this precept, government’s actions can have no basis for legitimacy.

If we closely scrutinize what the Treasury Department, Federal Reserve, and other agencies of the federal government did in response to the recent financial crisis, there is no avoiding that they made a mockery of the rule of law.  Indeed, as Lawrence H. White puts it, “The approach of Federal Reserve and Treasury officials during this crisis, unfortunately, has been to consider every possible remedy but applying the rule of law.”

I shared something close to this view as I watched the crisis unfold, and my sense that the rule of law had become a victim to the crisis responses led me to undertake a deeper exploration of the issue, one that would grapple with the conceptual particulars of the rule of law as well as historical precedents set by other crisis responses.  The result of that work is my new book, To the Edge: Legality, Legitimacy, and the 2008 Financial Crisis (Brookings Institution Press).

My research largely changed my mind.  The rule of law, properly understood, has a more limited scope than many of its champions seek for it.  Legality is not the sole basis for government legitimacy; indeed, I argue that legality is neither necessary nor sufficient for an action to achieve legitimacy.  Instead, citizens may accept government actions as legitimate for other reasons: because they believe an action was truly necessary to fend off some imminent harm; because they trust their leaders; or because they believe adequate non-legal mechanisms to hold officials accountable make the risks of legally questionable actions acceptable.

Within the classical liberal tradition, there is actually considerable recognition of the limits of the law, especially as it relates to crises.  Alexander Hamilton, in Federalist No. 72, takes care to separate out a sphere of “administration of government” for the executive to decide on its own terms, and this includes core functions of foreign negotiations, organizing the army and navy, and conducting war.  F.A. Hayek’s frequent paeans to legal generality notwithstanding, he explicitly conceded in the Constitution of Liberty that it is neither desirable nor practicable in every situation (see especially Chapter 10).  Lon Fuller called attention to the limits of his “morality” of law, and warned that such areas as taxation, control of the military, and “tasks of economic allocation” are fundamentally unsuited to the forms of law, which if applied would “result in inefficiency, hypocrisy, moral confusion, and frustration” (The Morality of Law, 168-174).  Both thinkers warned of the damage to the rule of law that would result if people mistakenly believed it to extend to all of the government’s actions, thereby creating an impression of arbitrariness and hypocrisy where none was warranted.

War is obviously the paradigmatic case here.  Even if we might condone wartime executives’ departures from the law (Lincoln, Wilson, and FDR all furnish tasty examples), financial crises may not deserve to be put in the same category.  Unlike in a war, and especially a total war, a financial crisis should not create any existential anxiety; rules that may bend when many lives are at stake should hold firm when only fortunes are in the balance.

Perhaps—but rules do not apply themselves, and the history of financial crises in America gives ample reason to doubt whether public officials will be willing to impose significant financial losses for the sake of obedience to rules, even clear ones.  In bank runs throughout the nation’s history, legislatures and courts alike have shown a willingness to temporarily suspend depositors’ legal rights as a means of saving institutions that would otherwise fail.  In his excellent Misunderstanding Financial Crises, Gary Gorton offers a choice quotation from William Graham Sumner that captures the fundamental dilemma of deciding the fate of banks trying to save themselves: “in which a restriction to be effective must be intensely severe, and if it is intensely severe, proves impracticable when it is needed.”

So stalwart legalists should temper their expectations about just how firm the rule of law will be in crises, both military and financial.  Their purity of legal mind (if that is how they choose to see it) is shared neither by officeholders nor by most of their fellow citizens—who will by and large judge actions on other grounds, and will praise to the heavens (or at least have the courtesy to promptly forget about) such deviations from the law as they believe ultimately serve the public good.  A kind of prerogative necessarily inheres in the government’s power and the people’s willingness to accept its beneficent uses, whatever the theoretically-minded like to believe about the rule of law.

To give just one example of this dynamic in action, take what was probably the most legally ridiculous action of 2008: the Treasury Department’s September 2008 rescue of money market funds using the Exchange Stabilization Fund (ESF).  The ESF was, in 1934, set up to empower shadowy American currency warriors to do battle with shadowy British currency warriors, making its very existence somewhat awkward for the rule of law.  (And yes, somewhere on the Internet, there is someone who thinks it is at the center of nefarious global conspiracies.)  But it is not wholly without legal limitations, and at the very least it is clearly meant to deal with matters of international finance and foreign exchange.

The ESF had never been used for anything remotely like a guarantee of a class of domestic assets, and the best Treasury could say to justify this use was that, if the American economy went through the floor, that would surely affect the value of the dollar.  By the time Treasury’s top lawyer at the time reflected on this justification in 2011, he could barely keep a straight face (start around 11:00 of this video).  But it worked, marvelously, stopping the crisis from worsening at a crucial moment.  Very few citizens regret that fancy legal footwork, if they remember it—in spite of its huge importance, it doesn’t make the cut in HBO’s version of history.  Even among legal formalists in the academy, you will be hard pressed to find any energetic criticism.

But if we lower our expectations for the rule of law and accept that successful improvisations like the use of the ESF are likely to be accepted as legitimate, that hardly means that everything that the Bush and Obama administrations did to respond to the financial crisis gets a pass.  In my book, I dub the dominant mode of crisis response “adhocracy,” for the persistent failure to define clear, unifying principles of crisis response.  This was understandable in March 2008, when the Federal Reserve’s scrambling to prevent a collapse of Bear Stearns led Paul Volcker to uncomfortably state that the Fed had “take[n] actions that extend to the very edge of its lawful and implied powers.”

This becomes harder to accept as necessary six months later when Fannie Mae, Freddie Mac, Lehman Brothers, AIG, and the money markets forced another round of ad hoc solutions—or non-solutions, in the case of Lehman.  And harder still in the Obama years as the FDIC performed various acrobatics, the Treasury invoked the exigency of the crisis to justify express bankruptcies for Chrysler and GM featuring side-deals favoring the UAW, and Fannie and Freddie experienced legally dubious reorganizations in conservancy.  These late maneuvers departed from the law in ways that hurt mostly publicly unsympathetic interests, so they did not generate any widespread backlash, but there are many reasons to lament the extension of the adhocracy for so long.  We can afford to have higher hopes for the rule of law in normal times than in crises, and so the large pockets for unpredictable government discretion that persist even after recent financial reforms are a cause for concern.

When thinking about what the rule of law will mean in practical terms going forward, those who find it a worthy ideal should think carefully about what it is they want.  From both the Left and the Right, there are serious thinkers who believe that the concept is more trouble than it is worth and believe it should be abandoned as anachronistic.  I generally think these critiques are hyperbolic: even if the law is an imperfect and limited tool for rendering government actions predictable, it is nonetheless one of the most effective we have.

The focus should be on when and how law is most useful—for more on which in the context of financial crises, consult To the Edge.  As in so many policy areas today, we must select from what kinds of choices our beleaguered legislature has a comparative advantage in making. The proper role for legislature-made law remains significant, frequent snide jokes about Washington aside.  Our government’s ability to produce legitimacy remains inextricably tied to the rule of law.  That admittedly fuzzy concept needs to be interrogated and improved, not carelessly discarded.