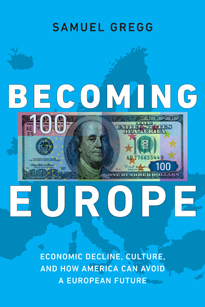 The only political prediction which I am proud to have made is that there would be demonstrations on the Boulevard St Germain if, in response to the riots in the banlieues of French towns and cities in 2005, the French government attempted the slightest liberalization of the French labor market. And so it proved: thousands of young people came out on to the streets to protest against what was really only a straw in the wind or a cloud on the horizon. They were protesting, in fact, against the potential withdrawal not of the privileges that they now enjoyed but that, as children of the prosperous and the fully-employed, they hoped to enjoy in the future.

It never occurred to them that the employment protections of some are the exclusion from the labor market of others. They were, in effect, like the white miners of the Witwatersrand in South Africa who went on strike in 1922 against the use of black miners as an economy measure by the mine owners. Their slogan, under the leadership of the South African communists, was ‘Workers of the world unite for a white South Africa.’

By attempting even a slight liberalization of the labor market the French government was implicitly recognizing that the market’s rigidity was responsible for high rates of unemployment; but few French politicians, or those of any other European country, dared draw general conclusions from, let alone make policy decisions as a consequence, of this. One of the reasons, indeed, that Mr Cameron has proved so utterly incompetent, worthless and morally nugatory a leader is that, before he was elected to office, he never tried to explain to the electorate the deep-seated reasons for his country’s disastrous social and economic predicament. For him, sufficient unto the day was the focus group thereof. As a man whose only known employment, other than the search for office, was in public relations, he had, and has, about as much regard for truth as Baron Munchausen; but unfortunately hard and essential policy decisions can be made only if large numbers of people are persuaded, based upon a larger truth, of their necessity. He and his equally nugatory colleagues did nothing to explain unpleasant realities to the electorate, and so it has proved politically impossible for his government to do anything much worthwhile when in office. The contrast with Ireland is striking. Ireland has been able to cut salaries drastically without the slightest social unrest because it was clear to the people that it was necessary to do so.

Truth is that which will not be mocked, but the European political and intellectual elite has long taken a voluntarist view of truth, behaving as if elementary realities will go away if only one ignores or opposes them for long enough. The elite is like the mad inventor who searches for the perpetual motion machine; setbacks only make him, and it, more determined than ever.

In this well-written book, Samuel Gregg explains what can only be called the dialectical relationship between the interests of the European political class and the economic beliefs and wishes of the population as a whole. The population is essentially fearful; it wants to be protected from the future rather than adapt to its inevitable changes, while at the same time maintaining prosperity. It wants security more than freedom; it wants to preserve what the French call les acquis such as long holidays, unlimited unemployment benefits, disability pensions for non-existent illnesses, early retirement, short hours, and so forth, even if they render their economies uncompetitive in the long term and require unsustainable levels of borrowing to fund them, borrowing that will eventually impoverish everyone. Many companies, including the largest, lobby the political class to be shielded from the cold winds of international competition and become, in effect, licensed traders. Having succumbed to the temptation to grant all these wishes, the politicians now dare not admit that they have repeatedly as a consequence to promise three impossible things before breakfast. We all know what to do, said the Prime Minister of Luxembourg, but not how to get re-elected afterwards; and so Pompadourism has become the ruling political philosophy of the day. Madame de Pompadour’s cynical but prophetic witticism, après nous le déluge has become the economic mission statement of almost the entire European political class.

At the same time, the word solidarity in Europe has come to mean transfer payments from one part of the population to another, much of the money naturally enough sticking to the fingers of those state employees who administer the transfer, and who are now numerous enough to constitute a significant and sometimes even preponderant political constituency of their own. Far from promoting real solidarity, however, such a system promotes bureaucratization and conflicts of interest between those who pay and those who receive. When a system of international transfer payments is instituted in Europe, as is the desire of the European political class with the possible exception (for obvious reasons) of the German, Dutch and Finnish, the likelihood of national conflicts is great, and the potential for disaster enormous. Europe is not building a United States: it is building a Yugoslavia, with Van Rompuy as its unlikely Marshal Tito.

Mr Gregg observes this all very clearly, and compares Europe with America. The latter has many advantages over Europe. It has linguistic unity, a growing population, more natural resources, and – above all – a long history of and attachment to economic freedom. There is much more intellectual, political and practical resistance to social-democratic corporatism (a form of fascism without the boot in the face, though that may yet come) in America than in Europe. Many Americans see a moral as well as an economic dimension to opposition to the welfare state, which very few Europeans do. Americans are much more willing than Europeans to accept that freedom is so important that it is worth putting up with the sometimes unpleasant or unsightly consequences of its exercise.

Nevertheless, there are worrying signs that America is taking on some of the worst characteristics of Europe. Its population is becoming more fearful of the future and seeking more legislative protection from competition. The welfare system, though less extensive than that of most of Europe, is quite large enough to be unsustainable. Political lobbying to obtain protection of one kind or another is more important for the prosperity of many American industries than efficiency, competitiveness or innovation. The Republican party, though it makes small-government noises when in opposition, is just as bad as, and sometimes even worse than, the Democrats when it comes to public spending when in office. Everyone wants public expenditure reduced except for his slice of the pork in the pork barrel.

The Swedish social democrats long ago realized that if you render more than 50 per cent of the population dependent, either directly or indirectly, upon the government, it is not necessary to have a one party state: you will have created a one policy state, a policy from which it will be politically very difficult, if not impossible, to retreat. All western democracies have, in effect, tended towards the Swedish model, enthusiastically or tepidly as the case may be. It is clearly President Obama’s wish or policy, whether he acknowledges it in his own mind or not, to build an unbreakable social-democratic coalition in the United States.

There is a simple conceptual solution to this corrupt and corrupting tendency: a constitutional change such that there should be no representation without taxation. After all, to allow people who are economically dependent on the government to vote is like allowing the CEOs of banks to fix their own remuneration. But there are two difficulties with my modest proposal: the first is that to implement it would cause violence so horrible that our likely future situation if we do nothing would be much preferable, and second that it is not altogether easy to distinguish those dependent upon the government and those independent of it. For example, are those who work for Lockheed dependent on the government or not? In the end, then, we are left with no alternative but to try to persuade the voters under a regime of universal suffrage that their short-term interests are not necessarily the same as their long-term ones. This will be difficult, no doubt, but let us hope that it is not impossible, at least before disaster strikes; for disaster is seldom the midwife of wisdom and tends, rather, to destroy elementary decency.

Gregg’s book is a lucid work of political science for the general reader and it is not surprising that it does not always capture the warp and weft of daily life: for example, that markets, as against the Market, are more important in France than in the United States, and of incomparably superior quality. However, this has more to do with the culture of the country than with its political or economic arrangements, and Gregg is very good on the significance of culture (incidentally, the Financial Times recently reported on the difficulties that supermarket chains are having in Turkey, where people still prefer to buy daily from small shops or street markets).

Becoming Europe is directed at Americans, though it is just as important for Europeans: not that I think that it will by itself prevent the ship of state from running aground. Politics has its reasons that reason knows not of.

Greve on the Recess Appointments Decision

Social Democracy Is Not Ending (Unfortunately)

Patrick Deneen thinks liberalism has reached a dead end, but perhaps it is only social democracy whose fate is sealed.

The Liberation of Scrooge

Dickens’ tale is so effective because, in the words of Chesterton, it is targeted not at institutions but “an expression of the human face.”

What Comes After the Welfare State?