Thanks to the vast increase in human productivity over the last few decades economic crises are less easy to discern than they once were. Spain, for example, has rates of unemployment that equal or exceed those of the great Depression in the United States, yet there are none of the distressing scenes, at least so far, which the photographers caught for all time.

It is all too easy to be deceived, however. I have just come back from Madrid and Dublin (I am soon to leave for Lisbon) of which my view is essentially that of a visiting official delegation, driven from the airport to the center of the city and back again, having spent the intervening interval in the pleasant company of prosperous and cultivated people. And the fact is that anyone driving from Barajas Airport to the centre of Madrid would conclude that it was a much richer and better kept city than New York, Paris or London. Such signs of the downturn as I saw in Dublin were subtle and comparative. Going twice to the theatre, for example, I noticed that a third of the seats were not taken, which would certainly not have been the case at the height of the boom when I would have been lucky to get seats at all. (One of the plays was Mrs Warren’s Profession, by Bernard Shaw. What a frightful old windbag he was! That the crisis prevented some hundreds of people from being exposed to his theatrical rodomontade demonstrates that there really is a silver lining to every cloud.) 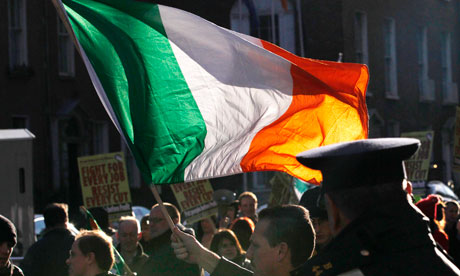 Other signs of the crisis were a few closed restaurants and the increasing neglect of a few of the magnificent Georgian terraced buildings of Merrion Square, now predominantly in use as commercial rather than residential properties: but since I recall quite vividly Dublin of the late 1960s, when I first visited it, these little signs of decline, decay and dilapidation did not impress me greatly. In those days, Dublin resembled a dark and dismal city almost of ruins, inhabited by people with little recollection or awareness of its former grandeur. Of course, the conversation in the pubs seemed better, more witty and spirited than now; the pub was then a refuge from life in a way that it no longer is, for post-crisis Dublin remains incomparably richer, materially, than it was then. Even now, several years into so-called austerity, the Irish live at a higher standard than the Germans.

The Bible tells us that of the making of many books there is no end, and that much study is a weariness of the flesh. Certainly the Irish crisis has acted as a kind of Keynesian stimulus to writers, for the bibliography of the subject is now immense, beyond the capacity of any but an obsessive to have read; but for me it is not a weariness of the flesh, but rather a refreshment of the mind, to read about this story of hubris and nemesis, greed and come-uppance, illusion and reality, especially on the plane home. On my latest visit, I bought another such book, The Big Lie: Who Profits from Ireland’s Austerity? By Gene Kerrigan, a journalist and author well-known for his exposure of the political corruption that has long been a feature, some would say the predominant feature, of Irish public life.

There was a time when Irish economic growth was real and healthy. A small, English-speaking country with a well-educated population and a low rate of corporate taxation with access to what is still the largest market in the world served as a natural destination for foreign investment. This phase raised Ireland from relative poverty to wealth in only a few years. Alas, Ireland then joined the single European currency, and healthy growth gave way to feverish property speculation fueled by the capacity to borrow enormous sums of money at very low rates of interest.

Money doesn’t borrow itself, of course; but the improvidence required to lend and borrow it incontinently is a quality seldom in short supply in any human population. The lenders were falsely reassured by lending in a currency that the borrowers had no power to devalue; the borrowers thought an upward spiral of asset prices could last for ever, into infinity even.

Human folly and greed were not lacking either among the lenders or the borrowers. The spurious or unsound economic activity generated taxes that enabled the government to treat public sector employees with great liberality, and thus create a constituency for itself; ordinary people felt that they were honored guests at the party and partook of the champagne.

In his book, Mr Kerrigan, an avowed socialist, is anxious to absolve ordinary people from any part of the blame for the crisis. They were bombarded by the banks with invitations to borrow money, he says (quite correctly, for the same thing happened on the other side of the Irish Sea). As the housing bubble expanded, people were inveigled into buying apartments or houses the quality of whose construction they later discovered to be shoddy and defective.

Actually, that shoddiness was often evident to cursory inspection; a reasonably observant person would have noticed that the buildings had a suspiciously prefabricated quality to them. And while you can offer a loan to a man, you can’t force him to take it. No, the Irish population participated all right in the dance of the millions (as a previous bubble in Latin America in the first third of the twentieth century was called), and it re-elected the government that conducted the music of the dance. The difference between the greed of ordinary people (or of some ordinary people, a substantial number of them in fact) and that of the bankers was that of scale, not type or quality.

Another important error in the book is the characterization of the crisis as one of neo-liberalism. Actually, it was more the crisis of a corporatist polity than of a laissez-faire one. In a true laissez-faire regime, profits are distributed to the owners of enterprises rather than to the managers of them, who should be paid as little, not as much, as possible; unsuccessful or incompetent staff are sacked unceremoniously, without a cent of compensation; non-payment of mortgages is followed by immediate eviction, and default by repossession; and insolvent banks and other enterprises collapse rather than are propped up. Moreover, if Ireland had had its own currency, any bubble would have burst long before the country became the most indebted in the world, irrespective of the corrupt folly of the politicians that Mr Kerrigan says would have been just the same if Ireland had kept its currency.

Whether a true laissez-faire regime ever has existed or ever could exist is another question entirely. And yet another question is whether the wholesale collapse of banks in Ireland, which would have brought about the collapse of the British, German, French and Belgian banks, and possibly by contagion all the banks in the world, would have been desirable: whether, in fact, there was much alternative but to rescue them.

The rescue could have been effected differently, no doubt, and by people other than the taxpayers of Ireland who through their government have written a sempiternal promissory note. The European Central Bank could have simply conjured the money out of the air, as it was subsequently forced to do on other occasions, without passing on the liability to the Irish state and people. This, however, would have had other undesirable, or undesired, consequences.

Mr Kerrigan expresses anger, surely widespread among the Irish people, that what might be called the banking class has, except for a few sacrificial figures, some of whom face gaol, survived the crisis intact, and thus escaped accountability. I found confirmatory evidence of the banking class’s survival on the Bank of Ireland’s website, which said cheerfully ‘We’ve been spring cleaning!’ – the website, that is, not the bank, whose share price remains rock solid at 0.18 Euros per share, with an annual loss of nearly 10 Euros per share. The site informed readers:

Bank of Ireland today (Friday 22nd March) announced the appointment of Pat Farrell as Head of Group Communications and Government Affairs. Pat is currently Chief Executive of the Irish Banking Federation. Pat Farrell has been Chief Executive of the Irish Banking Federation, the representative body of the banking and financial services sector in Ireland, since 2004. In that position Pat played a key role in managing the response of the banking sector to the crisis in financial services and the extensive programme of regulatory change over recent years. Prior to that, in a wide-ranging career, Pat held a number of senior executive positions in financial services, public affairs and healthcare sectors. These included positions as Head of Marketing and Communications at EBS Building Society between 1998 and 2003, General Secretary of Fianna Fail from 1991 to 1997 and a number of senior positions in health administration, including a period as Chief Executive Officer of Galvia Hospital in Galway. Pat Farrell is a Fellow of the Institute of Bankers in Ireland and a former member of Seanad Eireann. Pat will take up his new role with Bank of Ireland over the next couple of months.

Here one or two notes might help the reader. Fianna Fail was the predominant political party, long associated with the most blatant economic cronyism, during the years leading up to the crisis, and responsible either for causing or not preventing it, or both.

The Seanad Eireann is the Irish Senate, one of the houses of the Irish Parliament. It is a body whose members are mainly co-opted by existing political and economic elite groups rather than elected by the people.

The EBS Building Society (for which Mr Farrell worked) is part of the Allied Irish Banks Group, from whose latest statement one learns the good news that it reduced its dependence on funding from the European Central Bank to keep going from 31 billion Euros in 2011 ($38.75 billion) to only 22 billion Euros ($27.5 billion) in 2012.

Whatever else this is a story of, then, it is not a story of economic liberalism in any recognizable sense.