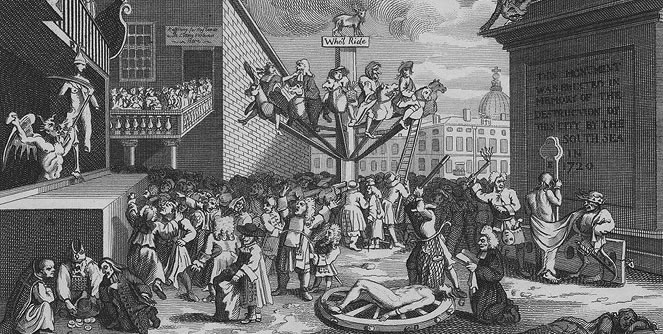 The Industrial Revolution resulted from a repudiation of the ancients—but not just the ancients. The “Great Enrichment” of the late 18th and 19th centuries was a fully “modern” rejection of the cultural inheritance of the Renaissance, to say nothing of the medieval synthesis. The product of cultural innovations in Western Europe, and particularly England and Scotland, a new and paradigmatic culture took form that would produce a global revolution. Human history had witnessed nothing like this cultural rupture that, in an epochal blink of an eye, rendered so much of the past irrelevant.

This is the story told by Joel Mokyr in his fascinating new book, A Culture of Growth: The Origins of the Modern Economy. Mokyr, an accomplished economic historian at Northwestern University, is here challenging cherished narratives and weighing in on several historiographic debates. Among these, he rejects the global modernization argument in which historians have sought to undermine the Euro-centrism of older modernization accounts. Mokyr denies that regional and particularized “modernization” was taking place all across the world at about the same time (and from indigenous cultural resources), but he is at the same time keen to deny the superiority of European civilization.

What happened in Europe was not slow, incremental evolution but rather a series of cultural innovations that could have taken place anywhere, according to Mokyr. Modernity is a rupture in history, and this assertion allows him to be Euro-centric in explanation while blandly—unconvincingly—making modern European culture, technology, and economic transformation into the products of contingent but radical changes.

His greater burden is to understand culture as the most important necessary condition for the modern economic and technological revolution. Causality in human affairs is always bound up with seemingly countless contingent factors interacting with one another in an aleatory fashion. It takes some intellectual daring to speak of causes in this way, but particularly when the causal argument runs through something as complex and elusive as culture.

Mokyr pushes aside an institutional account of the rise of the modern economy. Getting the rules to the game “correct” and making sure the requisite legal protections, banking systems, and so forth are in place—these are inadequate, in his view. In finding them so, he is rejecting a simplistic view of human nature, human choices, and the universality of the economic laws that govern people. Something deeper must have changed (whatever conditions led to this change) for the modern economy to have emerged as it did.

Not only is the author daring enough to give us an account of this something deeper, this contingent and revolutionary change, but he implicitly denies that we can think of humans in terms of unchanging characteristics. As cultural beings, we live, make choices, believe, within powerful frameworks that are often incompatible with other frameworks. The modern European (say, the Victorian businessman) is a different sort of human than the Spartan hoplite—the latter being incapable of behaving like a capitalist until he is culturally transformed.

Oddly, the author devotes little space to defining culture. Recognizing that it is contested territory and therefore stipulating his own basic definition without much defense, he simply says that “Culture is a set of beliefs, values, and preferences, capable of affecting behavior, that are socially (not genetically) transmitted and that are shared by some subset of society.”

The culture that is important here is a small one: an elite culture that transcended national boundaries. Roughly between 1500 and 1700, a cosmopolitan intellectual class emerged that created and perpetuated the cultural conditions that augured the technological and productive bonanza that we call the Industrial Revolution. This “Republic of Letters” was really a community of intellectuals superimposed on a politically and religiously fragmented Europe. The influence and standing of those within this “republic” depended on reputation, which placed a great emphasis on persuasion. The worth they got from their ideas, their inventions, their innovations, was not tied primarily to money but to esteem, which in its own way was marketable.

Such a cultural environment produced something unusual, for rather than seeking to protect their innovations and theories so as to prevent others from using them, this community of intellectuals favored the open exchange of ideas and even of technology. Never before, and nowhere else, had such an open exchange of ideas or a more fluid environment for new thoughts and innovations existed.

No period in human history is without new ideas and technological innovations. So, why was this period so different and why did a few innovations spawn thousands more? Mokyr’s answer concerns the innovators’ beliefs about nature and knowledge, which were aberrational. Historically, humans have sought to preserve knowledge and so they defer to what is handed down. Small technological improvements take place, but always they are products of improvement by doing. Some person realizes that some small change in his farming technique will make his work easier, and perhaps it catches on with neighbors and spreads slowly outward. But even when these innovations catch on and don’t die a regional death, they do not give birth to further innovations because they are not the product of new knowledge, only new techniques. For most eras of human life, the technology that works emerges from practice and not theory, begetting an improved plow but not what Mokyr calls “propositional knowledge.”

Isaac Newton provides a necessary condition to change this dynamic (the book has chapters on the deep influence of Francis Bacon and Newton) by presenting the intellectual class of his day with a law-like nature that is capable of human understanding. If nature is governed by regularities that humans can understand through investigation, then it follows that humans can develop a new kind of knowledge. This new kind describes how things actually work and is thereby a means to turn nature to human purposes and needs.

For intellectual historians of modernity, the story here is very familiar: the dream of progress based on acquired knowledge that steadily and progressively gives humans more control over the environment in which they live. It is an emancipatory view of knowledge and the power that flows from this knowledge, while it is also a dream or vision of a new world that has no need of the old.

For Mokyr the point is that this intellectual environment produced an open market for better accounts of nature; privileged a testing and overturning of old ideas; and stressed the sort of knowledge that can be applied universally. The Republic of Letters was often very insular, but in two centuries it produced a culture of inquiry that would soon transform technological innovation and the cultural norms that governed the beliefs and goals of other classes of people in Europe. The success of this emerging new knowledge and the usefulness of such “scientific” knowledge created a more expansive cultural tendency toward change, progress, as well as hostility toward the ways and beliefs of the past.

The thicket of conditions that helped produce this revolution in knowledge and its attending cultural preferences is too complicated even for Mokyr to trace in great detail, but the deeper claim is that the revolution he describes is a contingent product of historical forces and not the slow development of civilization leading ineluctably toward modernity. Furthermore, Mokyr’s argument requires one to consider that the new paradigm ushered in by what we call modernity has such gravitational power that all other cultures would be altered by its distorting attraction.

A Culture of Growth is compelling in its sweep, and in much of its detail. It implicitly raises as many questions as it answers, including, as a logical extension of a knowledge paradigm that needs nothing from the past, whether that means the ancient world and the medieval world are really an extinction or dead end rather than part of a historical chain of continuity that makes modernity possible. Are cultural and intellectual resources that emerged from pre-modern societies so ill-suited to our environment as to make them useless? To ask this question is to raise yet another: Does modern “culture” suit human needs well?

The categories of recent history are helpful but elusive. The way Mokyr uses the term “modern” applies to a Newtonian world and works best to describe emerging conditions and beliefs through the late 19th century. But if the word “modern” refers to a knowable universe that we can command to make our environment fit our needs, then the modernism that emerged in Europe after 1880 is dedicated more to human caprice, to desires and passions not slaked by comfort or material success, and doubts about knowledge in favor of a primordial creative urge. By my reckoning, we’ve had over a century in which the tensional relationship between modern and modernism, Newton and Relativity, useful knowledge and passionate creativity, has not been resolved.

Mokyr is correct to stress that history is an account of complexity and radical contingency. But it is perhaps equally important to come to grips with what some, but not all, of the citizens of the Republic of Letters forgot: that human history is inevitably tragic.

Hopelessness in the New History

What mars the modern progressive approach to history is the ultimate hopelessness of the narratives that they are spinning.