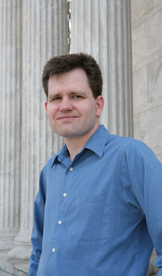 I am very pleased to announce that Keith E. Whittington, the William Nelson Cromwell Professor of Politics at Princeton University, will be blogging @ Law and Liberty for the month of April. I know that we are in store for an interesting array of posts on constitutional jurisprudence and other subjects.

Keith’s books include Constitutional Interpretation: Textual Meaning, Original Intent, and Judicial Review (Kansas, 1999); Political Foundations of Judicial Supremacy: The Presidency, the Supreme Court, and Constitutional Leadership in U.S. History (Princeton, 2007), and American Constitutionalism (Oxford, 2012) (with Howard Gillman and Mark A. Graber). He is currently finishing a history of the judicial review of federal statutes and a collection of source material in American political thought.

The Ethical Mandate for Originalism

Originalism is the way we all want to be read, so why doesn't it have more adherents?

Lawson on the New Originalism

The Judiciary Should Interpret, Not Construct, the Constitution