No Denial: Once Americans, now Egyptians

Was the anti-Morsi coup in Egypt justified on liberal and democratic grounds? The distinguished legal scholars Ilya Somin and Michael Rappaport agree that democracy cannot be defended on the ground of majority rule alone, and I add my voice to theirs but for different reasons. In making their respective critiques of Morsi, Rappaport emphasizes long-run majoritarianism and consensus; Somin the protection of classical liberal principles. Put them together and you get something close to the American founding but still not quite there. I would advance the arguments of Thomas Jefferson articulated in his First Inaugural Address that is crucial for understanding Egypt and, more important, our own democracy.

Confused reaction to the Egyptian coup (or attempted re-refounding) reveals that it is we Americans who are Egyptians, in an older sense. It is as though we were Jews who have become assimilated to Egypt (cf. Genesis 49-50) and lost our faith and our identity in foundational American political documents. Democracy cannot be identified with elections, but neither is it reducible to a set of classical liberal values.

As Rappaport puts it, “A single election can be thought of as democracy, but few thoughtful people would defend it as such.” This was precisely the situation that America found itself in following the establishment of the Constitution, the two terms of Washington, and the term of John Adams. The 1790s brought America close to civil war over regime issues—thus Jeffersonians denounced the Federalists as “monocrats,” crushing the States, favoring Britain, and erecting a monarchy.  Hamiltonians responding in kind by accusing the Republicans of being “mobocrats,” minions of the French Revolution’s terror, atheism, and despotism.  Over American politics loomed the horrors of the French Revolution. (By far the most penetrating thoughts are found in the significantly titled work by John Zvesper, Political Philosophy and Rhetoric: A Study of the Origins of American Party Politics.)

Yet Jefferson described his election as “the revolution of 1800” (letter to Spencer Roane, Sept. 6, 1819). For it was “as real a revolution in the principles of our government as that of 1776 was in its form; not effected indeed by the sword, as that, but by the rational and peaceable instrument of reform, the suffrage of the people.” For the first time in modern history, the elected leaders of a government surrendered power merely because they were voted out of office. The election thus helped complete the words and deeds of 1776. Lincoln’s election in 1860 and his Civil War statesmanship represented another step toward a “more perfect union.” 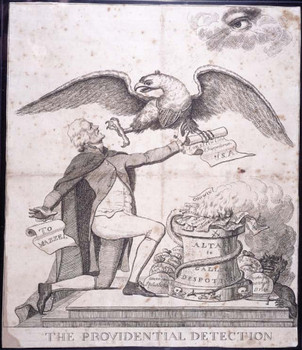 Jefferson’s “revolution of 1800” fulfilled the promise of 1776 by affirming the substitution of ballots for bullets and the equal rights of the losing party.  Jefferson made the connection between the Declaration and constitutional government clear, when he proclaimed in his First Inaugural, “every difference of opinion is not a difference of principle. We have called by different names brethren of the same principle. We are all Republicans, we are all Federalists.” He then made clear that the predominant character of the country was “republican.” This enabled the competing parties to agree that we may “with courage and confidence, pursue our own Federal and Republican principles, our attachment to union and representative government.”

But behind this aspiration lie assumptions about constitutional government that are foreign not only to Egypt but as well to our government and academic elites.

All, too, will bear in mind this sacred principle, that though the will of the majority is in all cases to prevail, that will to be rightful must be reasonable; that the minority possess their equal rights, which equal law must protect, and to violate would be oppression. Let us, then, fellow-citizens, unite with one heart and one mind. Let us restore to social intercourse that harmony and affection without which liberty and even life itself are but very dreary things.

What Jefferson says here is often misconstrued as “majority rule, minority rights”—as though these are distinct rights. The rights are identical—the ability to make public policy albeit under limited government. Moreover, the majority will that rules “to be rightful must be reasonable.” The majority speaks for the whole and the common good and does so legitimately when it is “reasonable.” And those reasonable standards are those of the natural rights of the Declaration of Independence— derived from “the laws of nature and of nature’s God,” all men are created equal and government proceeds via the consent of the governed.

Jefferson boasts that republican national government is “the strongest Government on earth,” indeed, “the world’s best hope.” Its bonds are forged by natural law and consent of the governed, and perfected for the sake of “harmony and affection.” Such confidence in strong government is possible because it is limited in its scope and especially because we have “banished from our land that religious intolerance under which mankind so long bled and suffered….”  The Declaration’s natural law would unify the seemingly at-odds missions of reason and revelation.

Indeed, George Washington’s famous letter to the Hebrew congregation at Newport makes clear that America is not satisfied with mere toleration, for being “good citizens” precedes religious opinion. That is the meaning of equality and the First Amendment. Echoing Micah 4:4, the President writes that “every one shall sit in safety under his own vine and fig tree and there shall be none to make him afraid.” Natural rights liberties have a biblical source, he implies! Neither reason nor revelation can be reduced to one another, and recognition of this basic principle opens up the realm of freedom that civilized nations foster. Whatever their differences on major political or theoretical issues, the American founders agreed on this. In describing mores as a blend of enlightenment and religion, Tocqueville supported their understanding.

Jefferson of course will not let his Federalist opponents off the hook. A party man all the way in this regard, he did all he could to wipe out the Federalist party, just as Franklin Roosevelt sought to delegitimize the Republicans. This is the background to Jefferson’s belief in

a wise and frugal Government, which shall restrain men from injuring one another, shall leave them otherwise free to regulate their own pursuits of industry and improvement, and shall not take from the mouth of labor the bread it has earned. This is the sum of good government, and this is necessary to close the circle of our felicities.

Egypt lacks political moderation and shakes with violent instability because its people have not resolved its theologico-political problem. It appears it would take a second Muslim enlightenment, with thinkers on the order of Averroes, to bring about such a condition. (See the work of Remi Brague, especially The Law of God [2008], and Robert Reilly.)

Egypt is not under our command, but we do have responsibility for our own Egyptian ways.  One of the most distinguished Supreme Court justices has made this argument, “The whole theory of democracy…is that the majority rules; that is the whole theory of it. You protect minorities only because the majority determines that there are certain minority positions that deserve protection.” Is this the “whole theory of democracy”? If so, it seems far less than Jefferson’s reasonable theory and practice. In contrasting Justice Antonin Scalia’s Stephen Douglas positivism (as well as that of Judge Bork and Chief Justice Rehnquist) with Pope John Paul II Lincolnian natural right, Harry V. Jaffa concludes that American conservatism of all persuasions denies the Declaration of Independence (link no longer available). The conservatives receive the brunt of Professor Jaffa’s scolding, because we should know better. As it is, we need to show our birth certificates to prove we’re not Egyptian illegal aliens.

The Filibuster: A (Reluctant) Madisonian Case

American Liberty and the “Pursuit of Happiness”

George Washington offers many lessons on how to understand the common good and living well together: it begins with character.

The Theory and Practice of Toleration