No doubt marketing is an exact science but I doubt that it can fully account for the choices made by people in second hand bookshops. Purchases there depend much on chance and whim; for example, I was in a bookshop in Dublin recently and I found myself irresistibly drawn to a book with a photographic plate of some children, sitting on fences in a wilderness, looking very happy, with the caption ‘Under Socialism the barefooted children ran terrible risks from venemous snakes.’

I have heard many arguments against socialism, but risks to children from venemous snakes had not hitherto been one of them. I knew I must have the book, especially as it was about the attempt by Australians at the end of the Nineteenth Century to found a socialist paradise in Paraguay. The book was Where Socialism Failed: An Actual Experiment, by Stewart Grahame, published in 1912.

Paraguay is in any case a country whose history has fascinated me ever since I first visited it more than thirty years ago and crossed its Gran Chaco with a small band of Bolivian smugglers (smuggling had long been one of Paraguay’s principal economic resources). For some reason this part of South America has always attracted political visionaries, religious refugees, cranks and fleeing war criminals. Its history is perhaps the most persistently flamboyant of any country in the world, a laboratory for political science, if only the rest of the world knew or cared.

To give only a brief outline: first the Jesuit missions and ‘reductions’ of the seventeenth and eighteenth centuries, perhaps the longest and most successful attempt at a stable political utopia in the history of the world. The question of whether they were theocratic hells or egalitarian paradises will never be definitively answered, but what is incontestable is that they were the only utopian scheme that has ever left a wonderful aesthetic legacy.

The first ruler of independent Paraguay, Dr José Gaspar Rodriguez de Francia, known as El Supremo, invented the first modern totalitarian regime in the world. He created an autarchic, egalitarian state in which the races were commanded to mix in order to avoid racial hierarchy, pride and hatred. All such regimes end in paranoia, and from the first there was a dispute as to whether he was a monster of tyranny (as per the Robertson brothers’ Letters on Paraguay) or a benevolent realist who created a happy state (as per Thomas Carlyle’s essay Dr. Francia), an argument that continues to this day.

Then came Carlos Antonio Lopez, Francia’s nephew, a corpulent but efficient dictator, who – according to the American consul, Washburn – so loved his country that he owned half of it; followed by his son, Francisco Solano Lopez, who led the country into one of the most disastrous wars in the history of the world, the War of the Triple Alliance, in which Paraguay took on Argentina, Brazil and Uruguay, which ended only when 95 per cent of the male population of the country had died or been killed. Oddly enough, Solano Lopez was treated as a national hero when I first visited Paraguay, and – even more surprisingly – he is still so regarded by some, including on the left, where he is counted a hero of anti-imperialism.

Paraguay has welcomed the Russian Mennonites, the pacifist German-speaking Anabaptist sect and, more notoriously, fleeing Nazi war criminals. Years earlier, Nietzsche’s sister, Elisabeth Foerster-Nietzsche, and her husband, founded a colony, New Germany, there, infused with an anti-semitic, romantic nationalist and anti-modern ideology. But the subject of Where Socialism Failed is New Australia, founded at the same time as New Germany, but with a communist ideology. It was founded by William Lane, a charismatic firebrand socialist preacher and journalist, who attributed all the ills of life to the capitalist system. He was also personally honest and upright, though doctrinaire and rigid, which is important: the failure of his scheme was not caused by misappropriation of funds of the Yanukovich variety. 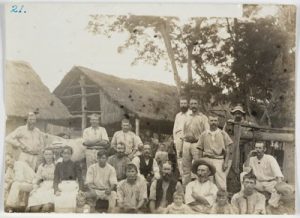 He managed to persuade the Paraguayan government, understandably anxious to repopulate the country, to grant to his utopian community 500,000 acres of good land; and soon he induced hundreds of Australians to emigrate to Paraguay. Australia was then suffering from an economic depression, but in any case Lane had persuaded the workers that they were receiving only a third of the value of their work, the other two thirds being appropriated, or misappropriated, by capitalists. Surely, if they received the entire product of their labor, as was their due, they would soon live in comfort and at their ease? Everything was to be held in common; each would labor for the benefit of all. The capital for the venture was subscribed by the emigrants themselves, who (like entrants to a religious community) gave all their wealth to it. Lane ensured that the emigrants were men of industrious character by setting a minimum subscription to the new community, which only steady workers could accumulate in savings. Some of them subscribed as much as $100,000 in today’s money, and on the clear understanding that if they left the community none of it was recoverable.

Like most such utopian schemes, this descended quickly into chaos, schism and squalor. All for one and one for all turned out to be an easy slogan to utter but not to put into practice. Men were less willing to pool the fruit of their labor than had been anticipated, and hence to work at all where they were expected and forced to do so. Defections were common and many began to see the Australia that they had left in disgust at its unjust inequalities as a promised land by comparison with New Australia. Lane felt compelled to take dictatorial powers, for example expelling those who drank (he was an ardent teetotaller himself), and not hesitating to use the Paraguayan police to enforce his decrees.

The book was published five years before the Bolshevik Revolution. To read it is to hear the voice of prophecy with regard to that experiment:

Few, even among Socialists, realise the ferocity of Socialism. Of course they are aware of the frightful episodes which occurred during the Reign of Terror in Paris – but they believe that those sanguinary occurrences were occasions by other contemporary causes, and would not necessarily recur if State Socialism were now established. The few logical Socialists of to-day fully recognise, however, that a period of absolute tyranny – during which all opponents of Socialism, and even all Socialists who fail to agree with the precise view of their brother Socialists in power, would be pitilessly sacrificed for the sake of producing uniformity of aim among its citizens – would usher in the “Coming State.”

In a small community, expulsion; in an international Socialist State, the lethal chamber, will be the fate of persistent offenders against the established conventions. And this though the executive authorities of the State may be, personally, the mildest and most human of men. The ferocity of the Socialist State will be, of course, a legalised ferocity; that is, it will be exercised nominally for the benefit of the State. The method of its working will be as emotionless and merciless as the vengeance of the worker bees upon the drones.

The author quotes Bernard Shaw, a nominally gradualist socialist, actually one of the first exponents and beneficiaries of celebrity culture:

Of course, if the nation adopted the Fabian policy [the socialism of Shaw, H G Wells, the Webbs] it would be carried out by brute force exactly as our present property system is. It would become the law; and those who resisted it would be fined, sold up, knocked on the head by policemen, thrown into prison, and in the last resort ‘executed’ just as when they break the present law.

The violence of Shaw’s diseased imagination is evident; his later admiration for Mussolini, Hitler, and Stalin hardly comes as a surprise.

The sordid drama rehearsed, on a tiny stage, at New Australia, may soon be played on a vast scale with the whole world for a theatre. When that day comes it will be a tragedy indeed!

The inside cover of the book contains the following plaintive words, written in pencil:

This is written by a man who, at the time of writing, and though a clergyman, thought that his life would last for ever, that the book would remain his for ever. This is quite harmless, of course; we all suffer the same illusion most of the time because it is a necessary condition of human life. Utopianism, however, is the search for such transcendence or forgetfulness on the political plane; nothing is more dangerous.

The Failure of a Socialist Dreamer