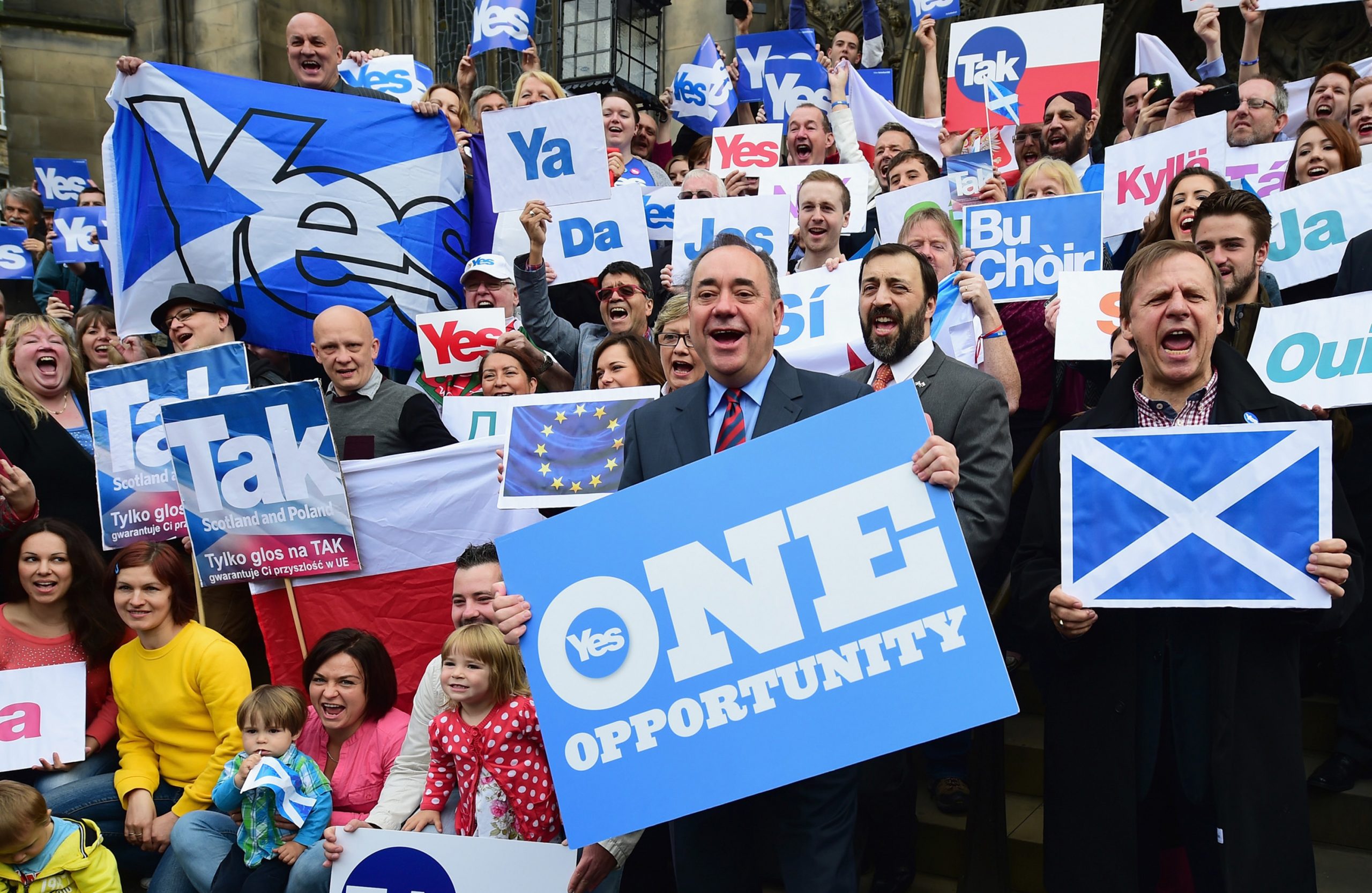 The words that Lord Falkland is supposed to have said—that when it is not necessary to change, it is necessary not to change—are a lesson that humanity and above all politicians are reluctant to learn.

There’s no profit in it for “projectors,” Edmund Burke’s term for those who place at the center of their own sense of importance change brought about by them.

And there’s no greater projector than the leader of the Scottish National Party (SNP), Alex Salmond. Mr. Salmond does not so much promise to solve specific problems as arouse hope, a hope that is vague, general, and unfocused. He has been very successful at this, assisted as he is by the fact that there is good cause for discontent in Scotland. Deindustrialization has not been kind to the country, and there are parts of Glasgow, its largest city, where living standards and life expectancy are at levels found in the old Soviet Union.

But when hope changes to expectation, as it will if Mr. Salmond wins the vote, disillusionment is likely to set in before very long. From being adulated, he may soon become reviled.

Mr. Salmond’s arguments and promises, and the hopes he inspires, are not encouraging for those who value freedom or prosperity. The present policies of the United Kingdom are far from perfect with regard to either. His proposals, which are attractive to a large part of the Scottish electorate, would be worse.

In essence, he would increase government interference in and direction of the economy. He is a dirigiste who far outflanks the Labor Party on the left. Labor, incidentally, is opposed to independence for Scotland largely because, without Scottish votes, its chances of forming a government in England would be much reduced. The Conservatives, too, are opposed. In their case, Scottish independence would give them great electoral advantage in England. But they recognize that an England without Scotland would reduce the country’s standing and importance in the world to the level, say, of Belgium.

Mr. Salmond has been able to take advantage of Scottish anger at Prime Minister David Cameron’s feeble and incompetent government, which has somehow managed to convey the impression of parsimony without the substance of parsimony. Many Scots are disgusted with the “austerity” that has resulted in the government’s having to borrow this year only one in six of the pounds it spends instead of the one in five that it had to borrow last year. Limits have been placed on the increase in government expenditure, and this, in the strange world we live in, is regarded as the same as a cut in spending—a mistake that no less an authority than Mr. Cameron once made.

Since spending power was devolved to a Scottish regional government, spending in the public sector has nearly doubled, employment in that sector has ballooned, and it now accounts for more than half of the Scottish economy. But even this is not enough for the Nationalists. Scotland, they say, is a naturally rich country that can well afford a more comprehensive welfare state than that provided already, the size of which is controlled by the hard-hearted individualist English and not by warm-hearted, collectivist Scots.

The source of Scotland’s supposed wealth, in Mr. Salmond’s view, is the oil in the North Sea. It is our oil, he tells the population, and if we had the revenue it generates we should be rich.

He is quite right that the United Kingdom has squandered the North Sea oil revenues for many years and now has nothing whatever to show for them; they might just as well not have been. But Mr. Salmond, besides overestimating the size of the revenues, forgets to mention three things.

First, the oil is rapidly diminishing, and exploration has not so far found new fields, so that it will not last many years. Second, the subventions to Scotland from England have at least equalled and probably exceeded revenues from North Sea oil. Third, the revenues have been squandered in the past precisely on the kinds of things that Mr. Salmond says they will buy more of, which is to say social security and “free” education and healthcare, all at levels that could not have been maintained without those revenues and were unearned by the rest of the economy.

It is depressing in the debates on Scottish independence to hear concepts such as “free” education and healthcare pass almost unchallenged. This happens because the SNP shares the same views on matters of political economy as its principle opponent, the Labor Party. (The Conservatives, with only one Scottish Member of Parliament, are relevant only to the extent that they are hated.) So Labor is checkmated; it can’t very well question the notion of free goods and services. That university is free to students and medicine free to those who take it does not mean they are free tout court. What they are is subsidized. That subsidies may hobble the economy in the long term, is not a case that those heard debating independence dare make out. The major players are only competing as to whose subsidies will be the most generous (with other people’s money).

In Mr. Salmond’s imagination, at least as imparted to his electorate, the oil in the North Sea plays the role of the fairy godmother who brings what everyone wishes, namely life at a higher material standard of living than that which is justified by his own efforts and economic activity. It is as if Mr. Salmond would make himself the Hugo Chavez of the North Sea. The Venezuelan, recall, managed the remarkable feat of producing fuel shortages while sitting on the largest oil reserves in the world. Lost in the debate, too, is that countries that rely entirely on oil revenue to sustain themselves (except where they are so vast in relation to the population that everyone can live as a millionaire rentier) are generally destined for a special kind of economic and social woe.

Yet Scotezuela is Mr. Salmond’s dream. And like the late Bolivarist revolutionary, he has his supporters. If the voting gives him 50 per cent plus one, he will try to eternalize his power, with a fair chance of bringing all the levers of state power under his control. But even if he falls short, his policies will continue, for Labor’s social attitudes and policies are all but indistinguishable from his. Scotland, then, will not be a one-party state but a one-policy state. No real change of direction will take place absent economic catastrophe and possibly violence.

There will not be full-blooded Soviet-style socialism. To be sure, a not inconsiderable proportion of the population would probably like it in order to punish the rich. (I have never forgotten the reception in the 1970s given to Soviet Premier Alexei Kosygin in the Scottish football stadium. The crowd chanted “Kosygin! Kosygin!”) But in practice it is much more likely that a corporatist state will emerge, with large companies, acting more or less as licensed traders, maintaining a cozy and corrupt relationship with the political class, whose standard of living the licensees will happily subsidize.

An independent Scotland brings the potential for conflict not only with England but within Scotland, the latter more serious than the former. For if economic hardship were to result, of the type that bedeviled Ireland for so long, those who voted “No” in September 2014—they are already being characterized as traitors by some Nationalists—will blame those who voted “Yes.”

Since the proportions of yea-sayers and nay-sayers appear, at this point anyway, to be very close, the recriminations will be bitter indeed.

None of this may happen, of course, even in the event of independence. Mr. Salmond is nothing if not a wily politician. He is probably capable of a swift and glib volte face with regard to economic and social policy if disaster stared him the face. (By disaster I mean, of course, a threat to his own political career and continuation in power.)

If Scottish Nationalism were an attempt to escape the successive idiocies of the British government that have had such disastrous consequences, I would be more than sympathetic to it. Alas, it is quite the reverse. It is an attempt to repeat and even magnify those idiocies. The lessons of economics and history are never learnt once and for all. To end with a slightly altered dictum of Marx: History repeats itself, but not exactly—the first time as disaster, the second time as even worse disaster.

Now for a Really Destructive Innovation: A Europe-wide State

Attempts to distance peoples completely from their national cultures were bound to produce unpredictable consequences.