Editor’s Note: This excellent post by Hans Eicholz on the need for the Scots to recover their former capitalist and free society enthusiasms if they are to govern themselves is worthy of re-consideration today.

What does it take to secure an independent, self-governing nation? Arguably it takes a self-governing citizenry. And what does that mean? Generally speaking, it means a citizenry composed of persons capable of independent thought and action—capable of sustaining themselves through much of the thick and thin of life through their own voluntary efforts in civil society.

A modern welfare state works directly against that capacity by encouraging ties of hierarchical dependence on political authorities. The modern fallacy is to believe that majority voting is sufficient to prevent the abuse of power; anyone familiar with the workings of government cannot seriously entertain that idea.

The wild increase in laws and more importantly, administrative agency rules, does not translate into the rule of law, but into the selective enforcement of special programs by those entrusted to administer them. That sort of re-feudalization of the economy and society was well understood by Mancur Olson years ago in his book, The Rise and Decline of Nations. But Olson was really only further developing the critique of mercantilism first put forward by Adam Smith.

There is another fallacy: If a nation can simply find a source of secured revenue, it can fund anything. Many today appear to think any level of social spending can be funded, so long as one can secure the income of some valuable mineral resource. Spain thought it saw such a pot of gold in the New World. Did that help the Spanish? More recently, Venezuela looked to oil. That’s a particularly interesting case with respect to individual self-government.

In order to capture oil revenues, what did the once-popularly elected Hugo Chavez have to do? He eliminated private property in its ownership. Was that ultimately good for self-government, either politically or individually? Quite the contrary. The poor have grown ever more dependent on government handouts, and while protests against Chavez’s successor now rage, it is very clear that the country is hopelessly divided—perhaps violently so. This can’t be good for any conception of what it means to be self-governing. 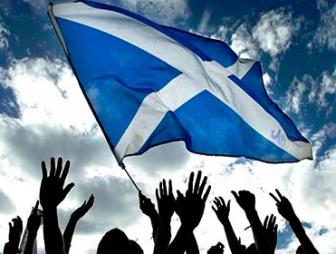 That brings us to the Scottish question. Many in Scotland appear to be favoring independence from the United Kingdom and are placing their hopes in the twin promises of democratic institutions and oil. And yet, these same individuals are by and large also in favor of continuing high levels of social spending. Indeed, one of the major complaints is that England has become fiscally too tight (link no longer available)—too conservative. One needs to ask, is this a recipe for success?

Over a year ago, Douglass Fraser posed the pointed question, whose oil is it? By this he was not questioning Scottish claims to political sovereignty, but simply pointing out that in the West, we recognize private ownership in these resources. To place the hopes of social spending on capturing oil revenues, is to very directly ask how far down the path of Venezuela do the Scots want to go? How far do they want to travel the path of nationalizing and socializing the means of production?

In writing this, people should know that I am a friend of decentralization, a believer in federalism, and usually very much inclined to favoring local control even up to the point of secession in many instances. If Scotland is going to do this, however, it will have to do so for the right reasons and not from misguided ideology. And here is where the real irony and potential tragedy of the current vote rests.

The country that did so much to inspire the world with an understanding of self-government appears to have forgotten its own heritage. Who understood self-governing institutions, whether in commerce or society, better than David Hume and Adam Smith? Who was it that inspired Jefferson and gave particular poignancy to the idea of the “pursuit of happiness” but Henry Home, Lord Kames? And who was it that wrote so profoundly of civil society, but Adam Ferguson? The Scottish Enlightenment was the source of so much of what we understand by the meaning of liberty, free enterprise, and civil association, limited government, and the rule of law.

All those who favor Scottish independence will have to regard more than political self-government if self-government is to succeed in anything but name. They will need to consider the full meaning of the term as it extends down to the roots of the individual person, an idea that they once taught all the rest of us.

Whatever choice they make, I wish them well.

Trade, Nations, and War in an Enlightened Age

Between 1776 and 1815, Britain was at peace for just 10 years, and reading the Scottish defense of free trade without this in mind is a mistake.

For Smith, commerce is not about consenting to contracts but individuals surfing waters highly charged with solemnities of ritual, trust, and reverence.

Of Nobility and Modernity: The Thought of Aurel Kolnai

Populism is shot through with the search for nobility, whether in farm animals, vegetables, cakes, sneakers, hubs and engines, or human talents.