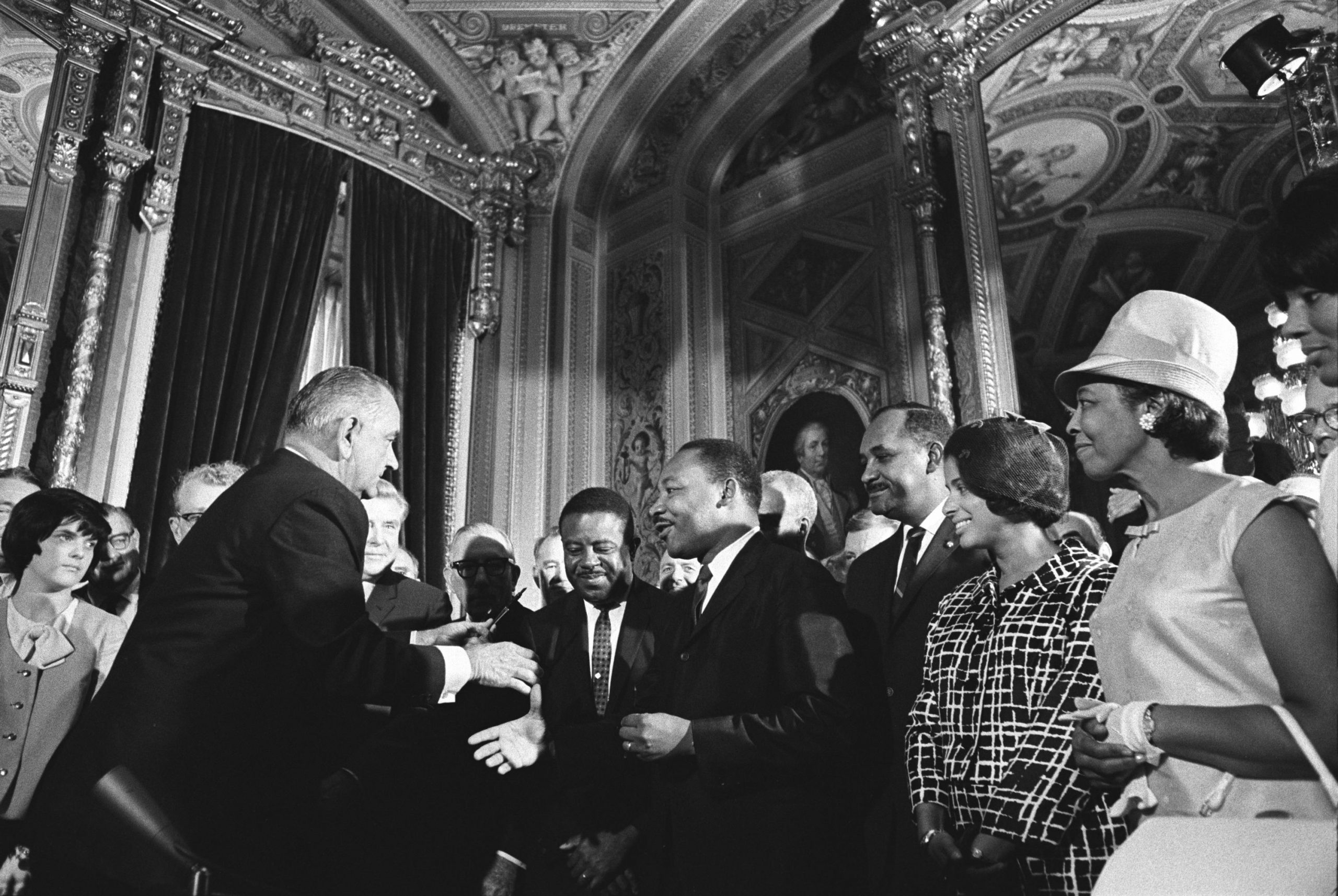 The celebrations of the Selma voting rights march 50 years ago noted how unthinkable it was that a Black President would be addressing them. Actually, it may have been no less unthinkable that a White Southern President seized the moment, a half century ago, to deliver the most stirring civil rights speech ever delivered to Congress.

Not that a future Black President was far from the imagination of visionaries: “Our first black President was a man of such distinguished talents, that none chose to risk their own reputation for discernment by not acknowledging it.” A sample of contemporary media fawning, perhaps? Actually it’s from an anonymous short story that was published on April 2, 1831 in William Lloyd Garrison’s newspaper, The Liberator.

The civil rights issue, whether in its antislavery form or its Reconstruction or 1960s constitutional and legal forms, always stirred the imagination as it drove us back to our origins and potential as a nation. As the Johnson and Obama speeches on Selma reveal, that Founding source remains inspiring and transcendent. They also show the two orators letting contemporary concerns enter in, and the effect is of inspiration punctured, a moment spoiled.

While one might think it laughable to compare Lyndon Johnson as an orator to Barack Obama, the former’s Voting Rights Act speech of March 15, 1965 was a gravelly voice of gravity that calls forth the best of the American political tradition. Frederick Douglass, for example, is not quoted directly but one can hear distinct echoes of him as Johnson points out that civil rights pertain not to mere interest groups but to American identity. Said Johnson:

He recognized the purpose of America as expressed in its “great phrases”—all men are created equal; government by consent of the governed; give me liberty or give me death. For most of the soaring speech, Johnson presented a view of America that comes from the Founders, Abraham Lincoln, and Frederick Douglass.

But: halfway into it, the ambitions change. Johnson loses the focus on voting rights—that is, the ability to govern oneself—when he declares:

There is really no part of America where the promise of equality has been fully kept. . . . How many white children have gone uneducated, how many white families have lived in stark poverty, how many white lives have been scarred by fear, because we have wasted our energy and our substance to maintain the barriers of hatred and terror?

In a later speech, at Howard University, Johnson would posit that:

It becomes clear that Johnson views the civil rights laws, in particular voting rights, as opening “the city of hope” to all. We can pass laws to alleviate human suffering! Follow his “Great Society” utopian aims: Johnson would be the President who educated the young, relieved poverty, and helped end hatred and war. Instead he became the President who expanded government and its budgets, and then fought a war so ineptly such that his administration exhausted the national economy and demoralized the country.

Rioting and uncertainty at home and futile war abroad seemed to be Johnson’s legacy. His definition of progress reproduces the stages of Progressivism—an implicit attack on individual liberty, the need for bureaucracy, and a redefinition of freedom, making it a good conferred by society, not a quality inherent in a human being. The imposing arm-twister seemed the farthest thing from what Henry Adams wrote to a previous Chief Executive, Theodore Roosevelt, in 1908:

Whatever the President says goes! The authorities used to say that Parliament had the power to do everything except make a man of a woman. Some day we will put that into the Constitution as an Executive Power—not requiring confirmation by the Senate.

After LBJ and King, President Obama went on to exploit the fulfillment of that grand vision. Lyndon Johnson spoke from the heart of America but then stepped on his lines by saying too much. Obama, following his elders and others of his generation, contorted the civil rights argument into a caricature of itself, confusing rights with passions and compromising the movement’s moral grandeur.

Courage and self-sacrifice became narcissism. The Moynihan Report anticipated general cultural collapse. The right to vote became the requirement for Department of Justice preclearance of the boundaries of all government units in Alaska. The mighty King became a grotesque hunk of stone on the Mall. The Dream became the rallying cry of Ferguson. The spiritedness and patriotism of the civil rights movement became an exhausted, exhausting spirit of complaint.

Obama wants to unite his audience at the Selma bridge and beyond, with his campaign slogan “the fierce urgency of now” and “yes, we can” making appearances. The effect falls flat:

We’re the firefighters who rushed into those buildings on 9/11, the volunteers who signed up to fight in Afghanistan and Iraq. We’re the gay Americans whose blood ran in the streets of San Francisco and New York, just as blood ran down this bridge.

We are reminded of Obama’s earlier appropriation of the bridge—his claim that his parents married because of the Selma march, when in fact he had been born three-and-a-half years before. Johnson, by comparison, simply reviewed his experience teaching poor Mexican Americans in rural Texas. This encapsulates the difference between liberal and postmodern civil rights.

But, it could be argued, if “America is a constant work in progress,” why can’t one take liberties with the past? After all,

the American instinct . . . requires more than singing its praises or avoiding uncomfortable truths. It requires the occasional disruption, the willingness to speak out for what is right, to shake up the status quo. That’s America.

Winding up the speech, Obama returns to the Founding, with his best lines—

For we were born of change. We broke the old aristocracies, declaring ourselves entitled not by bloodline, but endowed by our Creator with certain inalienable rights. We secure our rights and responsibilities through a system of self-government, of and by and for the people. That’s why we argue and fight with so much passion and conviction—because we know our efforts matter. We know America is what we make of it.

—and then he steps on them to take a cheap partisan shot. Those who oppose the extension of the Voting Rights Act he accuses of “voter suppression.” Yet he is the one who would diminish the power of 535 elected members of Congress through his willful expansion of the bureaucracy. Somehow the gay Asian in a wheelchair rolling down the sidewalk doesn’t seem to speak to Ferguson, Missouri.

The Department of Justice’s report on the Ferguson police department should be understood primarily as a report on and indictment of local despotic practices. Anyone concerned with the evils of bureaucracy in America should read it with that concern foremost in mind.

As has been widely noted, the DoJ staff resorted to misleading “disparate impact” analysis to reach many of its unfounded conclusions about discriminatory police conduct. But what is shocking, unacceptable, and indefensible is the police department’s insistence on humiliating, arresting, and fining citizens.

No middle-class community would tolerate police behavior like this—typically, Americans get angry over ticket quotas of any kind. Ferguson has a runaway bureaucracy that has forgotten its primary mission. Its bureaucracy is not the soft despotism of a DMV, either, but one savage and armed. (One sees the same attitude in fire departments around the country as well.) No one should respect armed tax collectors. But, as we tell our children, everyone should respect the police and other public safety officials who can be expected to do their work professionally.

Bottom line: The local government that Progressivism ran roughshod over has come back to tyrannize over the local citizenry.

The civil rights era, a transcendent moment in our history, began with the ideals of our Founding but became lost in bureaucracy—the bureaucracy of education, welfare, and law enforcement. Americans rightly wonder: why should we vote, if the bureaucracy holds the power? If bureaucracies hold the power, what can citizens do to control them? Whether it is the CIA, the EPA, the State Department, or the Department of Justice, they must be controlled by the sense that every American owns himself.

Why Thayer is Clearly Mistaken about Judicial Restraint

A Nondelegation Doctrine the Court Can Believe In

Mashaw on the Administrative State