It was March 27, 1809, three weeks into his presidency, and James Madison stood astride the world when he posted a letter to his predecessor Thomas Jefferson to inquire as to one particular secret of the office: “I forget whether the time piece in the sitting room [needs to be wound] monthly or weekly?”

That was then.  This being now, as recently as 1996 the White House employed a presidential attendant several days a week whose actual job—no, really—was winding clocks.  The late Senator Daniel Patrick Moynihan suggested that even Woodrow Wilson, champion of presidential government, might not recognize the office today:

A president who wrote and typed his own speeches is now at some removes succeeded by presidents who do not know the names of most of their speechwriters, much less of their lawyers, economists, statisticians, strategists, and yes, as of 1989 the White House demographer.  First the president got staff, then the staff got staff. (On the Law of Nations, 107) 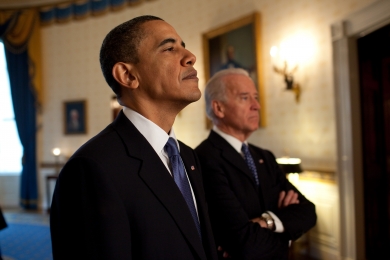 The distinction between the original and contemporary presidencies is worth recalling as the Capitol reels—as it ought to—from the scandals, IRS and otherwise, swirling around the White House, which ought to be presumed until shown otherwise to be the product of an obsession with retaining power.  The malefactors ought to be outted, investigated, castigated.  This is serious stuff.

But when that is done, it is also time to reflect on the culture of obsessive power that produced the abuses.  These scandals are symptoms—which is decidedly not to say those who manifest them are not to be held to account, only that we ought also to recognize the disease to which their behavior has contributed—of the malady that might be diagnosed as “constitutional presidentitis”: the inflation beyond all reason of the president’s power within the constitutional order.

I have argued here before that it is inherently unhealthy for a republican regime for so much to be at stake in elections.  It leaves losers unable to reconcile themselves to results.  It encourages wild swings in policy as well.  But we are seeing in the burgeoning scandals surrounding the presidency that it encourages misbehavior too.

Bertrand de Jouvenel would be unsurprised by the fact that players cheat when the stakes swell.  He predicted as much in The Pure Theory of Politics.  Everyone, he notes, regards it as immoral to gamble the sustenance of one’s family in a card game.

Now imagine a player so foolish and sinful as to wager the liberty of his children, to be slaves if he loses. Should we be astonished to find this madman cheating to win, and upturning the table if he seems to be losing?  Such disregard of rules must naturally follow from inordinate stakes.  We therefore conclude that to keep the game of Politics within the rules, the stakes must be kept moderate. (Pure Theory of Politics, 246, emphasis mine)

Jouvenel thus points the way toward a solution for abuses of power, which is the diffusion of power.  Consider: One would less expect this level of abuse of public authority for the purpose of keeping a House seat for the simple reason that less power is at stake.  This is not a case for “dividing” the presidency as, for example, Edmund Randolph advocated doing at Philadelphia.  That would make the office unaccountable and unmanageable.  It is a case for lodging less power in hands that must, of necessity, remain united.

To be sure, the presidency is and is going to remain a powerful office.  But it does not have to be so obsessively so.  Diminishing its power would also diminish the obsession with retaining it.  Doing so would not substitute for personal morality, just as the temptations of power do not excuse abuses of it.  But any opportunity to reflect on our unhealthy obsession with the presidency is worth taking.  This is one.

An Irish Tale of Austerity

In Praise of Gridlock, Federalism’s BFF