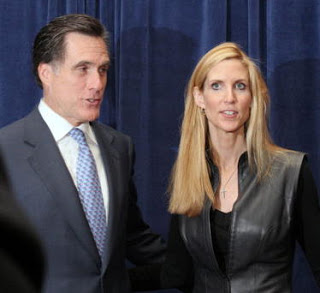 One of the interesting aspects of the Republican primary season this year is that one of Mitt Romney’s biggest defenders is Ann Coulter.  Coulter is considered by many to be a “far right, social conservative, Republican.”  And Romney, of course, is deemed by many such conservatives to be the person who they least desire to be the nominee — anyone but Romney seems to be the refrain.   Yet, Coulter has marshalled all of her considerable rhetorical resources to defend Romney.

Coulter appears to have two main reasons for preferring Romney.  She believes he is the only candidate who can beat Obama, and she thinks Romney is the most conservative of the candidates, at least on the issues that matter to her.

Finally, Coulter is even willing to defend Romneycare as the conservative alternative to socialized medicine.  Coulter writes:

Until Obamacare, mandatory private health insurance was considered the free-market alternative to the Democrats’ piecemeal socialization of the entire medical industry.   In November 2004, for example, libertarian Ronald Bailey praised mandated private health insurance in Reason magazine, saying that it “could preserve and extend the advantages of a free market with a minimal amount of coercion.”   A leading conservative think tank, The Heritage Foundation, helped design Romneycare, and its health care analyst, Bob Moffit, flew to Boston for the bill signing.  Romneycare was also supported by Regina Herzlinger, Harvard Business School professor and health policy analyst for the conservative Manhattan Institute. Herzlinger praised Romneycare for making consumers, not business or government, the primary purchasers of health care.

“Do You Realize Our Candidate Is Mental?”

A Handout, Never a Hand Up