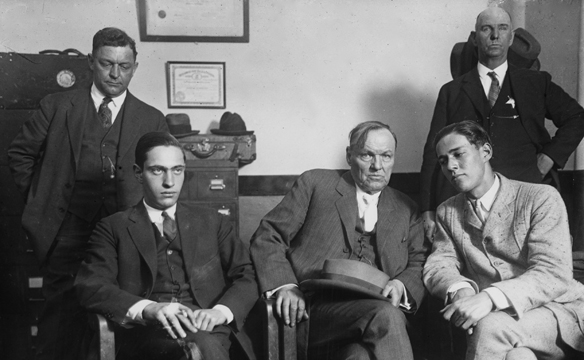 The reputation of Clarence Darrow (1857-1938) as one of the greatest of American lawyers rests largely on two courtroom performances: in the murder trial of Leopold and Loeb in Chicago in 1924, and the “Scopes Monkey Trial,” which took place in Dayton, Tennessee in 1925. Both were extensively covered by the news media and later became the subject of numerous plays, books, and movies. Darrow’s 12-hour-long closing argument at the sentencing hearing in the case (the teenaged “thrill killers” had confessed, and Darrow convinced them to plead guilty for tactical reasons), which persuaded the trial judge to spare the defendants’ lives, is regarded as a classic of courtroom oratory. The bizarre case was fictionalized in the 1956 book and 1959 film Compulsion, and inspired aspects of the play and Alfred Hitchcock’s 1948 movie Rope (and, some believe, the ransom delivery sequence in 1971’s Dirty Harry).

The Scopes Trial, in which Darrow faced off against the famed Christian populist William Jennings Bryan on the teaching of evolution in the schools, had little legal significance but has been deemed a turning point in American culture, with myriad (and only loosely accurate) depictions (such as Jerome Lawrence and Robert Edwin Lee’s 1955 Inherit the Wind) on stage, screen, and television. Ted McAllister has written insightfully for Law and Liberty about the cultural and political conflicts the trial embodied. It still embodies them—the figure of Darrow sparks conservative opposition in Dayton to this day. Plans for a statue of Darrow to join the statue of Bryan that has, for the last decade, marked the site of the trial are being protested by several grassroots organizations.

Darrow’s reputation as “the Great Defender” has undoubtedly been burnished by the fact that he was a man of the Left—an early supporter of the American Civil Liberties Union, an opponent of capital punishment, a lifelong advocate for organized labor, and an agnostic (in an era when such views were quite controversial).

Hagiographers present this icon’s words and deeds selectively, focusing on the highlights and overlooking the unseemly parts. If you are curious about what, exactly, has been air-brushed out of the career of Clarence Darrow, it is that he was corrupt: a jury tamperer.

In 1911, the American Federation of Labor hired Darrow to defend John and James McNamara, officials of the Iron Workers Union who were charged with capital murder in connection with the bombing of the Los Angeles Times building during a bitter labor dispute in October of the previous year. The blast killed 21 employees and injured more than 100 others. Today, such an attack would be considered an act of domestic terrorism. Labor leaders contended that the explosion and fire were caused by a natural gas leak, and the Socialist leader Eugene V. Debs went so far as to accuse the anti-union publisher of the Times, Harrison Gray Otis, of planting the bomb himself to “frame” the Iron Workers. The evidence, however, pointed overwhelmingly to the defendants’ guilt. (One of the brothers had dynamite, blasting caps, and timing devices in his possession when arrested.)

Darrow, as the go-to lawyer for organized labor, was under tremendous pressure to get the McNamara brothers off. The case was a national sensation. The entire union movement espoused the brothers’ innocence, and raised a considerable amount of money from union members to finance the defense. Darrow had insisted on, and received, a large retainer. As the lengthy trial proceeded, however, he became increasingly convinced that his clients would be convicted, and—in a controversial move—convinced them to plead guilty in exchange for prison sentences, escaping the gallows.

Before the plea bargain was finalized, Darrow was accused of attempting to bribe two trial jurors (Robert Bain and George Lockwood) to vote not guilty, for the sum of $4,000 apiece—a fortune in 1911. Darrow was physically present when a member of the defense team delivered the bribe to Lockwood. Needless to say, jury tampering is a serious charge, and even after the McNamara brothers admitted their guilt and were sentenced to prison, Darrow was indicted for two counts of bribery, for which he stood trial seriatim in Los Angeles in 1912 and 1913. Geoffrey Cowan, in the 1993 bestseller The People v. Clarence Darrow: The Bribery Trial of America’s Greatest Lawyer, offered an account of these events that Alan Dershowitz described as “eye-popping and icon-shattering.”

Cowan, who began the project an ardent admirer of Darrow’s, concluded that he did direct the jury tampering, even though he was acquitted of one of the charges. This was in the 1912 trial, which saw Darrow taking over from his erratic attorney, Earl Rogers, to mount his own defense.  The second trial hung 8 to 4 in favor of conviction, but the prosecution decided not to pursue a retrial.

Based on his research, Cowan wrote, “it is fair to conclude that Darrow bribed both Lockwood and Bain,” which was also the widely held opinion of even sympathetic reporters at the time. Even Darrow’s friends believed him guilty, as did his counsel Rogers. “All of the evidence gleaned from dozens of personal memoirs, private papers, and government files,” said Cowan, “adds further reason to believe Darrow guilty.”

Some in his “circle of friends” even “believed he had bribed juries before,” Cowan reported. For example, Darrow’s successful defense in 1907 of William “Big Bill” Haywood (leader of the Western Federation of Miners), charged with the bombing death of the former Governor of Idaho in another high-profile labor dispute—the subject of J. Anthony Lukas’s magisterial account Big Trouble (1997)—was marred by reports of jury tampering. According to the daughter of Earl Rogers, Darrow admitted his guilt to her father in the McNamara brothers bribery case.

None of this is to suggest that Darrow was not a skilled courtroom advocate. He was. But history—if it is fair—considers a person’s misdeeds as well as his accomplishments. Bribing jurors is a despicable breach of legal ethics. Tampering with juries is an affront to the rule of law. Like politicians who steal elections and athletes who throw contests, lawyers who bribe jurors undermine the integrity of the entire enterprise—and thus betray the public trust.

If the citizens of Dayton, Tennessee object to a statue honoring Clarence Darrow, they should do so because he was an unscrupulous cheater who resorted to illegal tactics in pursuit of courtroom victory. He deserves scorn, not commemoration.

The Stark Truth About Trump

Inheriting the Wind, or Reaping the Whirlwind?

Almost all of the “conventional wisdom” concerning the Scopes trial is false and was manufactured to meet the needs of the new provincialism.

The Scopes Trial and the Problem of Democratic Control