This post is a book notice with a twist. 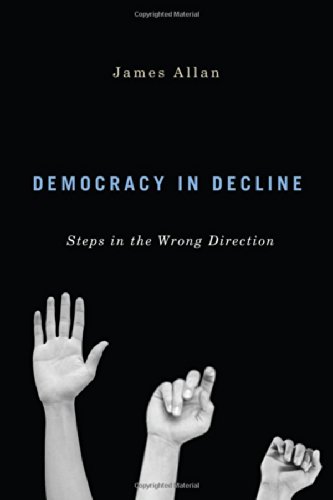 The book is Democracy in Decline: Steps in the Wrong Direction (2014), by James Allan. Professor Allan (can I call him Jim?) is a law professor at the University of Queensland, and his book argues in compelling, commonsensical terms that, as the title suggests, democracy is being quietly but steadily shunted aside, not in marginally democratic countries but in the United States, Canada, England, Australia, and New Zealand. “[M]ost of the blame for that declining trend,” Jim argues,

can be laid at the feet of our top judges . . .; at the feet of the expanding reach and purview of international law . . .; at the feet of jurisdiction gobbling supranational organizations; at the feet of various elite groups in society (including lawyers’ bodies, top public servants, academics, those in NGOs, the mainstream media, and of course the top judges) who not only wink at this trend but who actively promote it, preferring where possible to ignore, disdain and override the beliefs, values and wishes of the majority of their fellow citizens . . ..

Sounds pretty plausible to me.

The twist has to do with the back cover. My copy, which Jim was kind enough to give me, and which was published in Australia by Connor Court Publishing, has a blurb from Mark Steyn, which says among other things: “This is an important book that charts free nations’ beguiling seduction into soft tyranny.” Evidently, though, the version published in Canada, the UK, and the US, by McGill-Queen’s University Press, has removed the Steyn blurb. (See here and here.) Jim is unhappy about this. I would be too; I’d be delighted if one of my books generated praise from Mark Steyn. But who knows? Maybe the publisher is doing what it can to promote the book by providing a bit of supporting evidence for the book’s thesis and for Steyn’s comment?

The Politics of Moral Outrage

American Constitutionalism for a Country Without Americans

Will America follow other presidential regimes down the road to one-man rule, or will it return to the imagined country of the past?