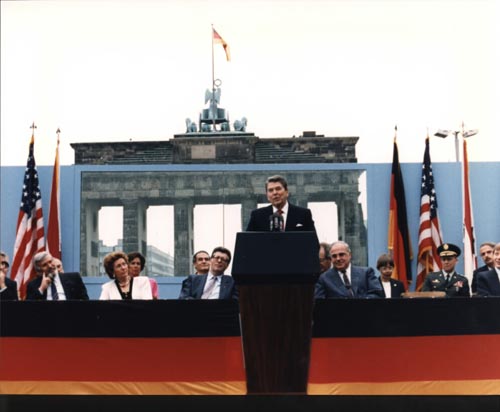 Here’s my story: I’m sick of narratives. My story, vision, dream—whatever—speaks against the so-called “grand narratives” that populate our rhetorical landscape like so many garden gnomes or pink flamingos. It’s not just that they’re awkward and unpleasant. They distract us from what should be the focus of our attention: the facts. Appealing to a narrative makes the speaker sound lofty in his ideals; it makes a politician’s policy decisions seem inevitable—but that’s just not the case. Call me a narrative skeptic.

At the same time, we can’t ditch all narratives. Some stories are genuinely profound and appropriately shape the national character. So I’m not saying that there’s ever been a political golden age without narrative, and I’m not saying that there aren’t times when a story is just the right thing to offer. But if we want to achieve any kind of golden mean in our communication, we ought lean harder on principles, and less on stories, given the zeitgeist.

Well, then, what’s the difference between genuine narratives and fake ones? I’m glad you asked. Here’s the answer: we should ask ourselves whether or not the narratives we use have implicit propositions that are at least plausible. All narratives offer a story, but they also have a framework behind the story that makes claims about how things are, how things ought to be, or both. If they lack a framework, then the story offers no real insight into political life; it’s just empty rhetoric.

Let’s consider a few concrete examples. In 1987, Ronald Reagan stood at the Brandenburg Gate in West Berlin and told a story about life on both sides of the Berlin Wall:

In the 1950s, Khrushchev predicted: “We will bury you.” But in the West today, we see a free world that has achieved a level of prosperity and well-being unprecedented in all human history. In the Communist world, we see failure, technological backwardness, declining standards of health, even want of the most basic kind—too little food. Even today, the Soviet Union still cannot feed itself.

But Reagan didn’t stop with the narrative. He immediately offered an interpretation of the historical events:

After these four decades, then, there stands before the entire world one great and inescapable conclusion: Freedom leads to prosperity. Freedom replaces the ancient hatreds among the nations with comity and peace. Freedom is the victor.

Reagan’s most famous exclamation from the speech—“Mr. Gorbachev, tear down this wall!”—came within the context of two Berlins, one flourishing and the other decrepit, and Reagan’s clearly articulated belief that freedom leads to prosperity. Reagan moves up the ladder of abstraction, from the two Berlins to a single economic and political principle: freedom leads to prosperity. And he does more than that. Freedom, Reagan says, can lessen the animosity between rival nations, and rival peoples.

In his last address as president, Reagan made the distinction we’re trying to make here, between the stories and the substance of political speech:

And in all of that time I won a nickname, “The Great Communicator.” But I never thought it was my style or the words I used that made a difference: it was the content. I wasn’t a great communicator, but I communicated great things, and they didn’t spring full bloom from my brow, they came from the heart of a great nation—from our experience, our wisdom, and our belief in the principles that have guided us for two centuries.

Consider an alternative Republican speech: Richard Nixon’s so-called “Checker’s speech.” When confronted with allegations surrounding his reimbursement from a fund established by his political backers, Nixon flatly denies any wrongdoing at all, arguing that the fund, far from being a threat to integrity, preserved it. He didn’t think it appropriate for the taxpayers to pay for his political expenses, and he thought that practicing law was both impracticable (given that he would have to do so long distance, California) and unwise (given that it could entangle him in the affairs of others, making him susceptible to corruption).

But that’s not what’s remembered in the speech at all. The speech isn’t called Checkers for no reason. In the speech, Nixon offered his recollections of work in the family grocery store; his current automobile (a 1950 Oldsmobile), and—of course—“a little cocker spaniel dog in a crate” sent to “the two youngsters” from “a man down in Texas.” Because the dog was black and white, one of Nixon’s children named him “Checkers,” and, Nixon said, “I just want to say this, right now, that regardless of what they say about it, we’re gonna keep it.”

“Too much attention can be paid,” Hal Bochin writes in Richard Nixon: Rhetorical Strategist, “to whether Nixon’s argument stands up to logical tests or not.” That’s comparatively inconsequential, because something else did the work: “In large part Nixon succeeded because of his successful use of narrative.” Exactly.

Regardless, Nixon thought the speech a success: he celebrated its anniversary yearly, even after Watergate. And, to be fair to Nixon, he did address the political charge of wrongdoing directly. What won the day, though, was the dog.

So why do we turn to grand narratives instead of ideas? First, stories are compelling; they sweep us off our feet. We may forget the principles, but we won’t forget the principals—that is, the protagonists in the political narratives. If we vote with our hearts, then stories about a politician’s upbringing or his candid remarks about his family—and, yes, even thoughts about his dog—make us more amendable to pulling the lever (or punching the chad, touching the screen, etc.) for that candidate. This political challenge is not new, but narratives in a television age allow rhetoric to obscure the facts. (After all, Neil Postman’s Amusing Ourselves to Death made its appearance in 1985, not 1885.)

Narratives have another appeal from a politician’s perspective: they are politically untouchable and help a politician avoid accountability. Neville Chamberlain, to his credit, didn’t warble on about his school days at Rugby, or about the German food he had while abroad. Instead, he read a short statement and said the following, on September 30, 1938:

My good friends, for the second time in our history, a British Prime Minister has returned from Germany bringing peace with honor. I believe it is “peace for our time.” Go home and get a nice quiet sleep.

And, presumably, the people did—but not for long. “Peace for our time”—Chamberlain’s self-conscious echo of Benjamin Disraeli from the century before—proved to be, regrettably, all too short lived. But that’s not the point: Chamberlain was wrong, but he was clear enough in his statement for us to know that he was just that—wrong. Given that avoiding accountability serves as a professional sport amongst politicians, it’s no wonder that many prefer the stories without principals than the stories with them.

What Do We Hold in Common?

Still Amusing Ourselves to Death