Who wins and loses in Syria’s civil war is not in our interest and is beyond our control. Because that has been obvious since that war started two years ago, the American people’s consensus has been that the US government should steer clear of it. Now the Obama Administration seems to have decided to help the rebels, conveying its decision to the public indirectly and framing it in generalities: ending the slaughter and asserting America’s role in the region. But since its intervention cannot decide the struggle, it can only diminish America’s influence.

The foolishness of this involvement serves to remind us of what should be the criteria for involving ourselves in foreign situations. 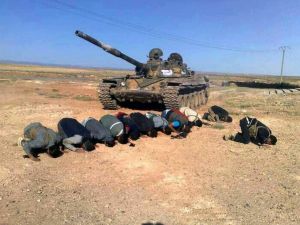 A group of Syrian rebels at prayer.

Speculating on whether Syria’s Assad regime is more or less vicious, more or less an enemy of America than its opponents; whether it is better to help or hurt one side rather than the other, is less useful than asking what good any of that might do for America’s interests.  In fact the only sure thing about the Obama Administration’s plans is that they portend no good for us Americans.

The least reason for this is that each of that war’s several sides has its own agenda, its own reasons for fighting, all of which are antagonistic to us and to our interests. In short, the Obama Administration is bringing water to others’ mills. Nor is there any way of forcing, never mind persuading, the several parties to change what they are about. This would not be possible even were Americans to descend on that country in overwhelming force. Recall that a decade of American occupation and some two trillion dollars did not affect the character of the parties that continue to fight each other in Iraq. Much less is there reason to believe that help to the Syrian rebels might make them any less our enemies.

First, Syria is the main current battlefield in a worldwide, centuries-long struggle between Islam’s sects – Sunni (1.7billion) and Shia (100 million.) The Syrian battlefield is drawing fighters and funds from both sides’ resources around the world, much as the Spanish Civil War of 1936-39 drew from Fascist and Communist sympathizers on four continents. By helping the Syrian rebels, the Obama Administration is enlisting the American people in a sectarian controversy the terms of which are as bizarre as they are irrelevant to us. When, as is inevitable, some of the supporters of the side that suffers casualties as a result of America’s intervention decide to kill Americans in retaliation, what comfort can the victims take in the cause of Sunni Islam that our country has now made its own?

Second, the Syrian civil war is a struggle by Iran (and its ally Russia) for influence in the Mediterranean. Their main adversaries happen to be Sunni Arabs under the leadership of Saudi Arabia and the Gulf sheikdoms (principally Qatar). It is not in the United States’ interest that the Mediterranean be dominated by either. Rather, our interest is in preserving the only solid outpost of Western civilization there, namely Israel, and reinforcing Lebanon, now precarious. In this regard, the Syrian civil war offers America some opportunities – opportunities that can be pursued by means very different from intervention on behalf of the rebels.

In short, the principal obstacle to Lebanon’s existence as a civilized place dominated neither by Sunni nor by Shia, a country that does not threaten Israel nor will ally with America’s enemies, is Hizbullah – the armed terrorist group that is also the most powerful of Lebanon’s factions. But Hizbullah’s bosses in Iran have enlisted that group wholesale as foot soldiers in Syria’s civil war. As Lebanese Hizbullah die in frontal combat there, the groups’s back in Lebanon is exposed. American foreign policy officials worthy of their jobs would be grasping opportunities to stick a deadly knife into that back. Suffice it to note that America’s heretofore flaccid acceptance of Hizbullah had led some of Lebanon’s most powerful Christian factions to enter into an alliance with it. If now America were to focus on undoing Hizbullah – something that is doable – rather than on amorphous help to Syria’s rebels, any number of Lebanese would rally to reclaim their country. In sum the freedom of Lebanon is in our interest, and is achievable.

The Syrian civil war also threatens Russia’s foothold in the Mediterranean. We are helping the rebels under the false assumption that Russia is somehow interested in ending the violence. But it is not. The Russians’ objective is to keep their naval base in Syria. For this they are willing to make any deal with anyone. Our interest is to prevent any such deal between Russia and anyone in the region. Nothing is quite so fatal to a country’s foreign policy like basing it on patently false assumptions and in the willful ignorance of one’s own interests.

Sect and Power in Syria and Iraq

What Does It Mean To ‘Punish’ Syria?