Recent events in Turkey ought remind us, if we needed reminding, that freedom and parliamentary democracy are not identical, though many people mistake the one for the other. But if by parliamentary democracy we mean merely government legitimated by a majority of the votes every few years, there is no reason why such democracy should not lead to tyranny. Indeed, a democratic tyranny may be among the most insidious, if not necessarily the worst, of tyrannies, for it possesses the simulacrum of a justification for its oppression, namely the will of the majority. 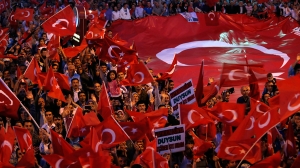 A counter protest in support of Prime Minister Erdogan. euronews.com

No one can doubt the democratic legitimacy of Mr Erdogan, the Turkish Prime Minister. He has won three genuine elections with many more votes than any other candidate (in this respect, his legitimacy is actually far greater than that of most western leaders). And it is probable that if there were elections tomorrow he would win them without difficulty. Moreover, the reasons for this are not difficult to find. Turkey under his government has thrived; and even his worst enemies could not but admit that the country is far better administered under his rule than it was before he came to power. No doubt some of Turkey’s prosperity is attributable to its good fortune in not being permitted to join the European Union; but there is more to success than the avoidance of catastrophic mistakes. Failing to chain yourself to a corpse does not make you an athlete.

Mr Erdogan has also tamed the army, which has more than once intervened to overthrow a democratically-elected government. Ordinarily, this would seem a step in the right direction; but the army was the ultimate guarantor of Kemalist secularism and it may well prove its emasculation was equivocal from the point of view of individual freedom.

The Prime Minister has not hesitated to characterize the demonstrators in Istanbul and elsewhere in a most disparaging, disdainful and insulting way; and surely we know enough about the outcomes of mass demonstrations in several parts of the world not to make the opposite mistake, of considering the participants to be the parfit gentle knights of freedom, especially the freedom of others.

Nevertheless, it is not difficult to see – indeed, it is difficult not to see – the conflict between Mr Erdogan and the demonstrators as that between two quite different conceptions of society, the first religious and the second secular. No one knows quite how far Mr Erdogan wants to go with his Islamism: whether he is a wolf in sheep’s clothing, or rather (as the demonstrators fear) a fanatic with a moderate face, or a true pluralist. It is even possible he does not know himself, that he has no blueprint that he is following, and that, like most politicians, he makes things up as he goes along in an attempt to hang on to power. But the auguries are not good.

At first he might have posed as a man merely trying to redress the balance after years of Kemalist repression of the popular religious sentiment of the Turkish people. But now that the muezzins call people to prayer at a volume and length unprecedented in recent Turkish history, and a considerable proportion of the women dress in a supremely unattractive and inelegant way (a shapeless gabardine coat the color of a sea-fog), it is difficult to believe that further Islamization is a mere redressment of the balance between official policy and popular sentiment.

It is more likely that Mr Erdogan sees parliamentary democracy as the tool by which the will of the majority (incarnated, naturally enough, by himself) is imposed upon the minority. And since in Turkey the majority is clearly Islamic, Islamic mores should prevail. Just as for the communist the New Economic Policy or the Popular Front were regrettable, temporary but necessary stages before the advent of true communism, so for Mr Erdogan living and let live has been a regrettable, temporary but necessary stage before people come to live as they ought: ought, that is, as defined by the majority.

At least, this is one possible interpretation of Mr Erdogan’s intentions, the interpretation no doubt of the demonstrators in Taksim Square. They do not care for his ideology of shopping and sharia, the former being the lure for the latter.

If Mr Erdogan sees democracy only as the means by which the will of the majority is imposed upon the minority, we should not complacently suppose that this is a problem confined to Turkey, a country that we are in the condescending habit of thinking of as the backward man of Europe.

Considerations not only of the wishes but of the welfare of the majority have increasingly trumped considerations of freedom in all western democracies.  Almost everywhere (the notable exception being Switzerland) politicians have become drunk not so much with power as with responsibility. Power, however, tends to follow responsibility, which after all is its justification; and where populations look to governors for protection and prosperity, governors are only too willing to oblige. Few people, certainly not members of a modern political class, are able or willing to resist the lure of increased power.

It is hardly surprising in the circumstances that a sense of limitlessness has emerged in our political classes that is not so very different from that of Mr Erdogan. Endowed with infinite responsibility and, at least in their own opinion, with infinitely benevolent intentions, and having come to office by mostly legitimate means, that is to say a majority or plurality of votes as laid down in a constitution, they think they have the right and indeed the duty to remake the world according to their own ideas, or what pass as their own ideas, that led to their election. They know no limits other than practical political ones. Building nations is to them what building a house is to an architect; while populations are children to be trained, deformities to be straightened, teeth to be braced. They are the orthopaedic surgeons of the soul.

The problem is not new, however, and is unlikely to have begun at a definite date such as that of the Battle of Hastings. No trend ever does start in a fashion so convenient for historians as a date. I came unexpectedly across a lucid statement of the problem in a book published ninety years ago by G K Chesterton called Eugenics and Other Evils, in which Chesterton presciently imagined the horrors in which the eugenic attitude would result. ‘Government,’ wrote Chesterton, ‘has become ungovernable; that is, it cannot leave off governing. Law has become lawless; that is, it cannot see where laws should stop.’ No one who has looked at the Labor Code of France, or the regulations governing Medicare, is likely to disagree with these statements.

Chesterton continued, ‘The chief feature of our time is the meekness of the mob and the madness of the government.’ It is unwise, however, to rely on the everlasting meekness of mobs.

Tocqueville and the Tragedy of the Democratic Average

Conservatism should help us negotiate the tragic tradeoffs of life: a way between market and political liberalism versus solidarity. Tocqueville can help.

The Capacity for Self-Government