Recent pieces by Pierre Manent, Anthony de Jasay, and Theodore Dalrymple argue that the bureaucratic glue holding together the political construct that is the European Union might be loosening considerably. What’s next won’t be pleasant. In support of this observation Dalrymple declared

That “Europe”–in the peculiar, Soviet-style usage of the word now so common–does not mean peace, but conflict, if not outright war. We are building in Europe not a United States . . . but a Yugoslavia. We shall be lucky to escape violence when it breaks apart. . . . I passed over the fact that Europe is, so far, the consequence of peace, and not its cause; that multilateral agreements between countries have always been possible without the erection of giant and corrupt bureaucratic apparatuses. . .

Something in Dalrymple’s short post reminded me of Roger Scruton’s eloquent defense of the nation-state in his book A Political Philosophy: Arguments for Conservatism. In the chapter “Conserving Nations” Scruton stated:

We in Europe stand at a turning point in our history. Our parliaments and legal systems still have territorial sovereignty. . . . At the same time, the process has been set in motion that would expropriate the remaining sovereignty of our parliaments and courts, that would annihilate the boundaries between our jurisdictions, that would dissolve the nationalities of Europe in a historically meaningless collectivity, united neither by language, nor by religion, nor by customs, nor by inherited sovereignty and law. We have to choose whether to go forward to that new condition, or back to the tried and familiar sovereignty of the territorial nation state.

The deeper point underlying their concerns is the evisceration by transnational governance of territorial democracy. That is to say that our borders are ourselves and contain within them the history and membership of a people. One way to advance this notion is in Orestes Brownson’s formulation that the location of political rule in the sovereign and solitary individual of Hobbesian and Lockean doctrine, or in the collective mass, as argued by nineteenth-century popular sovereignty theorists, fails to respond to actual human beings. Thus, man’s relational nature and his limitations revealed by his physical body and mortality entail a different set of conclusions for political sovereignty. Sovereignty is not given to persons or to a popular mass by natural right if they are unconnected to a particular jurisdiction. Rather, sovereignty follows only from the fact of holding territory; the fact has to precede the right. Given man’s limited condition, politics requires the circumscriptions of law, territory, and citizenship for it to be profitably ventured.

As Scruton observes in tones reminiscent of Brownson, “Vital to the sense of nationhood, therefore, is the idea of a common territory, in which we are all settled, and to which we are all entitled as our home.” This must not be thought as pure contract subject to “ongoing and severable agreement.” Territorial jurisdiction includes “a genuine ‘we’ of membership.” Accordingly, the membership holds either from an “immemorial past, or from a fictitious contract between people who already belong together.” But such membership is something built and maintained by citizens and persons together in common action. On this point, the nation state flounders in the late-modern age according to Pierre Manent. 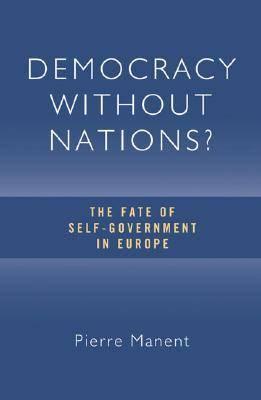 The European Union succeeds in the failure of contemporary politics to provide a place where the speech of citizens can be joined to concerted action. Pierre Manent’s insightful argument in a recent City Journal essay noted “there can be no human life without authoritative speech.” This is what the modern state was able to achieve in former days. “Where would the modern state find such speech? It found it in society–by becoming “representative” of society. Representation joined society’s speech to the action of a state lacking its own speech.” The tension preceding this representation was the “civic operation” of the Greek city-state, which the republican tradition of Rome carried on incompletely, and the “Christian Word” that proposed unity of thought and action such that “we might live according to the Word.” As such, the nation state is a compromise without a simplistic unity nor an overwhelming ambition to unify ideals to action. It seeks only to represent in various capacities the speech of society and join it to the state.

On this speech and action argument, Manent adds that it is the way to understand the power of political correctness: “Because speech is no longer tied to a possible and plausible action against which we might measure it, many take speech as seriously as if it were an action and consider speech they do not like equivalent to the worst possible action.”  While Manent’s essay is obviously directed at the European political situation, this point seems not lost on American politics. As Paul Seaton observed in his “Translator’s Introduction” to Manent’s book Democracy Without Nations?:

In the name of the sovereign individual and of a totally unified humanity, contemporary European democratic humanitarianism envisages and acts as if a postpolitical order has been attained in Europe . . . In America, we recognize this same mindset at work in the phenomena of political correctness and multiculturalism and in the underlying ideology of transnational progressivism. Absolutizing relativism, yet tempered by egalitarianism, this view is made plausible by the denial of any intractable “significant human differences.”

As Scruton is at pains to refute, the nation state fell in our esteem given the horrors of Nazism and our deep historical memory of the French Revolution and its terror. However, Scruton’s point is that these were pathologies of the ideological sort. The nation state’s contribution to these deformed expressions is not as clear as most believe.

The question that remains is what comes next? Manent’s prediction is sobering:

In fact, we may be returning to a situation of political indetermination comparable, in a sense, with what preceded the construction of modern politics. Yet there is a major difference. During the premodern era, competing political forms—the city, the empire, and the Church—checked one another, so it was necessary to create the unprecedented form of the nation. Today, the situation is reversed. What we find is not an excess, but a dearth, of political forms. At least in Europe, the nation is discredited and delegitimized, but no other form is emerging. What is more, the reigning opinion, practically the sole available opinion, has been hammering into us for 20 years the idea that the future belongs to a delocalized and globalized process of civilization and that we do not need a political form. Thus, the need for a political joining of speech to action has been lost to view. Technical norms and legal regulations are supposed to suffice for the organization of common life.

Rocky Mountain Water Markets: How the West was Watered

Revisiting Kelo and Reading Roger Scruton at Law and Liberty

Is the European Union Doomed?

According to Ian Kearns, calamity has befallen the European Union, and it will soon crumble. Is this the whole story?

The EU and Us

Having had my fun at the European Union’s expense, perhaps it’s time to move past Lufthansa jokes (although I do have a few more) and pay more serious attention to the EU and its federalism. There’s little room for American gloating or Schadenfreude: the ongoing EU disaster is hanging over our economy; and besides, our own federalism isn’t in such terrific shape, either. Read on to learn more.