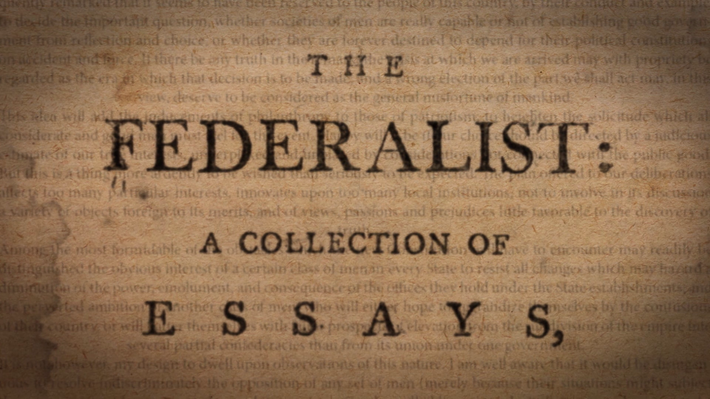 The Sixteenth of July, not having the same ring, will never compete with the Fourth for fireworks, picnics, or paeans to the document published on that day. But now that Americans have digested our annual hosannas to the natural rights theory of the Declaration of Independence, we might save a moment to remember the appearance, in the New York Independent Journal of July 16, 1788, of Publius’ broadside against a Bill of Rights. If the Fourth of July represents the American contribution to abstract universalism on rights, July 16 was the day we theorized it, in Federalist 84, as the achievable expression of a particular polity.

Received wisdom now holds that Abraham Lincoln completed the Founding project at Gettysburg by restoring the Declaration to its proper place: the apple of gold displayed in the constitutional frame of silver. There is great insight in that understanding. But it may also help to invert, as it were, the telescope and look closer in time. Rather than Lincoln completing the work of the Constitution by elevating it to the plane of equality and natural rights, there is a substantial sense in which Publius completed the work of the Declaration by grounding it in the concrete experience of a particular political community.

As Edmund Burke noted, abstract commitments receive meaning through particular political traditions. It is this expression in the concrete that grounds abstract rights and inhibits their abuse. As the French were to demonstrate in blood, only a year after Federalist 84 was penned, abstractions unmoored from the concrete, lived experience of human beings easily become unhinged. These utopian commitments do not have to grapple with the tradeoffs inevitable in prudent statecraft.

A human face needs to be put on abstruse philosophy. Lived experience does that. Liberty, equality, and fraternity are noble goals in the abstract. Carried to their extremes—assuming they have meanings that can be actualized, which the likes of Robespierre insisted they did—they delude their adherents into the belief that they are well worth the necks of an unsavory few, or unsavory thousands. Such projects tend to be evangelistic, as the French Revolution—and, later, the Russian—became.

Friedrich von Gentz wrote in 1800 (in a work translated into English by John Quincy Adams) that a crucial difference between the American and French Revolutions was that the former appealed to the particular rights of citizens:

Never, in the whole course of the American revolution, were the rights of man, appealed to, for the destruction of the rights of a citizen; never was the sovereignty of the people used as a pretext to undermine the respect, due to the laws, or the foundations of social security; no example was ever seen of an individual, or a whole class of individuals, or even the representatives of this, or that single state, who recurred to the declaration of rights, to escape from positive obligation, or to renounce obedience to the common sovereign; finally, never did it enter the head of any legislator, or statesman in America, to combat the lawfulness of foreign constitutions, and to set up the American revolution, as a new epocha in the general relations of civil society.

It is, however, to say that the project was incomplete until Publius expressed those principles through a particular regime. As Martin Diamond observed, the Declaration itself is remarkably agnostic as to forms of government; it was not intended to be a governing blueprint. But neither was its political philosophy wholly grounded until Publius made it concrete.

Gertrude Himmelfarb has argued that The Federalist lacked the universalist “pretensions” of the  French Encyclopédie, with which she contrasts it:

Designed for a specific purpose and a specific country, the papers did take the occasion to reflect upon human nature and society and even aspired to formulate the principles of a science of politics, but such speculations grew out of immediate, practical concerns and were advanced modestly and even tentatively.

This particularism is evident throughout Publius’ work, which is repeatedly grounded in the lived experience of the American polity. Thus, for example, Federalist 7, which deals with the potential for internecine conflict between states, combines a universal claim—that the states would make war for the same reasons all political societies make war—with a particular one: that these states occupy territory and situations particularly disposed to conflict. Similarly, Publius’ most compelling dismantling of the Anti-Federalists’ claim against an extended republic is, as Federalist 9 notes, the demonstrable experience of the already existing American states with territories that exceed the Baron de Montesquieu’s counsel.

Federalist 11 speaks of the “adventurous spirit, which distinguishes the commercial character of America.” The “sense of the people”—that is, this people, it is observed in Federalist 32 (one of several papers to take the constitutional and cultural temperature of the uniquely American republic and to cite it as a protection against abuse)—will prevent the exploitation of the supremacy clause.

In Federalist 48, we are warned to watch after the unique power of the legislature in “our governments.” Federalist 51 speaks of “considerations particularly applicable to the federal system of America.” Federalist 62 defends the necessity of a Senate in part on the grounds that, again, “our governments” are uniquely prone to excessive lawmaking.

Thus Federalist 84: This people’s rights are protected because this regime is assigned only particular powers, which are in turn checked and balanced in a manner suiting (as the previous papers have shown) the genius—that is, the type—of the American people.

This is not a universal claim. It is explicitly claimed for the American Constitution, specifically contrasted with others: “Here, in strictness, the people surrender nothing; and as they retain every thing, they have no need of particular reservations.” Most important, the Constitution is itself a bill of rights because it specifies “the political privileges of the citizens in the structure and administration of the government[.]” That is, rights are given meaning and protection through participation in, not merely immunity from, a particular regime, which is why the “ordaining” and “establishing” of the regime by “WE THE PEOPLE . . . is a better recognition of popular rights”—not, significantly, individual ones—than are philosophical constructs.

The particular regime must also give shape to rights that are otherwise loosely defined, if at all.  Federalist 53 had noted that liberty “lies within extremes, which afford sufficient latitude for all the variations which may be required by the various situations and circumstances of civil society.” Federalist 84 similarly observes that that the abstract phrase “liberty of the press” lacks concrete meaning. The polity must give it expression and, crucially, its protection ultimately depends on the “general spirit of the people and of the government”—that is, this particular people and this particular government. Abstract proclamations, Publius declares, mean little: They would better belong in “a treatise of ethics, than in a constitution of government.”

To be sure, Federalist 84, like the Declaration, makes bold claims as to rights. But they are now particular rights. The claim is not the rights of “all men” in all places, but rather these rights, of this people, protected in this particular way.

The universal and particular conceptions are not incompatible. One requires the other. The abstractions of the Declaration form the philosophical latticework of Federalist 84’s commitment to rights. But Publius’ expression of them in a particular community through the mechanism of measured self-government gives them meaning and grounding and helps to inhibit both their abuse and their corrosion into untethered individualism.

That concreteness is among Publius’ foremost achievements. Fireworks might be too much to ask for July 16. But without Publius completing the project that began on the Fourth, it is hard to imagine its success.

Donald Trump and the Political Philosophers

Can political philosophy help us think about Trump and contemporary America?