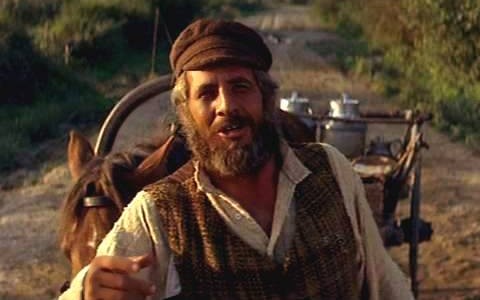 Fiddler on the Roof not only contains wonderful lyrics and music, but brilliantly captures an essential political dynamic of the West—the conflict between claims of tradition and the Enlightenment. It is also appropriate that the conflict takes place in the Jewish community, because Judaism prefigured that conflict. Sometimes it is said that the West is forged by the tension between Jerusalem and Athens—between religious tradition and philosophical principle, but I believe the conflict is present in the Bible, particularly in books like Job where the people of God argue with God on the basis of implicit principles.   Moreover, it was Baruch Spinoza, an excommunicated Jew, who laid the groundwork of the radical enlightenment that intensified conflict with tradition and gave us modernity.

The theme of the musical is introduced in the first song, appropriately entitled “Tradition.” Tevye, the everyman protagonist, states that traditions are what keep his people in “balance.” (The song subtly implies other traditions perform the same function for other people, like  Orthodox Russians). Without tradition, he says, a person is like a Fiddler on the Roof, always in danger of falling into the abyss. The entire play can be seen as a commentary on that statement, giving it shape and nuance. It becomes clear that traditions themselves are fiddlers on the roof, always in danger of falling themselves. And what prompts discarding are claims of enlightenment principles.

All these conflicts in Fiddler surround what constitutes an appropriate or even legitimate marriage within the community, thus making it particularly relevant to the debate over same-sex marriage today. In the first conflict, Teyve’s eldest daughter refuses the traditional matchmaker’s choice of a rich, old merchant in favor of a poor young man.   It follows from the enlightenment program for individuals that they are free to choose when their choices will not harm others. A second daughter chooses to marry a political activist, although that choice will separate her from family, defeating the strong tradition of an extended family living together in mutual aid. His youngest daughter chooses to marry outside the faith. The radical enlightenment can brook no ethnic restrictions in choice of mate.

But just as opponents deserve respect so do the proponents. The idea of individual choice when that choice does not do substantial harm to others is as the heart of the enlightenment. Perhaps it has even attained the status of a tradition itself, because it has made our world more prosperous and open to more possibilities for more people than ever before.

The other lesson from the play is how to resolve the conflict between claims of tradition and claims from the enlightenment. Teyve is a common man who recognizes that he is not a scholar expert in the Jewish law. His internal dialogues are not legal monologues, but debates of the heart. The Supreme Court cannot generate that kind of conversation. Only public debate in a democracy can.

Beauty and politics don’t come naturally connected in our political discourse—perhaps they should be a deeper concern in our common life?

Jonah Goldberg’s Suicide of the West introduces us to a (mostly) soulless rhetoric of liberty.