If there is one thing Pat Moynihan taught us, it is that talking about the family can be fraught with peril. Published at a time when nearly one in four African American children was born outside of marriage—seven times the rate for whites (see Figure 1)—the Moynihan Report gave a “faithful contemporaneous portrait” as Greg Weiner says. Yet it drew bitter reactions, he says, for its “sweeping historical and sociological analysis of the African American family.” According to the Report: “The Negro family in the urban ghettos is crumbling” because “in terms of ability to win out in the competitions of American life, they are not equal to most of those groups with which they will be competing.”

Why? “The racist virus in the American blood stream still afflicts us.”

This “stunningly candid assessment” that something was amiss, as the sociologist Glenn C. Loury has called it, was not intended for the public’s ears but for President Johnson’s. It leaked to the press, though, whereupon criticism rained down on Moynihan’s head. The sociologist William Ryan coined the term “blaming the victim” and said of the Moynihan Report that it would be “far more reasonable to conclude . . . that poor Negro families . . . are bitterly discriminated against and exploited, with the result that the individual, the family, and the community are deeply injured.” Feminist Laura Carper said: “The Negro family is not the source of the ‘tangle of pathology’ which the report attributes to the Negro community. It is the pathological relationship between white social institutions and the Negro community which has bred the statistics the report cites.”

Somehow reporting hard facts smacked of justifying “inequality by finding defects in the victims of inequality.”

The Moynihan Report explored the root cause of the fraying family—in sociologist Orlando Patterson’s words, “slavery’s effects on the black family as a critical component of African-American life.” Patterson found it deeply ironic that Moynihan “took a terrible beating from academics” as a result of the Report, for he was “an architect of the War on Poverty—the most radical national agenda for black people in American history.”

The observation that not all is right with the family has sparked controversy in the decades since the Report. In the 1990s, Vice President Dan Quayle blasted the television character Murphy Brown, the epitome of “today’s intelligent, highly paid professional woman,” for “mocking the importance of fathers by bearing a child alone and calling it just another lifestyle choice.” While Quayle criticized fathers in passing (he said “Failing to support children one has fathered is wrong”), the main problem was women “bearing babies irresponsibly.”

Writers for the show hit back with an episode discussing Quayle’s speech. Said Candice Bergen, as Murphy Brown: “Perhaps it’s time for the vice president to expand his definition [of the family] and recognize that, whether by choice or circumstance, families come in all shapes and sizes.”

And there’s the rub. As the social historian Barbara Dafoe Whitehead wrote in a famous Atlantic Monthly article afterward, “Dan Quayle Was Right.” And yet whenever “the issue of family structure has been raised, the response has been first controversy, then retreat, and finally silence.”

One lesson may be to stop pointing fingers. In a now-overlooked part of his comments, Vice President Quayle had said: “We can agree that some things are good and other things are wrong. . . . That honest work is better than handouts or crime. That we are our brother’s keepers.”

Our current President has framed an entire initiative around being My Brother’s Keeper. And President Obama knows of what he speaks. He launched his Promoting Responsible Fatherhood Initiative in 2009 by sharing his own story:

I came to understand the importance of fatherhood through its absence—both in my life and in the lives of others. I came to understand that the hole a man leaves when he abandons his responsibility to his children is one that no government can fill. We can do everything possible to provide good jobs and good schools and safe streets for our kids, but it will never be enough to fully make up the difference.

As Leah Sears, former Chief Justice of the Georgia Supreme Court, has said, “we must not turn a blind eye to the social injustice of the growing, class-based marriage gap.”

It is no easy task to talk about hard facts without stigmatizing others. But we simply cannot afford to ignore the structure of the family. The evidence speaks for itself. Take a single indicator: non-marital child births. 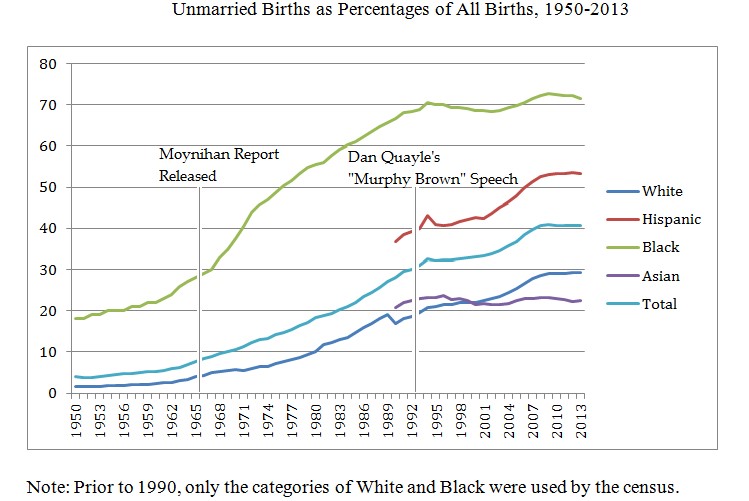 Patently, the challenges facing American families now transcend race and are no longer a Black or White phenomenon. Perhaps the fact that this is an issue for all of us will spark a renewed discussion of how we can better support families.

Some would not find these numbers distressing and question whether marital families are the gold standard. To be sure, marital families, like any other, break up, experience domestic violence, and face hardships.

But marriage reliably connects children to their fathers. Democratic and Republican administrations alike have recognized that a big part of the solution is focusing on fathers. This is why President Obama’s Fatherhood Initiative includes pilot grants for “healthy marriage[s] and responsible fatherhood”—as did initiatives in the Bush and Clinton administrations. But it’s not enough to educate people about marriage, hoping to cajole them into the marriage box. When two people can do as badly apart as they can do together, why marry?

A crop of new books by sociologist Andrew J. Cherlin and law professors June Carbone and Naomi Cahn explore the linkage between work and family for lower-income men. They tell a complicated, rich story whose upshot is this: For men, marriage and work go together.

The American family’s move away from marriage surely reflects, in part, just how decimated the working poor have become in our new information economy. Today, lower-income men, White and Black, are struggling to make ends meet and earn a living wage. But that wasn’t always true. At one time, these Americans would have had means within reach to improve their lives.

Consider my father. Raised in Appalachia in a shack with dirt floors, Dad lost both parents by age 17. Because he had no education, the sheriff advised him to enlist in the military. The Navy transformed my father’s life. It gave him a skill: welding. It provided him with an education. He earned his GED at night and took television-repair classes at Tidewater Community College in Virginia. He put my mother through school, too, which turned out to be fortuitous. Dad was not always keen on Mom working, but she carried our family when my father was burned while welding.

As Dad always said, “The Navy straightened me out.” But it did far more than that. It cleared a path to the middle class for him and for his family.

Today, economic opportunity has receded from those on the lower end of the scale. Even jobs that the less educated used to do require considerable reading and math ability now—and a degree. The working poor’s path into the middle class is now blocked. Auto plant jobs have been off-shored and the military has shrunk. Well-paying, stable jobs that provide access to education are increasingly the province of the upper middle class.

The retreat of working-class families from marriage coincided with the evaporation of blue collar jobs that once lifted skilled laborers into the middle class. Cherlin, in his book Labor’s Love Lost, documents the retreat and makes the case that we must strengthen families outside marriage, as well those who choose marriage:

So while supporting stable long-term cohabiting relationships should be part of any effort to stabilize working-class families, in practice much of what we may choose to do will consist of strengthening marriage among those who want it.

Some ask why family law has not done more. The classic account is that the American family changed so quickly that lawmakers waited for it to settle out. True, one does not build a house in a hurricane. But it is wise to lash oneself to a post. From the Clinton administration forward, that post was marriage. The unwinding of families from marriage (see Figure 1 above), should be a reality check for us. So many families are forming outside of marriage that it may simply not be possible for family law to exclusively protect only those individuals who choose to marry. (Family law does impose child-support obligations, on the married and the unmarried, but it otherwise leaves cohabitants adrift.)

Yet for marriage to be restored, we have to give lower-income men sound reasons to marry. This would require ensuring that being together is better than being apart. To walk back the economic decimation of the lower class would require remaking our whole economy. And that isn’t going to happen fast enough for the generation of children born today.

The aforementioned books have sparked a renewal of debate, but largely absent from it are modest, practical suggestions as to what can be implemented now to cement parents to children, whether inside or outside marriage. At the University of Illinois, we are hosting a series of discussions between judges, professionals in the family law system, and family scholars to ask the here-and-now questions:

• What can family law do to provide needed support to these families?

• Would voluntary paternity acknowledgments serve to connect fathers to their children?

• Do we need to build up obligations of support and norms of property sharing between cohabitants and can existing law serve that function or will it require new legislation?

• Can family law as presently structured assist unmarried parents to effectively co-parent after break-up and, if so, how would it do that?

• If we shore up marriage to better serve lower income families, what would that involve?

No one can deny, as Greg Weiner said, that the Moynihan Report of 50 years ago was a sadly accurate projection of family breakdown. Today, the question is whether the Report can serve as a rallying cry for shoring up the family. Drawing on extensive experience in the trenches, judges and practitioners are well positioned to identify achievable measures that can be undertaken now to improve the well-being of struggling American families. At the end of the day, Daniel Patrick Moynihan’s work started an all-important conversation. Now the challenge is to build upon it.

Evaluating the Moynihan Report on the Negro Family 50 Years Later

Owning the American Past

Two Cheers for the Moynihan Report . . . Or One

For More Privatization and Less Unionization at the TSA