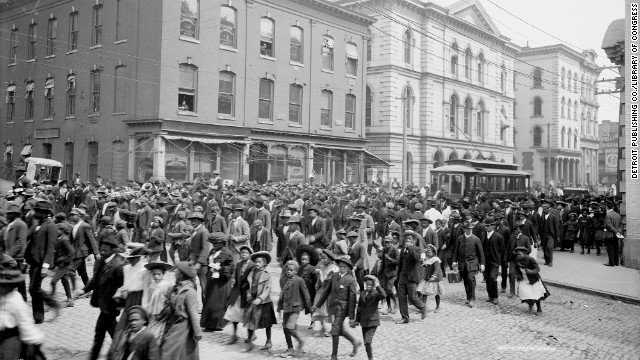 Lewis Harvie Blair remains one of the most curious and frustrating figures of post-Reconstruction Virginia. Blair, called by historian Charles E. Wynes one of the forgotten voices of opposition to segregation, distinguished himself by exposing the failure of “New South” industrial development and illustrating the economic benefits of racial integration. The Richmond businessman and writer held that the only way to rebuild industry in the South was to integrate all public-facing facilities and schools, invest in the education of workers, and reinstate the protection of African Americans’ civil rights.

Blair first made his case in 1887, in the pages of the New York Independent, and two years later published a book called The Prosperity of the South Dependent upon the Elevation of the Negro. Audiences outside the South praised it. For example, the Chicago Daily Tribune called Blair, “The Negro’s Champion. A Friend of Pompey Appears in an Unexpected Quarter.” In the South, Elevation of the Negro and its author received some condemnation in print but mostly icy silence. This reaction was no surprise, but Blair’s position was significant not merely because he was a Southerner but because he was a paragon of the postwar Southern gentry.

The Blairs, well-known as one of those famous “FFV’s” (First Families of Virginia), were by the 1830s merely a large, middle-class clan. Lewis was born in 1834. Because his father, a Richmond bank employee, died when Blair was young, he ended his formal education and used his brother William’s contacts in the Army to become a clerk to officers in Texas and Michigan, returning to Richmond in 1860. When the Civil War broke out, Blair decided against scaling the ranks with the help of his network of now-Confederate generals, including James Longstreet and Albert Sydney Johnston, and instead enlisted in the artillery.

As Wynes explains, Blair wanted no part of valor and believed “the artillery appeared to be physically the safest.” When the war ended, Blair went home and started a successful retail and grocery businesses that he sold to invest in shoe manufacturing and real estate. These enterprises flourished, and by rapidly turning himself into one of the richest men in Richmond, he restored his family name to prominence. As befitting a rich, well-bred Confederate veteran, Blair became the Virginian Democratic Party’s treasurer and continued to hold that position—until, that is, his first articles appeared in the Independent. By publishing the free-market case against segregation, Blair committed for his party and peers the ultimate betrayal, especially considering the recent turn of events in state politics.

By 1889, Virginia Democrats had finally secured control of the state government. Since the end of the Civil War, they had resisted the Reconstruction government, suffered and eventually suppressed wealthy Bourbons who favored bond-interest payments over state infrastructure investment, and finally defeated the Readjuster-Republican Party boss William Mahone with his coalition of poor whites in western Virginia and newly enfranchised African Americans. The Supreme Court’s opinion in The Civil Rights Cases (1883) had enabled states to deprive African Americans of their constitutionally protected privileges and immunities, and Democrats had begun in earnest to exploit the ruling with an eye to uniting poor and wealthy whites on racial grounds, in order to sever the common economic interests of poor white and black Virginians.

For Blair, this strategy had only one consequence: ruin. Drawing from 1880 Census data, he detailed how the hope for a “New South” grounded in manufacturing had failed. The entire industrial product of the South was a fraction of that in New York City alone. The South had a literacy rate of 68 percent, whereas in the Midwest it was 95 percent. The South lacked any significant banking or investment institutions, and had few newspapers and only one decent university—the University of Virginia—versus the Northeast’s Yale, Harvard, and Johns Hopkins among others.

How could any outsider be so easily taken in by the “New South” publicity? Northern investors, said Blair acidly,

who undertake to learn the condition of affairs by a hurried trip in palace cars are usually taken in charge and coached by interested parties, who carry them to a few selected spots like Birmingham and Chattanooga, where there is much life, activity, and growth, and are told exultingly, “There! Look! Does this not remind you of Pennsylvania?”

Unlike his peers, Blair believed in a common human potential, and this required protection of individuals’ civil and property rights as well as their access to decent education. To illustrate, Blair told of a Southern gentleman’s visit to the imperial court of Brazil, where he found black Brazilians who were “educated in Europe and favored with wealth, [and] were much more elegantly cultured than he was himself.” In comparison, Blair found outside of Charlottesville a population of whites “noted for their ignorance, indigence and degradation, and the same conditions exist in the mountain regions extending from Virginia to the plains of Georgia.”

Blair linked white Southern backwardness to racial inequality. Despite its efforts to industrialize, much of the South remained agricultural and, thus, spread out across the countryside. Were the state of Virginia only to count white student populations to plan out school locations, rural schools would, on average, be 12 miles away from the students. This distance was impossible to travel on foot. Plus, because only white taxes would pay for the schools, the teachers’ necessarily paltry salaries would be “wretched implements . . . for they do not average the compensation of house-maids.”

However, were these schools integrated, the state could tax African American households to pay for them. Though these households earned considerably lower incomes, the amounts would have been sufficient to build and staff considerably more schools, which would in turn shorten the average student distance traveled. These schools would then produce better-educated workers, of both races, who could eventually build a truly New South.

The Virginia political leadership preferred having no schools to integrated schools, hoping, as Blair said, that “ignorance would do the work of knowledge.” This was, he believed, simultaneously morally bankrupt and economically disastrous. Early in his book he nonetheless emphasized economic arguments, because he believed that white Southern readers were not ready to consider racial equality except insofar as it benefitted them financially.

In early, stomach-turning passages, Blair describes educating African Americans in terms of training and raising livestock. The idea he tries to put across is that educating the former slaves and their descendants would enable them to do better work for longer. But as the book continues, Blair introduces moral arguments for restoring the protection of African Americans’ civil rights, including the repeal of segregation laws passed after the 1883 Civil Rights Cases decision. All institutions, he writes, are “public as regards their creation and their functions, and they are of the nature of railways, which may be private property, but which are public institutions.”

He notes that, even under political repression and segregation, African Americans had nonetheless succeeded in the market economy, building churches and training professionals in various fields. Blair believed that unleashing the potential of African Americans, alongside poor whites, would be the real source of a New South grounded in educated labor, resource development, and free trade. (Blair’s vehement critique of the tariff, published in 1886, was called Unwise Laws, a Consideration of the Operations of a Protective Tariff upon Industry, Commerce, and Society.)

Blair did not stop making his moral and economic case for racial equality with the publication of Elevation of the Negro. He composed an address to the 1893 Chicago World’s Fair titled, “The Southern Problem and Its Solution,” but a substitute speaker delivered it, as Blair was detained at home by business difficulties. The talk was later published in a reform journal, Our Day. For years, he engaged in debates over his controversial stance in the Richmond Times-Dispatch. Up to the late 1890s, Blair, rivaled perhaps only by George W. Cable of Louisiana, was a constant champion of civil rights as necessarily tied to prosperity.

At this point, the reader may puzzle at Blair’s being so obscure. A closer look at Elevation of the Negro reveals his nagging parochial influences. Therein he expresses nostalgia for “mammies” and admits to discomfort at the idea of staying in an integrated hotel. He seems unfamiliar with the details of African American life or prominent persons, so the case he makes for integration is rather detached from real life.

Perhaps this was not a faith that could have lasted—and in Blair’s case it did not. In the late 1890s, with the arrival of scientific racism and the pressure on Democratic leadership exerted by Populism, Blair turned about on these matters. Historians like Wynes and C. Vann Woodward have discounted the influence of racist anthropology. But my work in the Blair papers at the Columbia University archives found Blair’s two later-unpublished manuscripts filled to the brim with au courant discussions of “racial phenotypes” and detailed explanations of how “habit and habitat” improved the Caucasian race over the African, Mongoloid, and Semitic races.

In the first manuscript, he used scientific racism to justify turning his attention to protecting poor whites over African Americans, who he now said he believed should be deprived of all rights and protections—including the repeal of the Fourteenth and Fifteenth Amendments—in favor of being wards of the state allowed only a few forms of employment. The policy would have the effect of protecting white workers and improve their wages, thereby finally nurturing a heretofore stunted Southern middle class.

The second, later manuscript, composed around 1914, contains much of the same argumentation as the first. Additions include his denunciation of immigration of the allegedly racially inferior (especially the Chinese and Japanese), of Northern industrial tycoons (especially Andrew Carnegie), and of what he saw as the bellicose, imperial foreign policy of Theodore Roosevelt.

With the introduction of racist anthropology into Blair’s writing came abandonment of his previous, free-trade thinking. No doubt in response to Populism, Blair recommended protection for white labor and a new indifference to both personal liberty and property rights protections as a source for prosperity.

He was quite clear as to why he changed. When young, he had succumbed to the sentimentality of believing, with St. Paul,

that all are of one blood, and with Jefferson that all are created free and equal, that every soul born into the world possessed ipso facto an inalienable right to the elective franchise . . . [and] in the equality of and brotherhood of mankind and that education and equal conditions and opportunities would make all equal if not all alike.

But now that he was old, he had come to his senses. Whether or not he was being completely honest with his reader or with himself is not for us to say. After all, as Tocqueville said, who can see into the hearts of men?

We can only remark that the aforementioned Cable, his fellow white Southern advocate of racial equality, left Louisiana after years of threats and harassment. Lewis Harvie Blair, it would seem, preferred to abandon his principles and stay in Richmond.

If this condemnation seems harsh, or worse, “presentist,” it is only out of regret that Blair could not prevail on his Southern peers—that he could not live up to the principles of St. Paul or Jefferson—to roll back segregation, avoid the economic stagnation and political corruption he had once predicted it would produce, and most of all spare the terrible human cost to innocent African Americans across the South in the ensuing decades.

Who Are the True Heirs of the Reconstruction Republicans?