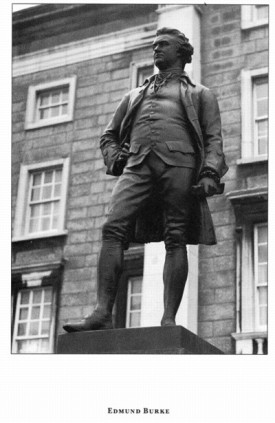 When I see the spirit of liberty in action, I see a strong principle at work; and this, for a while, is all I can possibly know of it. The wild gas, the fixed air, is plainly broke loose: but we ought to suspend our judgment until the first effervescence is a little subsided, till the liquor is cleared, and until we see something deeper than the agitation of a troubled and frothy surface. I must be tolerably sure, before I venture publicly to congratulate men upon a blessing, that they have really received one. Flattery corrupts both the receiver and the giver; and adulation is not of more service to the people than to kings. I should therefore suspend my congratulations on the new liberty of France, until I was informed how it had been combined with government; with public force; with the discipline and obedience of armies; with the collection of an effective and well-distributed revenue; with morality and religion; with the solidity of property; with peace and order; with civil and social manners. All these (in their way) are good things too; and, without them, liberty is not a benefit whilst it lasts, and is not likely to continue long. The effect of liberty to individuals is, that they may do what they please: we ought to see what it will please them to do, before we risque congratulations, which may be soon turned into complaints. Prudence would dictate this in the case of separate insulated private men; but liberty, when men act in bodies, is power. Considerate people, before they declare themselves, will observe the use which is made of power; and particularly of so trying a thing as new power in new persons, of whose principles, tempers, and dispositions, they have little or no experience, and in situations where those who appear the most stirring in the scene may possibly not be the real movers.

The Ides of March

Law and Moral Obligation II: A Response to Ilya Somin

Many of the crises that national conservatives want to fix were, in part, created by politicians thinking they can solve every malady.