I’m going to ventilate, yet again and at the risk of further endangering the planet, over climate change—more precisely, the toll that the obsession has taken on our political institutions. Since everything is connected to everything else, I take the liberty of starting far afield—in Germany, and with a map: 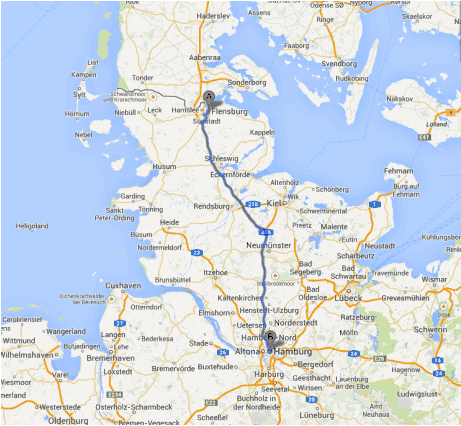 A thin blue line winds from Brunsbuettel (near the mouth of the big river, the Elbe) to past Rendsburg to Kiel. That would be the Nord-Ostsee Kanal, aka Kaiser Wilhelm Kanal. Because the only other way from the North Sea (to your left) and the Baltic (to your right) is around Denmark, the canal is the busiest in the world, or rather it has been: for some time earlier this year it was shut down because the locks are broken. (They’ve since been fixed temporarily but now the operators are on strike.)

The purple line that runs from Hamburg to Flensburg and points South and North is part of Autobahn 7—as you see, the only Interstate that connects Scandinavia to the rest of the continent. No great bargain to begin with (two lanes in each direction, one permanently occupied by trucks, tractors, and Danish trailers), A 7 crosses the Kaiser Wilhelm Kanal near Rendsburg. The bridge over the periodically functioning canal is also broken and now closed to all truck traffic. Ditto a nearby tunnel through downtown Rendsburg. For trucks there’s no way—none—from Stockholm to Berlin or from Kopenhagen to Paris except over village roads that are narrow and tricky even for passenger cars (been there, driven them).

The economic costs are huge, and they hit large corporations as well as the small business Mittelstandthat’s supposed to dominate German politics. How is this happening? Because for two decades running, Germany has been under-investing in its infrastructure, all across the country: there’s no funding to keep the existing infrastructure in repair, let alone to improve it. Germany needs every nickel for the welfare state; and it doesn’t want to run larger deficits for fear of signaling to the Greeks etc. that heck, austerity is good for thee but not for me.

Not, mind you, that there’s no money for any kind of infrastructure. All along the A7, for 200 kilometers, you see this:

These hideous beasts are subsidized out the wazoo (as are solar facilities, with respect to which Germany has had the brilliant idea of fighting a subsidy war with China). They are horridly expensive, and many don’t connect to any energy grid. Because they’d deteriorate unless they move, a great many of them are powered by diesel engines.

Policy-wise, all this sounds a lot like the U.S.—a ruinous transfer state and, hence, an infrastructure policy straight from Atlas Shrugged; coupled with a mad-cap “investment” in exotic technologies and masochist policies that have zero or negative pay-offs unless they are adopted on a global basis, which everyone knows they won’t. There is, however, a meaningful institutional difference.

Ask, in Germany, what blithering idiot embarked on this course, and the answer is pellucid: Chancellor Merkel and her legislative coalition. The Energiewende , meaning a turn to solar and wind power and away from anything that might actually sustain an industrial economy, is a major topic of the current electoral campaign. It’s true that the opposition parties want yet more Wende and yet less Energie; but it’s still the voters’ choice.

Stateside, the trade-off between the transfer state and investment is likewise subject to politics and elections (and here as there, the geezers are winning hands-down). Not so, however, with global warming delusions: they’re totally on autopilot, and little can be done about it by you, me, the Congress, or anyone else. More on that next time.

The Culture and Politics of Economic Growth