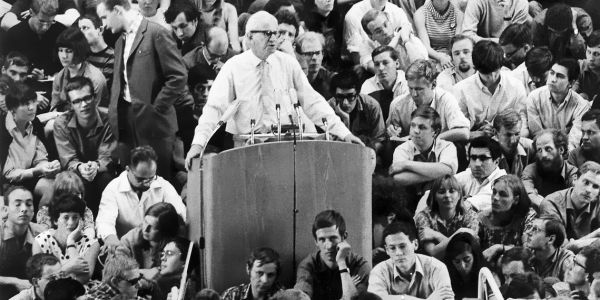 Herbert Marcuse, a man who managed somehow to reconcile revolutionary romanticism and opposition to all that exists with the cushy lifestyle of the high-profile academic, once enthused the spoiled brats of the whole Western world with his turgid prose, Teutonic pedantry, vacuous utopian abstractions, and destructive paradoxes. All that endures of his work, I suspect, is a familiar two-word phrase: repressive tolerance.

This, if I remember correctly, was the kind of tolerance found in capitalist countries, where people could say and do what they liked, the better to disguise from them the real conditions of their own enslavement and prevent them from following their true (which is to say revolutionary socialist) interests. True freedom was only achievable through everyone’s agreeing with Herbert Marcuse and acting as he suggested—or directed.

History repeats itself, as Marx said, but not in precisely the same form. First comes tragedy, then farce. It is the same with the concepts of radical intellectuals, except that they first emerge first as foolish and then return as despotic. Repressive tolerance: that is what Brendan Eich, the deposed chief executive of the Mozilla Foundation, recently experienced.

Mr. Eich, you will remember, put forward a view of marriage that, until very recently, was universally acknowledged, namely that it was a social, contractual and sacramental arrangement between a man and a woman, in just the same way that a horse for Mr. Gradgrind was a graminivorous quadruped. Marriage, whether you thought the institution good or bad, was between a man and a woman; it just was so. Homosexuals, and even the polymorphously perverse community, thought no different. Suddenly, within an historical batting of an eyelid, this definition has become not only invalid, but a sign of the most terrible bigotry.

It is true that Mr. Eich backed his words with some of his own money, but why should he not have done so? He thought the cause a good one, as do a considerable proportion of the population, who sense that homosexual marriage is not so much an extension of rights as another nail sunk in marriage’s coffin, its interment having long been desired and indeed plotted by radical intellectuals. For if marriage is not between a man and a woman, why should it be anything in particular at all? More than one opinion on the subject is therefore possible, at the very least.

On the other hand, none of Mr. Eich’s own fundamental rights was infringed by his more-or-less forced resignation. This was because the foundation was not saying that Mr. Eich had no right to say what he said in public or to make his monetary contribution; it was saying that he had no right to do these things and be chief executive of the Mozilla Foundation. This is a vitally important distinction. Possessing the duly constituted right to impose conditions on employees, the foundation’s directors did nothing wrong, in any formal sense, in forcing his resignation.

In a free society, people who employ others should be permitted to hire, not to hire, to fire, or to retain employees for any reason they choose, including the most discreditable or arbitrary ones. (Public employment is another matter.) For while it is true that no free society can long flourish where people exercise no virtue, there can be no free society in which people are forced to behave virtuously—where what is deemed virtuous is laid down by law and moreover subject to gusts of moral enthusiasm.

We all live (thank goodness) in a matrix of many different communities, interest groups, and economic, religious, and social bodies. If we are members, for example, of a philatelic society, we discuss stamps with our fellow members, not abortion or the death penalty or the proper rate of income tax, let alone do we require certain opinions on those subjects as a condition of membership. People willingly suspend the expression of opinion on such matters, as not being germane to the purposes of the society. We maintain friendly relations with people with whom, on some things, we might violently disagree.

When we become monomaniacs on any subject, however, we make opinion on that subject the touchstone of our willingness to associate with, employ, or otherwise engage with our fellow citizens. We make correct opinion the whole of virtue, so that we cast the holder of incorrect opinion into outer darkness as far as our sympathies either with or against him are concerned. No doubt there are some opinions so appalling that they are genuinely beyond the pale of civilized society (though it must also be remembered that very good people do sometimes express appalling thoughts), but holding to an immemorial view of marriage can hardly be one of them.

One of the reasons our society appears less tolerant than it ought to be, and why so many people are now afraid to speak their mind in so many situations, is that a spirit of puritanism of opinion is abroad. This puritanism is not puritanical in the old sense. On the contrary, it is inclined to attach itself to libertinism. But it wants to send to Coventry all those who think that the removal of restraints on conduct is not necessarily a good thing. It brands them as ipso facto bigots (as, of course, some but not all of them will be), and is prepared to punish them, so far as is possible, for holding the wrong opinions.

Thus are created what one might call microclimates of totalitarianism in which people live in fear: fear of losing their jobs, fear of social ostracism for having said or even thought the wrong thing.

This is a problem that is neither of the government’s making nor susceptible to solution by government. (Indeed, government action can only exacerbate it.) The problem lies in the human heart—in its lust for power and thirst for domination, in its pride in its own goodness.

Tolerance is a habit of the heart that is acquired by self-restraint and not merely through a set of political arrangements. If we are not tolerant of those with whom we disagree, we are not tolerant. After all, it takes no great tolerance to tolerate those who agree with us. Insofar as our societies remain tolerant, it is not because the people who compose it are tolerant. It is because they are not politically powerful enough to impose their views on everyone else.

The new puritans, viewing themselves as tolerant, would be prepared to repress the intolerant—by definition, those with whom they disagree. Thus does repressive tolerance come to have a real meaning in our time. As Herbert Marcuse’s favorite philosopher, Hegel, said: The owl of Minerva takes wing at dusk.

Keys to the Progressive Kingdom

Decouple the language of rights from their theological foundation and rights become mere assertions.