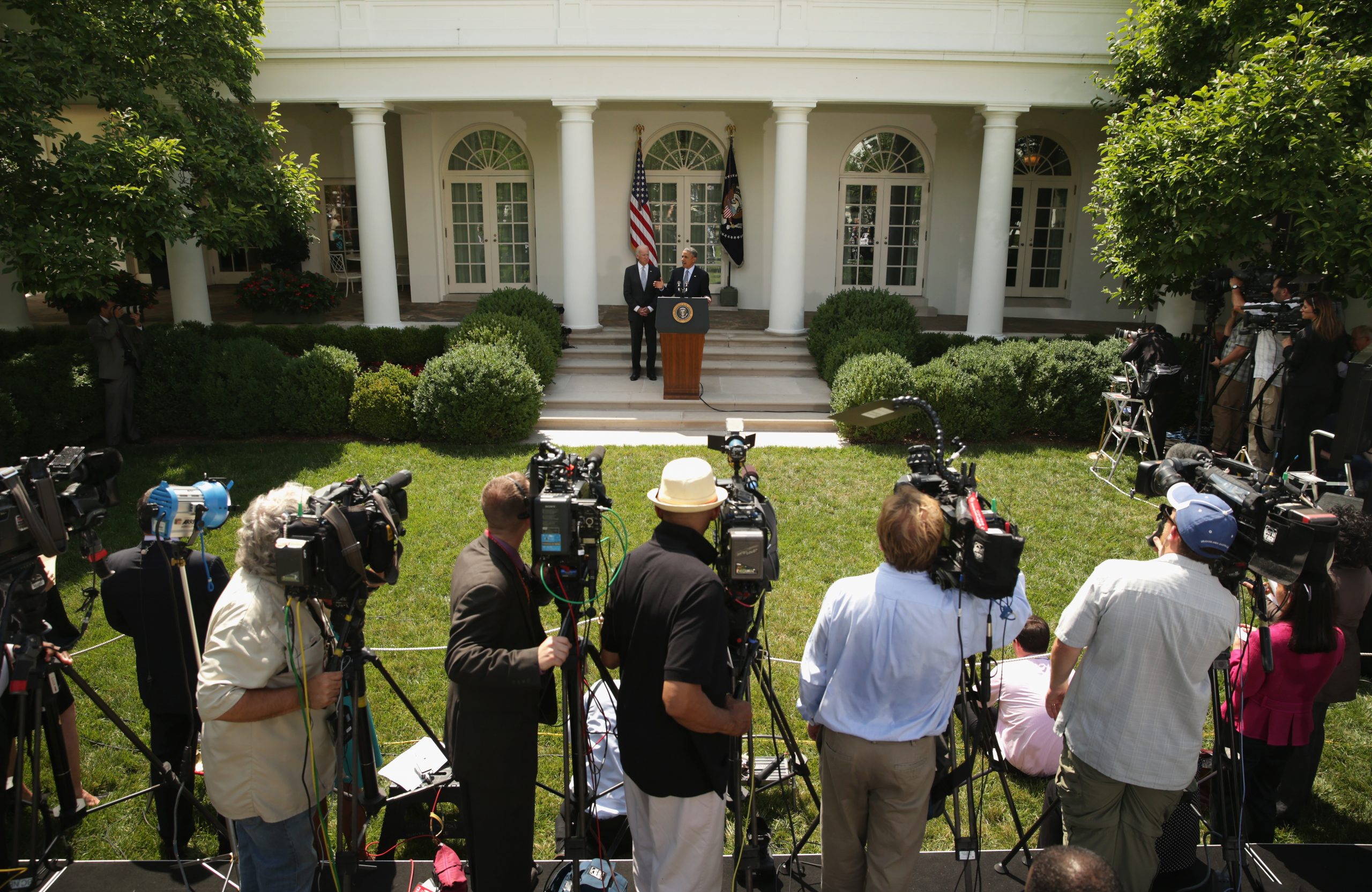 We will soon know if the U.S. Senate changes hands, but I’m not one of those waiting with bated breath. I had lunch with a prominent conservative columnist a while back. “It’ll be different in November,” he exulted. “We’ll take the Senate!” “And then what will happen?” I asked. “We’ll pass legislation and send it up to Obama,” he answered. “And then what will happen?” I asked.

My friend thought that the most arrogant and narcissistic President the country has ever seen would blanche before Mitch McConnell. Count me a skeptic. We have gridlock this year, and we’ll very likely have gridlock in 2015, whatever happens in November.

Oh, I know there’s the Senate’s advise and consent role, when it comes to judicial appointments. Conservatives like to pretend that that’s important. All it means is that, with divided government, we won’t see Justice Eric Holder. So we’ll see Justice Elena Kagan. Tell me what’s the difference.

The mystery, then, is why people care about Congress, and pour money into senatorial races, when we can expect the gridlock to continue. Is it that membership in the Senate is a trying ground for a presidential run? The other possibility is that Democrats hope for a repeat of 2008 in 2016, with Democrats in control of both ends of Pennsylvania Avenue. That still matters. When that happens, legislation does get passed, as it did in 2009 and 2010. Obamacare. Dodd-Frank. But the message of the last few years is that the presidential power to rule by decree can do almost the same thing as an act of Congress.

As if to underline the impuissance of Congress, President Obama is readying a plan to regularize millions of undocumented aliens, we are told. He’s done this before, when Congress refused to pass the Development, Relief, and Education for Alien Minors (DREAM) Act. This time we’re talking about millions more people. Remarkably, one hears he plans to give them green cards. If that happens, we’ll have arrived at an era of full presidential power, of the kind I described in The Once and Future King.

Could that happen? Just maybe. First, Obama might exercise his inherent prosecutorial discretion (called the Royal prerogative in Canada and Britain) not to deport them, and moreover to regularize them under a program that offers them a quasi-legal status. Some people would consider this illegal, even unconstitutional. I don’t buy that. I have a different definition of what’s legal, taken from John Austin: laws are commands of a sovereign, backed by force. Obama is effectively the sovereign, and he commands all the guns.

End of story. Unless perchance you harbor the fond hope that the fainéant John Roberts Supreme Court will discover limits to the political question doctrine and choose to intervene in a turf war between the executive and legislative branches. I don’t see much chance of that. Even John Boehner chose not to litigate when Obama thumbed his nose at Congress with his Deferred Action on Childhood Arrivals, after Congress refused to pass the DREAM Act. That was 1.8 million people. Now we’re talking five to 10 million people. But the principle is the same, and I wouldn’t expect a court that legitimized Obamacare to rise from its Merovingian supineness.

And who really could make a federal case of this? Not the Lockeans amongst you, for it was the author of the Second Treatise of Government who made the strongest case for the Royal prerogative, once his chap was safely on the throne.

Section 160. This power to act according to discretion, for the public good, without the prescription of the law, and sometimes even against it, is that which is called prerogative: for since in some governments the lawmaking power is not always in being, and is usually too numerous, and so too slow, for the dispatch requisite to execution; and because also it is impossible to foresee, and so by laws to provide for, all accidents and necessities that may concern the public, or to make such laws as will do no harm, if they are executed with an inflexible rigour, on all occasions, and upon all persons that may come in their way; therefore there is a latitude left to the executive power, to do many things of choice which the laws do not prescribe.

Section 168. The old question will be asked in this matter of prerogative, But who shall be judge when this power is made a right use of? I answer: between an executive power in being, with such a prerogative, and a legislative that depends upon his will for their convening, there can be no judge on earth; as there can be none between the legislative and the people, should either the executive, or the legislative, when they have got the power in their hands, design, or go about to enslave or destroy them. The people have no other remedy in this, as in all other cases where they have no judge on earth, but to appeal to heaven.

Sounds like John Roberts, doesn’t it? All we have is the Appeal to Heaven, thought Locke. Remember the Appeal to Heaven flag? It was hoisted by the American navy in 1775, at the command of George Washington. But that’s too extreme. Or as John Kerry might put it, that’s so 18th century. We don’t do revolutions any more.

Mind you, the de facto amnesty would upset a great many people, Republicans especially. With the kind of electorate America had in 1960 there wouldn’t have been a President Obama. There’d have been a President Romney. Heavens, there’d have been a President McCain. Since 1950, however, we’ve seen the arrival of a motley band of ill-educated people, without the least allegiance to or even knowledge of America’s Founding principles, a cohort of people whose appearance in America was so aptly called the “barbarian invasions” by filmmaker Denys Arcand.

I am referring of course to the millenials. But we immigrants are nothing to write home about either, and the undocumented aliens would tip the scales for many generations towards one-party rule, were they made permanent residents.

So can the President unilaterally put millions of undocumented aliens on a path to citizenship? Not without a struggle. Under the Immigration Act, the number of refugees or asylees who can be admitted each year is not capped, unlike other categories of immigrants. Section 207 of the Act does contemplate a limit of 50,000 refugees a year, but then provides that the cap can be lifted if the President determines that admitting a greater number of refugees is justified “by humanitarian concerns or is otherwise in the national interest.”

Does Congress get a say in this? Not really. The Secretary of Homeland Security would be required to consult with Congress, but the legislative branch couldn’t prevent a mass admission of refugees without amending the aforementioned law—which in a gridlocked Washington wouldn’t happen. And what does admission as a refugee or asylee mean? Permanent resident status (the green card) and a path to citizenship and voting rights.

So the question you have to ask is, would Obama think it “in the national interest” under the Immigration Act to admit millions of likely Democratic voters? As it happens, he’s already told us. “I want to be very clear,” he said. “I’m going to do what I can [on immigration reform] . . . because it’s the right thing to do for the country.”

Nevertheless, the President’s discretion is limited by the definition of “refugee” under the Act. To be a refugee, one needs to show “persecution or a well-founded fear of persecution on account of race, religion, nationality, membership in a particular social group, or political opinion.” Suppose, however, that Obama announces that America’s undocumented aliens would be persecuted were they to return home. The President might, for example, ask immigration officials to accept as conclusive evidence of anticipated persecution an affidavit which refers to specific facts evidencing such a fear. The applicant for asylum has the burden of proving persecution, but under section 208(b), an administrative law judge might base his decision solely upon such an affidavit.

This wouldn’t be an easy matter to do. It would, at a minimum, require the appointment of a very large number of political allies as administrative law judges; but then, in July 11 of this year, we got a heads up that this might happen in a little-noticed proposal for the appointment of temporary administrative law judges to deal with immigration matters.

It’s all far-fetched, admittedly. But then we’ve learned to accept things we very recently thought far-fetched.

Will the Court Tame the Administrative State?

This term showed substantial, if still only incremental, progress in taming the administrative state and cabining its scope.