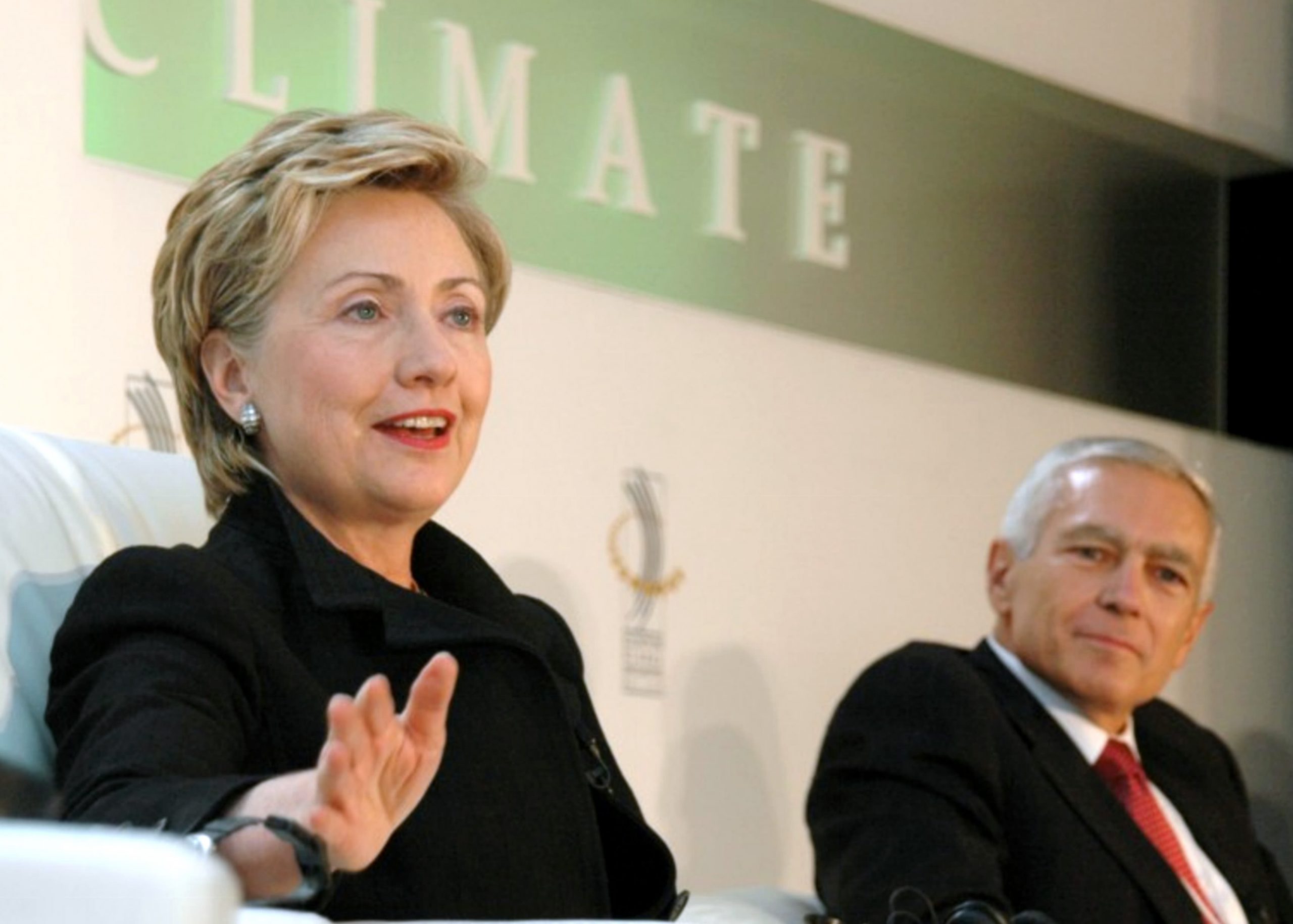 As she hawks her new book, Mrs. Clinton is saying provocative things. Her assertion that “American political system is probably the most difficult, even brutal, in the world” has raised eyebrows across the country.

In a world in which violent coup d-etat are still relatively common in many parts of the world, that’s a striking claim. American politicians are toppled by elections, not by violence. The parties hurl invective at each other, not ordinance. As John Adams reflected to Thomas Jefferson in 1823, “I should like to see an election for a President in the British empire or in France or in Spain or in Prussia or Russia by way of experiment. We go on pretty well—for we use no other artillery than goose quills: & our ink is not so deleterious as language & grape.”*

Eradicating harsh political conflict was unlikely. But, Adams hoped, sometimes it was possible to replace physical violence with rhetorical fire. Not a bad trade. And since Adams penned those words, many other nations have learned from our example.

That said, Mrs. Clinton might be onto something. The American political system was designed to make life difficult for politicians. In the founding generation, someone who obviously wanted office was presumed to want it for the wrong reasons. The founders thought of politicians like we think of toddlers—when they’re quiet, that’s when they’re really causing trouble. Politicians might not like it that plebeians can humble a sitting Majority Leader in Congress, as they did last week. (At least Mr. Cantor, unlike former Senator Lugar and current Senator Murkowski, is being a class act). But it beats the alternative.

The founders were close students of human nature, and designed our system with that in mind. All of us would like to be tenured in our jobs, with little fear of being fired. But that does not mean it’s a good thing, particularly for politicians. Recall Jefferson’s 1787 comment on Europe and America:

under pretence of governing they have divided their nations into two classes, wolves and sheep. I do not exaggerate. This is a true picture of Europe. Cherish therefore the spirit of our people, and keep alive their attention. Do not be too severe upon their errors, but reclaim them by enlightening them. If once they become inattentive to the public affairs, you and I, and Congress, and Assemblies, judges and governors shall all become wolves.

Power corrupts, and unwatched men grow lazy and complacent. They and are inclined to be self-serving. Such is human nature, as the architects of our constitution knew well. In Adams’ words of 1787, “power must be opposed to power, and interest to interest.” Madison said much the same thing early the next year: “ambition must be made to counteract ambition.”

Elections are a salutary check on our politicians, and open elections will, inevitably, be contentious and, often nasty. One of the reasons why so many in our political class want to limit spending on campaigns is in order to limit the ability of rivals to compete for office. Recall the example of Eugene McCarthy. He probably could not have mounted his campaign against Lyndon Johnson in 1968 under current campaign finance laws.

That would have been well and good with the Democratic establishment of 1968. It is no coincidence that the Citizens United case had to do with an independent group that wished to broadcast a film critical of Mrs. Clinton. Our political class would like to regulate who gets to say what about them. To be sure, they will allow the Sulzbergers (the owners of The New York Times) to editorialize, or shape the news however they choose, but they would prefer that other, less established and well connected, not have the same ability.

More generally, there is a side in American politics that would like to do away with checks and balances, and the resulting contention that are one of the hallmarks of our political system. Nowadays, that tune is sung in the name of “progress.” Thomas Friedman, for example, thinks it would be nice if America could be China for a day—allowing a dictatorship to do what all “right thinking” people think is necessary and good.

The idea is hardly new. In the early 20th Century Progressives like S.S. McClure concluded that “democracy was a failure and that a good dictator was needed.”

In this context, we should recall that Woodrow Wilson suggested that the “Newtonian” system of checks and balances was passé, and that it ought to be replaced by a more straightforward, “scientific” mode of government. That Progressive dream lives on into the 21st Century. In a sense, of course, it’s simply the old dream of unchecked power to do good. But remember that, at least in the Christian tradition, Satan is a fallen angel—suggesting that evil can be a misguided effort to do good.

In the early 20th century, of course, the PhD in Social Science was new. Perhaps it was not entirely unreasonable, to believe that credentialed experts, outside of the give-and-take, and checks and balances, of our constitutional system, would come up with better solutions to our political problems. But nowadays, when we know that our social scientists cannot even agree about what makes a given discipline worth studying, it’s hard to believe that experts can fill that role. Why, for example, are people with PhD’s better at figuring out where to draw the line between liberty and safety than are regular citizens? Experts might be able to figure out how much water each of us may use in his house, but why are they any better at figuring out if it makes more sense to limit the amount of water each toilet uses or, perhaps, to give each house a quota of water, and allow the owner to decide how to manage it, or, even to charge x for the first 100 gallons, y for the next 100, etc? The first option, of course, maximizes the ability of bureaucrats to feel more important, and to feel good about themselves. It’s no surprise that they incline to that answer.

There were real problems to be addressed in the early 20th Century, but that does not mean it was necessary to change our constitutional system. Those problems served as an excuse for Progressives to invent a fourth, unelected, and often unaccountable branch of government. Nowadays, a great deal of our legal code is written, enforced, and judged by the same people—unelected credentialed experts, who constitute a kind of post-modern robe nobility. That’s not all to the good. It is very hard to hold tenured civil servants accountable for their actions, and very hard to change laws that are, for all practical purposes, not written by our elected representatives.

Meanwhile, our politicians must still face the voters. So long as they do, it will make their lives difficult. President Washington had tremendous composure, but he also had thin skin, and criticism enraged him. On occasion he lashed, lamenting “that he had never repented but once the having slipped the moment of resigning his office, and that was every moment since; that by God he had rather be in his grave than in his present situation; that he had rather be on his farm than to be made Emperor of the world; and yet that they were charging him with wanting to be a King.”

Washington had no desire to be King. And he knew that being President, rather than King, meant he was open to public criticism, and that he would, inevitably, find himself caught in the middle of raging political storms. That made life difficult, but it was better than the alternative.

The goal of our system of checks and balances was not to end political contention, but to manage and guide it, rendering it useful for the public. Science, is, in a sense, not so different. Modern science works by jealousy , rivalry, and contention. The new brilliant physicist, chemist, or biologist, seeks to prove that the current conventional wisdom is wrong. For that reason, stifling dissent is a sin against science. What is true of science is even more true of politics. When we turn from science to public policy the stakes are, in a sense, higher, and they are also much more personal. They are also, often, contested over a much greater territory. Given that reality, our political system will often make life miserable for our politicians. And that’s a good thing. They will always complain about it, and some of them will try to change it. We would be wise not to listen. Should we attempt to “progress” beyond using goose quills as “artillery,” we may find ourselves returning to a world where our politicians turn to weapons of a more deadly kind.

*Adams’ pen probably slipped here. He probably meant to write, “not so deleterious language as grape.”

Sect and Power in Syria and Iraq