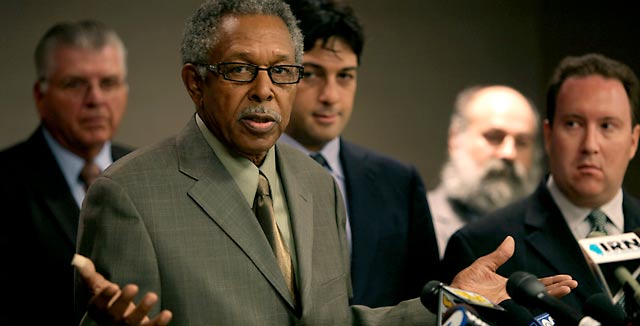 My last post ended by asking: where is the outrage at the disparagement of the struggle and sacrifice that the first generation of Black citizens made to vindicate their right to arms? The question was rhetorical, meant to emphasize how casually former Justice John Paul Stevens and Michael Waldman turn a blind eye to one of the foundational episodes in the story of Black Americans.

The tack taken by Stevens and Waldman is all too familiar. It takes for granted that some people more than others are allowed to play rough on the field of race. This is sensitive territory; but it deserves illumination and ultimately takes us to the precise point of this post.

Most Law and Liberty readers are probably familiar with Otis McDonald, lead plaintiff in the landmark case of McDonald v. Chicago. After D.C. v. Heller (2008), the McDonald case affirmed in 2010 that the right to arms must be respected by state governments. McDonald rested on the idea of substantive due process, though many hoped the Supreme Court would use it to revive the Fourteenth Amendment’s privileges or immunities clause, which was gutted by the Slaughterhouse Cases in 1873.

Otis McDonald died on April 4, 2014. The passing of this 80-year-old self-described “liberal, South Side Democrat” was widely recognized by RKBA types. I dedicated my talk at the National Firearms Law Seminar in Indianapolis to him. Among that audience he was known and admired. From traditional civil rights organizations, I can find no acknowledgment of Otis McDonald’s passing.

So another rhetorical question: Why have the nominal champions of civil rights ignored Otis McDonald and the self-defense interests of the sober, mature members of the Black community he represented?

The search for answers highlights priorities wildly out of whack. Compare the relative non-acknowledgment of Otis McDonald with the broad consternation over how Black criminals are treated. Michelle Alexander’s acclaimed book calling the state of Black incarceration the “new Jim Crow” illustrates this.

I want to be very careful here to emphasize that I absolutely condemn discriminatory treatment within the criminal justice system. I am not criticizing Alexander’s book and I am not referring to suspects whose guilt has not been established.

My point is different, more global. I am questioning where the plight of convicted criminals should sit within the hierarchy of civil rights concerns, and how much energy should be directed at that issue versus others. For me, the self-defense interests of reasonable, responsible members of the community, people like Otis McDonald, are a higher order concern than mistreatment of Black convicted criminals within the justice system.

Some might disagree with my judgment. However, it is not as if the Otis McDonald class gets a smidgen less attention than the criminals (whose victims, by the way, are generally other Black people), but that individuals like Otis McDonald are generally ignored, at best, and at worst castigated by progressives and nominal defenders of civil rights.

This baffling inversion of priorities has significant real-world consequences. For example, the outcry about disproportionate treatment of Black criminals has actually prompted the President of the United States to pardon or commute the harsh sentences of crack and heroin dealers. (See this link for the administration’s list of rescued drug dealers.)

I mention the President’s pardons not as a complaint in principle. (I would grant adults broad autonomy over what they ingest so long as they do it in private and behave themselves.) My point is one of comparison, and is quite specific.

The time and place are Atlantic County, New Jersey, in October 2013. The subject is a 27-year-old Black woman named Shaneen Allen. This Washington Post report of her being pulled over by a police officer captures it:

The officer who pulled [Allen] over says she made an unsafe lane change. During the stop, Allen informed the officer that she was a resident of Pennsylvania and had a conceal carry permit in her home state. She also had a handgun in her car. Had she been in Pennsylvania, having the gun in the car would have been perfectly legal. But Allen was pulled over in New Jersey, home to some of the strictest gun control laws in the United States. Allen is a black single mother. She has two kids. She has no prior criminal record. Before her arrest, she worked as a phlebotomist. After she was robbed two times in the span of about a year, she purchased the gun to protect herself and her family. There is zero evidence that Allen intended to use the gun for any other purpose. Yet Allen was arrested. She spent 40 days in jail before she was released on bail. She’s now facing a felony charge that, if convicted, would bring a three-year mandatory minimum prison term.

A final question, and this one is not rhetorical: Will the people who invoke the power and rhetoric of civil rights to condemn the disparate treatment of heroin and crack dealers, come to the rescue of a law-abiding Black woman whose crime was misunderstanding the multilayered bureaucracies that restrict the federally-guaranteed constitutional right to arms?

Shaneen Allen failed to appreciate that only one piece of the right to keep and bear arms operates in New Jersey. She perhaps concluded that two high-profile Supreme Court opinions affirming the constitutional right to keep and bear arms, plus a Pennsylvania license to carry a concealed firearm, would be enough to secure her right to carry a gun for self-defense, even in New Jersey. She was mistaken, and might be faulted for her slippery grasp of U.S. federalism. But with that as her crime, she is still infinitely more worthy of being rescued than anyone on the recent list of presidential pardons.

So far, there have been no protests or demonstrations seeking justice for Shaneen Allen. Like Otis McDonald, she is ignored by the nominal defenders of civil rights. Let us hope that this is not the end of the story.

Professor Glenn Reynolds has a comment about Allen’s case in USA Today and see this link for photos and more details about her. Please distribute it widely.