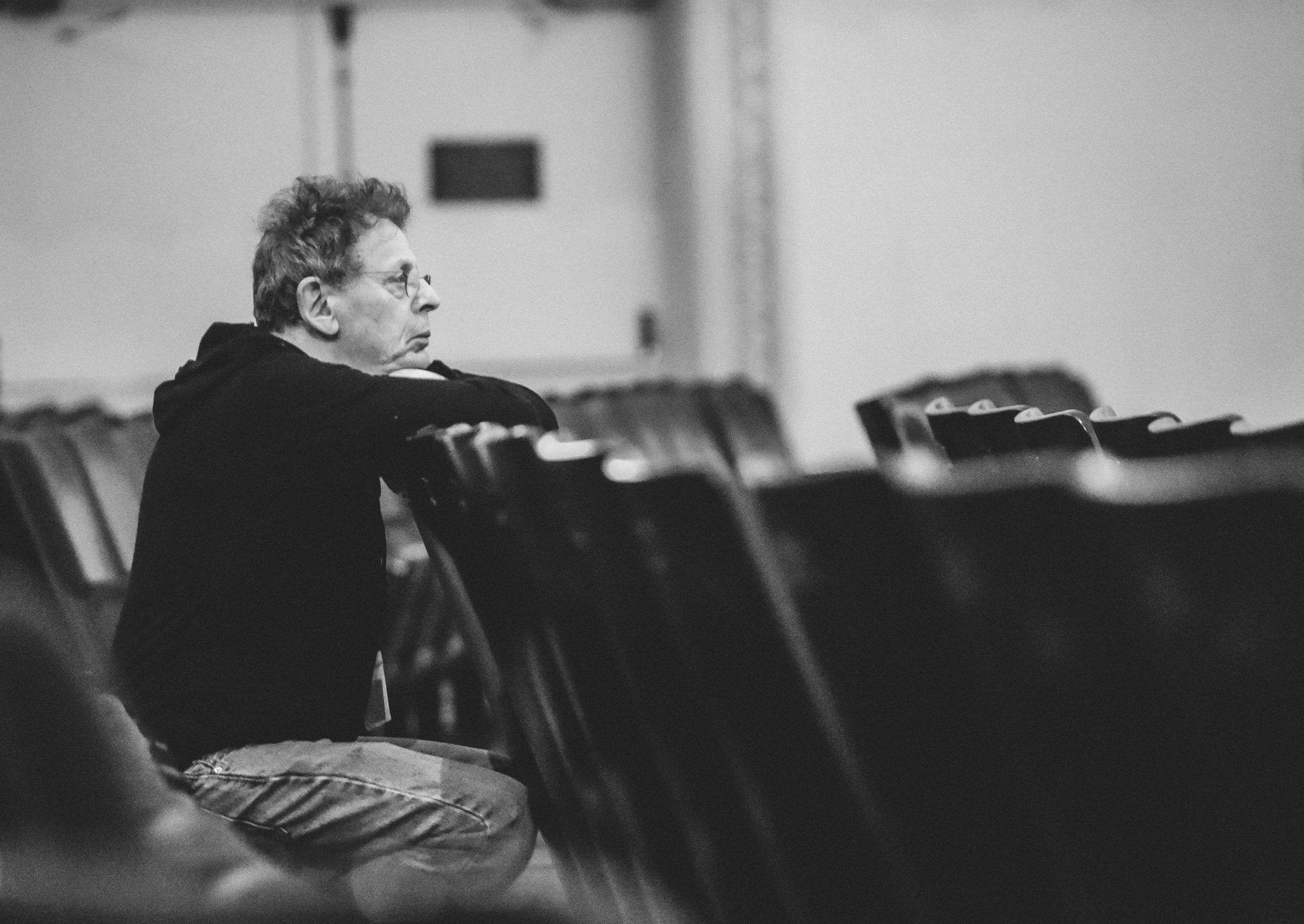 Early this year, the composer Philip Glass turned 80. Several celebratory concerts have taken place, and in the fall, there will be a debut of a new Glass work. Piano Concerto No. 3 will be performed at the Jordan Hall of the New England Conservatory of Music in Boston. The New York Philharmonic is scheduled to open its 176th season with the New York premiere of his Double Concerto for Two Pianos and Orchestra.

Glass’s popular works have made him the most famous living classical composer. Known by rock fans and regular folks as much as by lovers of orchestral music, he has written many movie soundtracks, including the soundtracks to The Thin Blue Line (1988), A Brief History of Time (1991), and The Hours (2002). Glass is famous for minimalism—a term he doesn’t like, preferring the phrase “repetitive chord structures.” His music is beautiful and mesmerizing.

Reading his 2015 autobiography Words Without Music, it becomes evident how deeply the composer  was formed by America—by her schools, sounds, artists, history, and cities. The son of Jewish immigrants, Glass is the product of a demanding classical liberal education, including the Great Books canon taught at the University of Chicago. Essential to his work are the very sounds—trains, street noises, factories—of the cities he lived and worked in, namely Baltimore, Chicago, and New York. In the biography, Glass describes his influences, including New York, “the powerhouse of a place” that drove his imagination and that pulses through his scores. “‘What does your music sound like,’ I’m often asked,” he writes. “ ‘It sounds like New York to me,’ I say.”

Of course, there were other influences on Glass, particularly Indian music, which he learned during visits to that country in the late 1960s. But Words Without Music shows that Glass would not have become who he is without America. Sadly, it’s a bygone America whose technology moved at a less frenzied pace and whose institutions had not yet been so thoroughly undermined by political correctness as to be unable to pass on the intellectual and artistic achievements of “the West.”

Philip Glass was born in 1937 in Baltimore to immigrants from Lithuania. His mother Ida was a librarian and English teacher; his father Benjamin owned a record store. Benjamin Glass often received promotional copies of new recordings, and spent many hours at home listening to them. “My father was self-taught,” Glass writes, “but he ended up having a very refined and rich knowledge of classical, chamber, and contemporary music. Typically he would come home and have dinner, and then sit in his armchair and listen to music until almost midnight. I caught on to this very early, and I would go and listen with him.” Among the selections were Igor Stravinsky, Béla Bartók, and Dmitri Shostakovich—what one critic described as “bracing modernist fare that Glass imbibed along with the classics and the pops.”

At age 15, Glass was admitted to a special, accelerated program at the University of Chicago. He recalled that on a train to the Windy City, hearing the rhythm of the train’s movement on the tracks, “the sounds of daily life were entering me almost unnoticed.” In Words Without Music, Glass cites Chicago itself as a major influence on his work. Glass went to symphonies that only cost 50 cents, visited modern art exhibits, and was exposed to bebop jazz greats, including Charlie Parker, whose brilliant and wild soloing broke established rules of harmony. At the University of Chicago, Glass was also required to read the Western canon in a program begun by philosopher and educator Mortimer Adler. It had a profound and lasting effect on the young composer:

I mentioned earlier the influence of the Great Books on the curriculum, but it extended far beyond that. Whenever possible, which turned out to be all the time, the books we studied would be first hand, primary sources. . . . The same primary-source method was carried out in social science, history and philosophy. Learning American history meant reading the Federalist papers and other late-eighteenth century essays by the men who wrote the Constitution. Of course, humanities meant theater and literature from ancient to modern. Poetry, same thing. The effect on me was to cultivate and understand in a  firsthand way the lineage of culture. The men and women who created the stepping-stones from earliest times became familiar to us—not something “handed down” but actually known in a most immediate and personal way.

Glass’s eclectic subject matter and primary source immersion included the study of science. This would be the subject of his breakthrough opera, 1976’s Einstein on the Beach, which was based on the life of Albert Einstein and would establish Glass as a major cultural figure.

After Chicago, Glass entered the Juilliard conservatoire in New York. He copied out the scores of the major symphonic works, and also became familiar with experimental theater, Beat poets and writers like Jack Kerouac and Allen Ginsburg, and Abstract Expressionist painters. When he won a $750 music prize, Glass purchased a BMW R69 motorcycle, which he took on long road trips. Unlike too many members of today’s cultural elite, Glass knew the contours of the country that gave life to his art. It was on such a trip that Glass met his future wife, the theater director JoAnne Akalaitis. In the 1960s the couple lived in Paris, with Glass on a Fulbright scholarship to study with Nadia Boulanger, who had also taught American composers Aaron Copland and Virgil Thomson.

After Paris, Akalaitis accompanied Glass on an extended tour of India and Nepal. From Alla Rakha and Ravi Shankar he learned how to organize two-and three-note phrases into longer musical cycles. Early in life and in fact right up until the late 1970s, when he was an established composer and even a celebrity, Glass worked blue-collar jobs to pay the bills. In the 1950s, during summer breaks as a Julliard student, he punched the clock at Bethlehem Steel in Baltimore. He also worked as a plumber. At the time that Einstein on the Beach premiered in the Metropolitan Opera House, he was driving a taxi, in which job he once picked up a criminal and was almost murdered by the man. Asked by director Martin Scorsese if he had seen Scorsese’s film Taxi Driver, Glass replied that he had been too busy actually being one.

Glass’s experience in the real world might explain why the composer never developed a taste for the brand of European nihilism that became fashionable after World War II. He was unimpressed when he came across the French Existentialists:

Their work was heavily nihilistic and oddly narcissistic, and these sentiments simply did not play well to the aspirations of a new and powerful generation of Americans who came up after World War II. Their books struck me as full of self-pity and despair at the meanness of their lives and the inability to find meaning therein, and my generation was impatient with all that.

By the same token, Glass gave short shrift to the criticism he faced in 1982 for appearing in a Cutty Sark whiskey ad. He was accused of selling out. “I called it ‘selling in,’ because the money went right into my work,” writes the composer. “It seemed to me that people who didn’t have to sell out, or in, must have had rich parents.”

Philip Glass’s 80th birthday is indeed cause for celebration, even if the joy be tempered by our awareness that we are a society whose elite has walled itself off from the rest of the country. America is not likely to again produce a classical composer who drove a cab, worked in factories, and raced a motorcycle across the country.

The bureaucrats that enforce "diversity and inclusion" are often all too happy to maximize ideological objectives at the expense of academic freedom.

Why Many Universities Make Free Speech a Low Priority