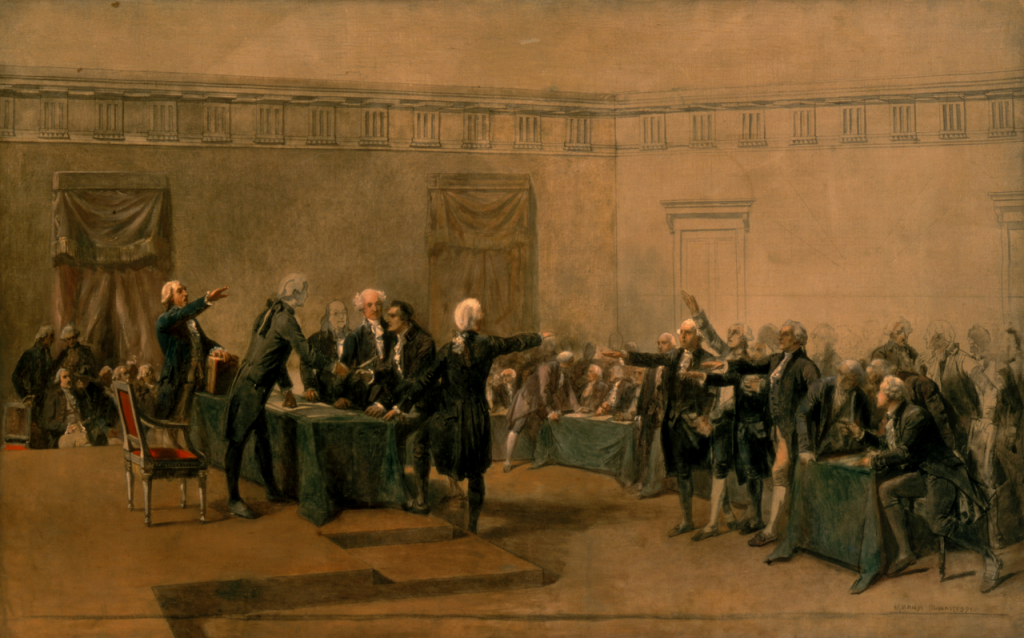 The Declaration of Independence of the United States of America, by Armand-Dumaresq, (c. 1873)

American political science has lost a significant contributor with the demise of Harry V. Jaffa (1918-2015).  We mourn the death of Professor Jaffa, and acknowledge that there will be many celebrations of his life and scholarly achievements to appear, especially from his epigones. Important contributions from Ken Masugi and Peter Lawler have already appeared in this space. As a mentor, Jaffa inspired a large number of graduate students who have assumed posts in the academy and government.  We call many of these scholars our friends, and continue to appreciate their interpretative approaches and defense of the American political tradition.

He should also be remembered by those of us who disagreed with him.  We differed with Jaffa on his assessments of Aristotle, St. Thomas Aquinas, John C. Calhoun, Abraham Lincoln, and contemporary conservatism, among other concerns.  While known as a severe critic of those with whom he disagreed, especially as evinced in various printed mediums, we found Jaffa to be willing to enter into frank and open dialogue with some regularity.  We believe his harshest criticisms were often reserved for those scholars he thought might “derail” his understanding of the Straussian philosophical mission.[1]

We were introduced to Jaffa by our friend, Melvin Eustace Bradford, Jaffa’s most famous and erudite interlocutor and respected adversary.  To understand Jaffa, Bradford opined that one must confront Jaffa’s argument that the Declaration was a revolutionary document; indeed, that it founded America on the principle of equality.  That “equality . . . is then both good in itself and good for its consequences.”  And that “the rooting of constitutionalism, and the rule of law in a doctrine of universal human rights, in the political act of a people declaring independence, is unique and unprecedented.”

Bradford responded to Jaffa that equality was not a conservative principle.  “Contrary to most Liberals, new and old, it is nothing less than sophistry to distinguish between equality of opportunity . . . and equality of condition. . . . For only those who are equal can take equal advantage of a given circumstance.  And there is no man equal to any other, except perhaps in the special, and politically untranslatable, understanding of the Deity.”  The only way such equality can be achieved is for it to be enforced by a totalitarian central government.  And people will demand that it is enforced because “envy is the basis of its broad appeal. . . .  Furthermore, hue and cry over equality of opportunity and equal rights leads, a fortiori, to a final demand for equality of condition.”[3]

We argue that the Declaration is not revolutionary at all. The Declaration simply “confirms an existing state of affairs.”[4]  By July 1776, Americans had been fighting the British for over a year (since April 1775).  The battles of Lexington, Concord, Bunker Hill, Sullivan’s Island had already been fought.  Congress had created the Continental Army, with George Washington at its head.  The colonies, led by Virginia, had already begun individually declaring their independence and adopting new constitutions that did not recognize the authority of either King or Parliament in their affairs.  In July 1776, a British army was descending upon Long Island, and the King had declared Americans to be in rebellion and outside of his protection.  As Pauline Maier, the foremost authority on the Declaration has said in response to Straussian attempts to incorporate it into the Constitution as one of our nation’s founding documents:  “The Declaration is not a founding document.  It is a de-founding document.”  That is, it did not found a nation, it was a secessionist document that declared the dissolution of a nation.

The idea of the “deferred promise” of Equality and universal human rights was engrafted onto the Constitution by Lincoln and subsequent generations of liberals.  It was not present at the Founding.  With Bradford, our primary objections to Lincoln stem from his “misunderstanding of the Declaration as a ‘deferred promise’ of equality.”  Bradford argued that “Lincoln’s ‘second founding’ is fraught with peril and carries with it the prospect of an endless series of turmoils and revolutions, all dedicated to freshly discovered meanings of equality as a ‘proposition.’”  Bradford called this peril a “millenarian infection” that could arm and enthrone a Caesar who would be empowered, through the rhetoric of the “deferred promise,” to “reform the world into an imitation of themselves.”[5]

Finally, in our disagreement, we also recognize Jaffa’s contribution to the ongoing debates in American politics.  Our understanding of the American regime was strengthened by our encounters with Professor Jaffa and his scholarship.  Jaffa was an unrelenting patriot, and his devotion to preserving our political order never wavered.  In many regards, the extended debate he and Bradford undertook proves that honest dialogue can take place even when confronting significant areas of disagreement.  It also suggests we have significant agreement on the vitality of the American regime and our need to defend the principles of the American Founding amidst the challenges that lie ahead.

[2] “Do I not bring philosophy down from the heavens and into the city—making it practical and political—when I demonstrate by my critiques of Kendall, Bradford, and Wills, that their doctrines are merely varieties of Confederate doctrine, and that the vital center for their beliefs is derived from John C. Calhoun? Do I not do that even more profoundly, when I show that the ‘Marx of the Master Class’ is not, in the crucial respect, so very different from Marx himself, since the proslavery attack on free society, and the Marxist critique of capitalism, closely coincide?” (Harry Jaffa, American Conservatism and the American Founding [Durham, N.C.: Carolina Academic Press, 1984], 136.).

Ramsey and Tillman on the Receive Ambassadors Clause

For shallow souls who never experience the virtue that grows out of inner turbulence, Dylan’s confession may be inscrutable.

Harry V. Jaffa, who died January 10, at 96, attempted to re-found conservatism on the basis of its most philosophical of principles.