James L. Buckley is a former U.S. Senator, federal judge, and real-life saint. The Federalist Society’s 2014 Annual Convention featured a presentation and panel discussion on his most recent book, Saving Congress from Itself. As the title suggests, Jim Buckley—even at age 91—is into tasks that are kind of biggish. His key proposal is to phase out any and all federal transfer payments to state and local governments.

Saving Congress from Itself is a must-buy and must-read. I wish I could write like that. 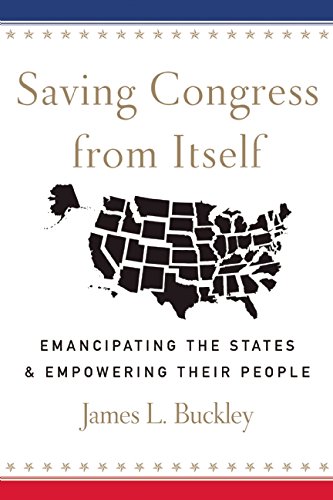 This small book is stuffed with shrewd observations and telling examples of “cooperative federalism” in action. (My favorite story: why it’s become impossible to build a one-lane bridge near Sharon, Connecticut.) And the book advances a big, bold, idea: cash out and then phase out any and all federal transfer programs. I have no idea whether that particular proposal will gain traction. But something on that scale is needed. Either we heed Senator Buckley’s clarion call, or else we become Argentina.

Totally out of character, I will sound a note of optimism. The cause of my good cheer is the Affordable Care Act. The ACA is the most extreme embodiment of the fake federalism that James Buckley and I myself abhor—and it is crumbling at all ends. Depending on the lessons we learn and on how we play our cards, it could be a complete game changer and open the door to large-scale reforms. There are six lessons here:

First: “cooperative” federal programs do not work. At some level we all know that. The response to Katrina was cooperative federalism; that did not work very well. Our education system is Katrina in slow motion (and has been for five decades). Evidently, though, a natural disaster doesn’t teach the obvious lesson, and a creeping one doesn’t either. The Hindenburg won’t do. You need Gettysburg—a grand initiative that turns into a debacle. Behold the ACA: a federal government that cannot build a website in three years is proposing to run a hugely complex program with 1,000 moving pieces. Nobody believes that. Nobody will attempt anything like it again for quite some time.

Second: the ACA marks the limit of fiscal illusions. As Senator Buckley explains, the point of joint federal-state funding is to evade responsibility for the inevitable failure and—my point here—to obscure the total cost. Both at the federal and the state level, joint funding makes the programs look much cheaper than they actually are. (An earlier draft of my remarks said that the programs exploit the stupidity of the American voter but then someone stole that line.) The ACA’s Medicaid expansion did not offer partial funding: at least for the initial years it promised states 100 cents on the dollar for expanding Medicaid. At that level funding can no longer do what it’s supposed to do, which is to drive up state spending and taxation. It’s simply cutting checks, from a budget that can’t support it.

Third: even at a hundred cents for expanding Medicaid, the unthinkable happened: almost half the states said “no, thank you.” More dramatically still, two-thirds of the states have said “no” to federal exchanges and subsidies. No one expected this, and frankly I can’t quite explain it. I have two guesses. One, the states no longer trust Washington’s promises. Total Medicaid costs were $450 billion in 2013. The program is growing at 13 percent and is expected to grow at 7 percent from hereon out, meaning it will at least double in ten years. (This is called “bending the cost curve”—upward.) The program is ruinous for states with or without ACA expansion, and no one thinks that the program is financially sustainable. Two, as a percent of state budgets, Medicaid now exceeds education funding, at about 25 to 22 percent. Budget items that aren’t federally funded have been cut to the bone. So Medicaid and education now compete directly against each other, and state legislators are trapped between AARP and the NEA—the most voracious lobbies in American politics. Cooperative federalism has started to eat its young and maybe its old, and not a moment too soon.

Fourth: the states’ decision to say “no” has brought the Constitution back into play. Regardless of what one thinks of the scope of the spending power, it only authorizes Congress to spend, not to commandeer. That matters, big time: without the anti-commandeering rule, there would be no King and Halbig litigation.

Fifth: the ACA has taught the states the power of collectively saying “no.” As Senator Buckley explains, a single state that says “no” to federal funding is shooting itself in the foot. But fifteen or sixteen states saying “no” will bring the entire federal scheme crashing down because the feds cannot possibly run the programs. HHS is learning that lesson in a hurry. Next up, maybe the states can teach it to the EPA, whose programs operate on the same principle.

Sixth: political polarization along state lines—sectionalism, as political scientists say—is a good thing. Why were there no grand funding programs prior to the New Deal? Answer, many states—the South—couldn’t be bribed into a federally sponsored tax-and-spend cartel because there was a non-negotiable issue: race. That’s mercifully behind us. However, we now have an increasingly unbridgeable sectional divide over rival social models. A firm bloc of states wants a European welfare state, and then some. That model depends on federal funding and fiscal illusions; so Illinois and New York and California want more of it even though they’re net payers. But a rival bloc of states, led by Texas, wants a more competitive and, if you will, libertarian model. Those states can no longer be bribed into federal schemes that are deadly to their entire business model. Witness their resistance to the ACA. The beauty is that the pro-federal funding states are basket cases and the dissident states are the most competitive in the country. I like the way this is going.

The federalism James Buckley wants to end is bankrupt—fiscally, morally, politically. Still, throwing it into reverse is a very tall order. Allow me to end on a note of caution and to note an obstacle that would-be reformers will have to take into account.

Among the most destructive consequences of “cooperative” federalism is its tendency to foster a social structure resembling that of Tunisia or Argentina. It’s not doing much for the poor. (If we wanted to help the poor we’d give the money to them, not to state bureaucrats.) What it does create—along with the K-Street kleptocracy that runs this town—is a vast intergovernmental bureaucracy and a vastly larger industry of consultants and contractors and hangers-on that, while nominally private, is completely parasitic on government. Princeton professor John DiIulio has shown compellingly that to a horrifying extent, this sector has become America’s middle class. And the waste and bloat so eloquently described by James Buckley is the lifeblood of that class.

To illustrate how far this has gone and how difficult it will be: in helping the ACA over the hurdle, the health insurance lobby, AHIP, sold the entire industry into government dependency. Unless the mandates stay intact and the subsidies keep flowing, the industry will cease to exist. So if the King plaintiffs win, it won’t be five minutes before Karen Ignagni—AHIP’s chief lobbyist—darkens Speaker Boehner’s and Senator McConnell’s doorway and begs for a fix. A bailout.

In that sure event, I ask my friend James Buckley to let mercy prevail and to entertain a friendly amendment to his phase-out proposal: one more federal grant, in the amount of $2,000. Conditional on Ms. Ignagni’s purchase of a one-way ticket to Siberia.

The Upside Down Constitution: Part I