President Obama lost the US-Syria war of 2013 before firing a shot. He did it by leaving no doubt that he had not thought through what he meant to accomplish by attacking Syria, nor what effect the attack would have, nor what the consequences of the attack would be, nor how he planned to deal with those consequences. His departure from the common sense of war and peace was so stark, so unmistakable, that it forced the American people to confront that common sense as they had not done for a hundred years. The Obama Administration had sought to justify the attack as “tailored.” The American people’s near universal rejoinder, “to what?” “to achieve what?” as well as the 80% consensus that the proposed war be voted on by Congress, augurs well that henceforth the American people will demand that war and peace be dealt with in a manner proper to a republic rather than an empire.

By deforming this war congenitally, the Obama Administration further discredited itself. No one publicly took issue with Russia’s official jab at it: “The West behaves towards the Islamic world like a monkey with a grenade,” much less parried it with the usual charge of “racism.” The high-level leaks that described the attack’s purpose in terms of “establishing the credibility of red lines,” of “a shot across the bow,” and of “fostering the possibility for positive change” amounted to a parody of our Foreign Policy Establishment’s abstract language. 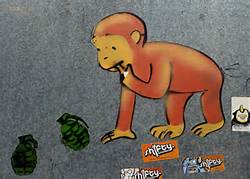 The Administration’s refusal to address the question “and then what?” led to even more specific questions that furthered its embarrassment: “What if the Syrian regime absorbs the initial American strikes (likely, since its valuable military assets are easily dispersable) and then commits further outrages? What is the next step? To what end?” The Obama Administration may well have been surprised at such questions, given how many times the American people had accepted the Foreign Policy Establishment’s abstractions over the previous century. But because the Obamians went to the well too often, they ended up looking like monkeys with grenades.

Events in Syria are of marginal importance to us, and on the edge of our ability to influence. Since the civil war in Syria is a major focus of the world-wide, longstanding struggle between Islam’s Sunni and Shia factions, what will happen there will be determined by Syrians and their neighbors regardless of what the US government does or does not do. The Syrian civil war’s importance to us, however, may well be that it is reminding us of how we should deal with matters of war and peace, namely: concretely, logically, un-emotionally, jealously matching the ends we seek with the means we are willing to use.

American statesmen have not done that consistently for a century. Woodrow Wilson took America into World War I to “make the world safe for democracy,” “to lay afresh a new plan for the foundation of peace among nations,” “to guarantee peace and justice among nations,” and other such un-definable things. Not enough people asked how anyone in his right mind could imagine accomplishing them, what force it would take to do it, and whether we had the force and will to eliminate any and all opponents to our plans. And so America ended up making the world safe for fascism and Communism and Imperial Japan.

During WWII Franklin Roosevelt refused to discuss concrete war aims, insisting instead on “unconditional surrender” of our enemies so that we could “abolish ancient evils, ancient ills.” That foreclosure of the American mind ended up putting half the world into Stalin’s hands. In 1961 John F. Kennedy committed us to “bear any burden” for the sake of freedom. That wholehearted abstraction turned out to be a halfhearted commitment to Vietnam that cost more than fifty thousand lives and triggered an upheaval of American society the end of which we have yet to see.

George Bush 41 assured Americans that his Gulf War coalition was finely calibrated to give us “a new world order.” Disorder and heightened terrorism resulted. Space does not permit citing the convoluted abstractions by which Bush 43 justified a “war on terror” against no one in particular that produced some six thousand American dead, six times that number crippled, and an endlessly expanding National Security State.

President Obama’s plan of attack on Syria was of a piece with his predecessors’ approach to war: Hid ends were hazy, there was zero correspondence between the declared ends and the means used. The immediate result would amount to what Machiavelli pointed to as the deadliest of errors: doing one’s enemies only a little harm. The longer term result was sure to be more trouble for America than before, with no plan for ending it.

Regardless of whether the Obamites are less adept than their predecessors or of whether they have simply repeated a bad script once too often, the obvious manner in which they lost a war before starting it may have taught us all some needed lessons.

The Invasion of Iraq: A Change in My Position