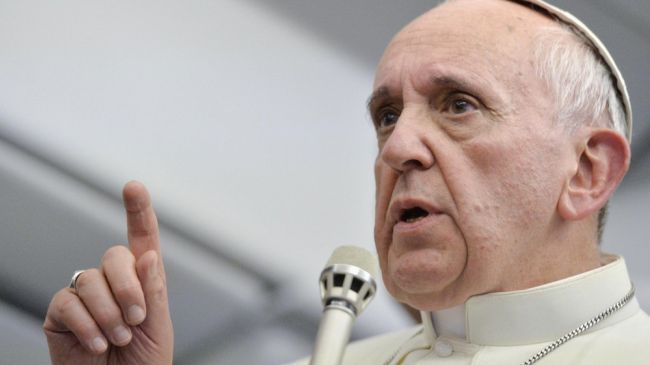 If there is one thing that religious leaders around the world seem to agree on today, it is the evils of income inequality stemming from a globalized economy.

Pope Francis said last year in his apostolic exhortation Evangelii Gaudium that “we … have to say ‘thou shalt not’ to an economy of exclusion and inequality. Such an economy kills.”

In a 2008 speech at George Mason University, the Dalai Lama asserted: “Economic inequality, especially that between developed and developing nations, remains the greatest source of suffering on this planet.”

Ecumenical Patriarch Bartholomew wrote in his 2012 Christmas encyclical that “the gloomy consequences of the overconcentration of wealth in the hands of the few and the financial desolation of the vast human masses are ignored. This disproportion, which is described worldwide as a financial crisis, is essentially the product of a moral crisis.”

It would seem the consensus is that economic inequalities have increased worldwide, and this is a clear moral evil. But when we examine the numbers, a somewhat different picture emerges. Even as inequality has increased, extreme poverty has simultaneously decreased—a clear moral good. Considered in this light, and with the help of Nassim Taleb and (in Part Two of this post)  Friedrich Hayek, I will examine the connection between inequality and poverty alleviation and argue that the data affirm, rather than refute, the moral merits of economic liberty.

It stands to reason that if religious leaders are so willing to condemn global capitalism for its apparent evils, they ought to be even more eager to praise its actual goods. I will recommend a different moral metric, drawn from St. John Cassian and St. John Chrysostom, that would support people of faith in being attentive to the plight of the poor while prudently engaging the economic realities at hand.

That inequalities are growing is indeed borne out by the facts. The World Bank History of Global Income Inequality Working Report states that from 1988 to 2008, “among the very top of the global income distribution and among the ‘emerging global middle class,’ which includes more than a third of world population, . . . we find most significant increases in per capita income.” According to this report, the top one percent has enjoyed an increase in real income of more than 60 percent in those two decades. That is not, however, the end of the story. In fact the biggest increases

were registered around the median: 80% real increase at the median itself and some 70% around it. It is there, between the 50th and 60th percentile of the global income distribution that we find some 200 million Chinese, 90 million Indians, and about 30 million people each from Indonesia, Brazil and Egypt.

Why only discuss one third of the world’s population? What about everybody else? The World Bank report says: “The surprise is that those at the bottom third of the global income distribution have also made significant gains.” The real incomes of the people at the bottom third rose between more than 40 percent and almost 70 percent. “The only exception,” says the report, is the poorest five percent, “whose real incomes have remained the same.”

Now, this still amounts to an increase in global inequality, but it is also really great news for some of the poorest people in the world. The report continues:

It is this income increase at the bottom of the global pyramid that has allowed the proportion of what the World Bank calls the absolute poor (people whose per capita income is less than 1.25 PPP dollars per day) to go down from 44% to 23% over approximately the same 20 years.

The Credit Suisse Global Wealth Report 2013 confirms both this high global inequality and a simultaneous increase in global wealth. “Global wealth has reached a new all-time high of USD 241 trillion,” says the report, which is

up 4.9% since last year, with the US accounting for most of the rise. Average wealth hit a new peak of USD 51,600 per adult, but inequality remains high, with the top 10% of the world population owning 86% of global wealth, compared to barely 1% for the bottom half of all adults.

Commentaries on wealth often focus exclusively on the top part of the pyramid, which is unfortunate because USD 40 trillion of household wealth is held in the base and middle segments, and satisfying the needs of these asset owners may well drive new trends in consumption, industry and finance. Brazil, China, Korea and Taiwan are countries that are already rising quickly through this part of the wealth pyramid, with Indonesia close behind and India growing fast from a low starting point.

To the World Bank and Credit Suisse reports we can add the public opinion findings of Barna, the religiously oriented marketing research firm. Despite the fact that “the percentage of people in the world who live in extreme poverty has decreased by more than half,” according to Barna, “more than eight in 10 Americans . . . are unaware global poverty has reduced so drastically. More than two-thirds . . . say they thought global poverty was on the rise over the past three decades.”

To be charitable, perhaps this is because analysts today (the New York Times columnist and Nobel laureate Paul Krugman, for example) tend to focus so intensely on inequality at the expense of actually examining poverty itself. Yet while the Pope, the Patriarch, the Dalai Lama, and others are right about the increase in inequality, they are wrong to conclude that this causes global poverty—the latter is demonstrably on the decline. And that, I would add, is a good thing.

That said, it is natural to ask, how can these two trends coexist? Might there be a connection? If so, what might it mean for those who seek to lend the moral weight of their religious office to assessing this state of affairs?

In order to explain the force of the rhetoric of inequality used by Nobel-winning analysts and world religious leaders alike, I here appeal to the work of Nassim Nicholas Taleb, who examines, among other things, the distribution of socioeconomic data in his 2007 bestseller The Black Swan.

Much of the problem, according to Taleb, comes from a mistaken intuition: People tend to assume that economic inequalities should naturally follow the distribution of the Gaussian “bell curve,” with extremes being so unlikely as to be nearly impossible.Thus, when most people hear that 86 percent of the world’s wealth is owned by the top 10 percent on the global income scale, their instincts tell them that such a number must not be normal—it must be an injustice. Clearly, the conventional wisdom teaches, the few have gained by oppressing the many.

Yet wealth, income, and other socioeconomic data are not Gaussian but scalable, with no clear limit to the possible extent of expansion. “J. K. Rowling, the author of the Harry Potter books,” writes Taleb, “does not have to write each book again every time someone wants to read it. But this is not so for the baker: he needs to bake every single piece of bread in order to satisfy each additional customer.” The labor required to produce Harry Potter books is scalable, that for baking cakes is not. Generally speaking, wealth production in modern economies is scalable; extremes are not unlikely, as they would be with the “normal distribution” bell curve associated with Carl Friedrich Gauss.

In the Gaussian framework, Taleb writes, “inequality decreases as the deviations get larger—caused by the increase in the rate of decrease. Not so with the scalable: inequality stays the same throughout.” Hence “the inequality among the superrich is the same as the inequality among the simply rich—it does not slow down.” This calls to mind the common Internet meme: “You thought the one percent was the problem? The real problem is the .01 percent!” That is to say, the inequality between the .01 percent and the one percent is, if you stop and think about it, comparable to that between the Occupy-stigmatized one percent and the Occupy-lionized 99 percent. However, given that income and wealth are not distributed in a Gaussian bell curve, we ought not to jump to conclusions about the morality of this unequal distribution. It follows a natural pattern—just not a bell-shaped one.

To the world of the Gaussian “normal distribution” bell curve, Taleb gives the inspired name “Mediocristan.” Data that follow the bell curve include individual heights, dice rolls, and coin flips. This model most often corresponds to the physical world and the world of organized gaming. In contrast, Taleb calls the world of the aggregate and the scalable, “Extremistan.” In Extremistan, distributions have no fixed limits. There, systems are vulnerable to what he calls Black Swan events—the unexpected and unknown, but highly consequential.

The difference between expectations in Mediocristan and those in Extremistan cannot be overstated. “Consider this effect,” writes Taleb. “Take a random sample of any two people from the U.S. population who jointly earn $1 million per annum. What is the most likely breakdown of their respective incomes? In Mediocristan, the most likely combination is half a million each. In Extremistan it would be $50,000 and $950,000.”

In Extremistan, there is a recognition that Black Swans happen. Taleb made a fortune as a trader because he discarded Mediocristan thinking where such thinking was not appropriate. His success came from taking small daily losses for four years, betting against “safe-bet” options. The strategy worked because these options were only safe bets in a Gaussian world. Clinging to  Mediocristan expectations in an Extremistan environment can lead to disastrous results: Big, allegedly safe-bet companies, such as Pan American Airlines or Enron, sometimes fail. Even whole markets sometimes fail. In fact, Taleb is known for anticipating (which, he would emphasize, is not the same as predicting) the 2007 financial crash in The Black Swan just months before it happened.

If we lived in a Gaussian world, we would expect distributions of wealth to average out. But they don’t. That isn’t the world we live in. Thus the global inequalities of today proportionally correspond to the simultaneous increase in global wealth as a natural aspect of the modern economies capable of producing that wealth.

To try to have strictly Gaussian outcomes with all the benefits of modern society—including the tremendous reduction in global poverty noted by the World Bank and others—would be like trying to fit a square peg into a round hole. As Taleb writes, “I truly believe in the value of middleness and mediocrity—what humanist does not want to minimize the discrepancy between humans?” However, he adds, “My true problem is epistemological. Reality is not Mediocristan, so we should learn to live with it.”

Also to begin to grasp the “why” of it—and that will be the subject of my next post.

Is There a Technology Trap?

The categorical claim, made now by many alarmists, that “this time is different; jobs are gone forever” is no more plausible now than in the past.