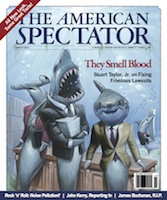 Stuart Taylor, Jr. has an interesting essay in the March American Spectator analyzing the rules of both federal and state courts that permit frivolous lawsuits to move forward by delegating to private individuals the governmental power to issue summons. As Taylor notes, “Anyone can, with little more than a court filing fee, require anyone else to respond to any charges—no matter how far-fetched—without even having a judge read them, let alone find them to be legitimate and in good faith.” The article quotes Donald Elliott, former Yale law professor, EPA general counsel, now a partner at Covington & Burlington, for his work on lawsuit abuses. Elliott notes that under the Federal Rules of Civil Procedure (FRCP) anyone who pays $350 to file a complaint can command you “by presenting a summons to the court clerk who must sign it—to “appear and defend” or face “a default judgment . . . for the relief demanded in the complaint.” This, Elliott observes, is a “strange departure from our usual approach of requiring safeguards against abuse of governmental power.”

Elliott’s solution is straight-forward: amend the federal rules to ensure that a defendant is summoned only when a judge who has reviewed the complaint, questioned the evidence, “determines it reasonable to require a response.” Of interest to me is that Elliott argues that something like this heightened judicial procedure for a prospective summons was once the rule. Judges once weighed evidence against the claims if only in a minimal capacity. Surely this set forward some kind of a workable clearing-price regime with regard to suits that tamped down legal harassment. The rule changed in 1938 when the FRCP eliminated this scrutiny and “handed over the government’s power to order people to respond to lawsuits to private plaintiffs with a financial interest in coercing settlements.” Of course, Elliott also notes that the filing of an answer to a complaint in 1938 involved little in the way of fees and expenses. We had not yet entered into that modern practice of the expensive, time-consuming lawsuit and discovery process. Pity.

I’m not sure if my reaction to Taylor’s interesting article on the causality of frivolous lawsuits adds or detracts from his analysis. For the record, Taylor attributes these lawsuits to both the rule change and the deep interest group politics of lawyers, plaintiff and defense-side. Both groups have virtually no interest in seeing things change from the current track. Stuart is probably correct on both counts. Up to a point, defense lawyers’ jeans are full regardless of the damage to their client’s business. Moreover, the rule surely feeds trial lawyer innovation: “the most entrepreneurial profession in America; their returns on investment are very high; and some court somewhere in this vast country is always open for their business.” However, the year of this rule change, 1938, is momentous for reasons beyond the cost of having to respond to a privately enforced complaint.

If you’ve been reading Michael Greve on this blog, you know that it’s the same year that the infamous Erie case was decided. I think Greve’s analysis (He is also pointing to a FRCP change), significantly adds to the causality analysis of the lawsuit problem that Taylor describes. Greve’s contention is that beyond being a personal injury case whose holding is that in “diversity cases,” federal courts will follow the rule of decision of the state where they sit (usually, the state where the case was filed), and not federal common law, Erie is a constitutional revolution. Greve’s argument is as follows:

The actual Constitution embodies a “competitive” federalism that disciplines government at all levels. The New Deal Constitution, by contrast, embodies a “cartel” federalism that empowers government at all levels. The central case in that transformation isn’t Carolene Products, or Steward Machine Co., or West Coast Hotel, or United States v. Darby, or even Wickard v. Filburn (which, to the horror of many of my friends, I believe to be rightly decided).  While the often appalling reasoning in those cases certainly reflects the constitutional New Deal’s cringe-inducing presumptions, one can live with the decisions and still have a sensible federal order. That is not true of Erie Railroad. Accept that case or any of its premises, arguments, and tenets,  and you’ve bought into a cartel federalism that erodes limited government, legal certainty, political responsibility, commerce, and any other virtue one might want to associate with federalism.

Class action practice is absurd because of Erie, according to Greve. “In this fashion, Erie transforms the Constitution’s commercial order into a trial lawyers’ bill of rights.” The unfortunate consequences for commerce are deep and plague even reform efforts of class action abuse:

For another thing, I do not understand why “diversity” cases of this sort—that is, cases among parties from different states—over millions of dollars are decided even in federal court under state law, meaning to all intents the law of a state that was handpicked by roving plaintiffs’ lawyers.  Or rather I understand that all too well: it’s the holding and the result of Erie Railroad (1938)—the baseline of all modern Civil Procedure and a lodestar for many soi disant originalists, but arguably the Supreme Court’s worst case ever. In its wisdom, the Congress that enacted CAFA [Class Action Fairness Act] explicitly left the Erie framework in place: it permits (some) diverse class action defendants to escape the bias of the local (hellhole) forum, but the parochial bias of state law will still accompany the defendants into federal court.

So, perhaps, Greve and Taylor’s analyses are complementary. The access points for litigation on interstate commerce were multiplied by allowing state law to determine federal court outcomes in diversity cases per Erie. But the same-year rule change, noted by Taylor, allowed ease of administration in ensuring that the suit you filed could then be privately enforced against a defendant, requiring him to make an appearance and defend against the complaint or settle. Sounds like the law of our interstate commerce.

The Rhetoric of Judicial Opinions