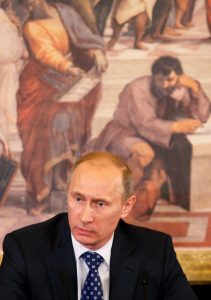 Which President advocated the following conservative notions in his State of the Union Address? Restoring local government, reviving charities, freeing business from regulation, denouncing the education bureaucracy, tightening the borders, and strengthening “the values of traditional families.”

Contrast this with a more progressive President whose State of the Union Address emphasized raising the salaries of academics and doctors; calling for frank discussion of race relations, declaring a “year of culture,” and increasing trust in the government—while never mentioning God.

In fact, these speeches were made by the same President, Vladimir Putin, in his State of the (ex-Soviet) Union address, December 12, 2013.

The Russian President (the seemingly right-friendly one) has gotten positive notice from some conservative commentators for acting to defend Christians in Syria and even more for Burkean arguments such as this: “This destruction of traditional values from above [by cultural elites] not only leads to negative consequences for society, but is also essentially anti-democratic, since it is carried out on the basis of abstract, speculative ideas, contrary to the will of the majority, which does not accept the changes occurring or the proposed revision of values.” In fact, Pat Buchanan wonders whether Putin is “one of us?”—namely, a paleoconservative. As Tonto said to the Lone Ranger, what you mean us, paleface?

Buchanan explains, “While much of American and Western media dismiss him as an authoritarian and reactionary, a throwback, Putin may be seeing the future with more clarity than Americans still caught up in a Cold War paradigm.” The galvanizing, cross-cultural issue for Buchanan is same-sex marriage. This revolutionary practice is the sign that “the American people have never been more alienated or more divided culturally, socially and morally…. We are two countries now.” Did he, like Bush 43, look into Putin’s soul? Might Vlad the Implier head a coalition of cultural conservatives among nations opposed to gay marriage? Yet Putin explicitly rejects the notion of Russia trying “to teach others how to live their lives.” He would decline a guest spot on “Duck Dynasty.”

It is not surprising for an old Lincoln-basher like Buchanan to make such an unprincipled argument. Neither is it any shock for Washington Post leftist columnist Harold Meyerson, who uses the opportunity to devise a slogan for Buchanan,“The Intolerant International Bigots of the world, unite.”

But the fundamental issue Buchanan raises, the decline of the West, has in fact been posed already by another Russian, who does not mention same-sex marriage. Thirty-five years ago Aleksandr Solzhenitsyn spoke of the ravages of modernity on the human soul in his Harvard commencement address. The shallowness and ultimately the barbarity of modern life have rarely been exposed in such uncompromising terms. But an even more appropriate Solzhenitsyn essay for considering Putin is his “Repentance and Self-Limitation in the Life of Nations,” from his 1974 book, From Under the Rubble. Contrary to dismissals of the essay as the product of a Slavic crank, this sermon to Russia and the world displays Solzhenitsyn’s art as the greatest writer of the 20th century. (For a thoughtful, lengthy study see Daniel Mahoney’s essay.)

Solzhenitsyn’s opening citation of St. Augustine—with its rarity of an Orthodox writer citing a western Christian—announces his ambition: “What is the state without justice? A band of robbers.” St. Augustine refers to the aching question that drives the exchanges in Plato’s Republic, whether justice can be more than an agreement among thieves. Solzhenitsyn’s essay is Platonic—in its comparison of an individual soul with a nation and, moreover, in the repentance they both need.

We know that individual repentance or conversion, the confession of one’s own sins, is difficult enough. “How then can we transfer to society and the nation that which does not exist on the individual level?” Solzhenitsyn insists that he is not making a religious demand on nations. In order to survive, nations need repentance—they need to discover that right makes might. Russia, for example, must recover the suffering soul it once had for centuries. Again, we see Solzhentisyn’s Platonism: For Plato too conversion (metanoia or periagoge) is the soul discovering its true self—just as a prisoner escapes the cave of shadows, turns around, and begins to see natural objects as they are.

The Platonic comparison and its consequences remind one of Abraham Lincoln’s plea, at the end of his Cooper Institute address, that Americans affirm their faith that right makes might. In his call for repentance, Solzhenitsyn is giving a Russian version of Lincoln’s Second Inaugural, with its interpretation of the Civil War as divine punishment and its call for repentance, love, and mercy.

Russia has much to repent, as does Germany, China, and every other nation. Indeed, “The scope of our repentance must be infinite. We cannot run away even from ancient sins.” Here he recalls Russia’s brutal treatment of Poland—and concluding from Poland’s various expansions that even the long-suffering Poles have much to repent of. “[W]e must all answer for everything.” And, he adds, we must all be ready to forgive.

Such a turning-around will lead individuals and nations to realize that “self-limitation comes into its own as the most natural principle to live by.” This means, contrary to Progressive ideology, that “infinite progress” and unlimited freedom are impossible.

For contemporary Russia, Solzhenitsyn insists on one particular way of healing its soul—knowing and moving to its true home, the Russian Northeast, that is, Siberia. While startling, this is no more bizarre than Crime and Punishment’s Raskolnikov repenting of his murders after exile there. The Russian state must undergo its own repentance. We should recall that Raskolnikov is prodded into confession through the grilling by a Socratic detective. (For a contrary view of Raskolnikov as precursor of Lenin, see Harry V. Jaffa’s essay on three murders and the atrophying moral consciousness of the west (link no longer available).

We must then ask of Putin the question that Solzhenitsyn himself raised: What have you done to make Russia more penitent? This question brings us back to the “progressive” Putin who asks for more power and trust in him, this President for life. “Everything that has been stated here must be executed without any reservations, new suggestions or bureaucratic interpretations. This is what the authorities’ most important and most notable task consists in.” Indeed, Putin wants to make as the “motto” for the coming year, “if a decision has been made, then it must be implemented.” Franklin Roosevelt’s First Inaugural is scarcely more lacking in moderation. Putin is an effective despot who does not ignore the moral views of his people.

Rather than looking for leadership from such dubious characters, conservatives should turn instead to the most profound and the most spiritual Russians, such as Solzhenitsyn. Or they might even better rally around another international figure, a man at least as Catholic as Pat Buchanan, Pope Francis.

Government by Emergency: Are Two Generations of Crisis Enough?

The oldest emergency proclamation dates to the Carter Administration, 40 years ago. Two generations of crisis are enough.

Politics Anchored in the Past v. Politics Oriented Toward the Future