What would you think of capitalism if you were born in a country that had developed a market economy by the dawn of the 20th Century and was ranked among the ten wealthiest nations per capita in the world—but one hundred years later had dropped to seventieth with little of that wealth having trickled down to the poorest in society? Such was Pope Francis’ experience with capitalism in Argentina and his pastoral letter Evangelii Gaudium cannot be understood without it. We all begin with our culture and his would discourage anyone, especially someone so moved by concern for the poor.

Argentina was the “wild west” even within the Spanish colonial empire and was not even recognized politically until 1776 when Buenos Aires became an official port with a rich agriculture developing around it. When Napoleon deposed the Spanish king, independence was declared in 1810 and Argentina’s powers immediately went to civil war with each other for the next fifty years. A classical liberal government and Constitution were established in 1853 and revised in 1860 with many changes in power and fortunes but not in fundamentals. As an agricultural oligarchy with a major port and developing industry, free trade was the norm and central government controls were light. As Jose Ignatio Garcia Hamilton has noted, even with much political instability, by 1910 these policies made Argentina’s per capita Gross Domestic Product number ten in the world, higher than France, twice Italy’s and five times Japan’s. 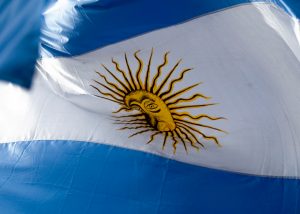 This prosperity attracted a large European immigration, with 30 percent of Argentineans foreign born by 1930, 80 percent Italian and Spanish. While providing the labor for its growing manufacturing these also brought the fascist and communist ideologies of the home nations to the inevitable industrial clashes between the new capitalists (many from landed families) and a muscular unionism, which spread to the feudal agriculture of the Pampas adding fuel to the existing grudges between the aristocratic factions. Military coups in 1930 and 1943 promised order and led to the long influence of Juan Peron, who removed the Supreme Court, politicized the education system, nationalized industries, controlled agricultural prices and distribution, established an export monopoly favoring both unions and businessmen in a generally syndicalist regulatory environment, and vastly increased spending for client groups that produced enormous debt. Other factions had intervals of power until another coup in 1976, the Falklands War, disgrace and a democratic government in 1983. Market reforms were adopted under Carlos Menem in the 1990s but social spending and large debt continued, ending in corruption, eventual currency devaluation and unpopular austerity programs, culminating in the restoration of more traditional Peronist policies and even slower growth under the Kirchners up until today.

This is the context within which Francis’ social teaching in Evangelii Gaudium can be understood. He starts by observing that “The majority of our contemporaries are barely living from day to day” enveloped in a “crisis of inequality” with an income gap growing “exponentially.” In the face of this, “some people continue to defend trickle-down theories which assume that economic growth, encouraged by a free market, will inevitably succeed in bringing about greater justice and inclusiveness in the world. This opinion, which has never been confirmed by the facts, expresses a crude and naïve trust in the goodness of those wielding economic power and in the sacralized workings of the prevailing economic system. Meanwhile, the excluded are still waiting as a “culture of prosperity deadens” the fortunate to the sufferings of the many.

“The gap separating the majority from the prosperity enjoyed by those happy few” is “the result of ideologies which defend the absolute autonomy of the marketplace and financial speculation. Consequently, they reject the right of states, charged with vigilance for the common good, to exercise any form of control.” A “deified market is the only rule.” For “as long as the problems of the poor are not radically resolved by rejecting the absolute autonomy of markets and financial speculation, and by attacking the structural causes of inequality, no solution will be found for the world’s problems or, for that matter, to any problems. Inequality is the root of social ills.” Today, “we can no longer trust in the unseen forces and the invisible hand of the market. Growth in justice requires more than economic growth, while presupposing such growth: it requires decisions, programmes, mechanisms and processes specifically geared to a better distribution of income, the creation of sources of employment and an integral promotion of the poor which goes beyond a simple welfare mentality.”

Francis uses very strong language although his economic analysis is merely a dozen paragraphs of 288 long sections that promote “a fraternal love capable of seeing the sacred grandeur of our neighbor, of finding God in every human being, of tolerating the nuisances of life in common by clinging to the love of God, of opening the heart to divine love and seeking the happiness of others just as their heavenly Father does.” His is only tangentially an economic document as can be appreciated in a following interview with the Italian daily La Stampa defending his criticism of “trickle-down” economics when he responded that he “did not talk as a specialist but according to the social doctrine of the church.” Francis’ complaint is against those “wielding economic power” for their lack of charity and justice, even stating elsewhere that if he sees a businessman he thinks is unjust to his workers at communion he maneuvers an assistant to exercise the sacrament (Jorge Mario Bergoglio and Abraham Skorka, On Heaven and Earth: 64).

But who wields this “economic power”? In Argentina, Peron created what was perhaps the first comprehensive welfare state, trading benefits to the masses for their political support. Since there never were enough funds for everyone, a state capitalism under strong political regulation was developed to direct benefits to powerful clients such as unions and producers without so fettering the businesses as to deprive him of the wealth needed to support his regime. Under Argentina’s many forms of repressive government, capitalists could only survive by being political partners of the state, sometimes its power behind the throne but more often too powerful to eliminate but clearly having to defer to state power to remain in business. In the U.S. this is called “crony capitalism” where the capitalists are in collusion with the government to get favors for themselves, precisely the opposite of a market.

But there is no such thing as “the absolute autonomy of the market” either. All markets are based upon rules of law that set their basic shape with the goal of being fair enough to encourage trading. The man most responsible for the modern capitalist revival, Nobel Laureate F.A. Hayek, himself wrote back in the nineteen sixties that there was no such thing as unbridled laissez faire. The U.S., one of the freer countries, has 300,000 regulations. The economic problem of welfare states is too many regulations so that budding entrepreneurs are denied entry to the market, not that there are autonomous markets. Second, there is substantial redistribution: in the U.S. the top one percent earned one-fifth of the income but paid two-fifths of the income taxes and its government redistributes 40 percent of total wealth (but mostly to the middle classes rather than the poor). Third, as Brookings Institute scholars Laurence Chandy and Geoffrey Gerz estimate, between 2005 and 2010 the total number of poor in the world actually fell by half a billion people, after India, China and others adopted more market-oriented reforms. While not a panacea, trickle down has lifted millions where market practices have been adopted.

But by 2012 Argentina’s comprehensive welfare state had sunk to number 73 in world per capita GDP by World Bank estimates, at Int$12,043, down to only one-third that of France. Its ratio of the top ten percent richest to the bottom ten percent poorest was 31.6 to one (compared to half, 15.9 to one, in the U.S.). With all of Argentina’s government control the result has been a much poorer country and larger inequality than the capitalist U.S. Francis might respond that market reforms were instituted in Argentina in the 1990s and things got worse for the poor. Yet, the numbers show they did work for a while as all three parties in the following election ran as pro market. In the end, Argentina could not defeat the crony capitalist/union corruption nor meet public welfare expectations nor control the enormous debt that still hobble it today.

Francis’ capitalism is indeed unjust. But it is caricature, useful for making points but distortion nonetheless. In another place he says “wild capitalism” and communism must be condemned with “the same vigor” (OHAE: 160), really, with the latter killing 100 million of its own people? Adam Smith, the inventor of the “invisible hand” analogy, would agree Francis’ capitalism is unjust since Smith insisted upon the necessity of charity and even local welfare. Today’s reality is the over-regulatory welfare state, not wild markets, which Francis implicitly recognized by saying now we must go beyond “a simple welfare mentality.” He argued that the “great temptation” in aiding the poor “is falling into an attitude of protective paternalism that does not allow them to grow” (OHAE: 169). He understands the benefits of decentralization for the church and recognizes the need for subsidiarity but he despairs that it is becoming “difficult to find local solutions.” He concedes that business can be a “noble vocation” in creating jobs but he simply presupposes growth, which is the economic justification for the market.

My 1978 book Does Freedom Work? critiqued Paul VI’s encyclical Populorum Progresso and argued his morality was sound but his empirical understanding of economics was not. Popes are not infallible on empirical matters and the book presented hope that a future pope could understand them. And then there were John Paul II and Benedict who looked deeply into the market. John Paul lived under communism and was required to ask why capitalism had produced the sounder society. Benedict lived under Nazism and was forced to consider the other major economic systems. Sufficient study could not fail to notice the obvious, that capitalism worked better and reduced world poverty. They even questioned the welfare state for “its bureaucratic way of thinking” rather than “concern for serving its clients” and proposed decentralization and “perceiving the deeper human need” instead (Centesimus Annus: 48), placing much of this sounder reasoning into their encyclicals and their updated Catechism.

Francis specifically said he was speaking only as a pastor, one who accepted the church’s teachings. Evangelii Gaudium was merely “pastoral advice.” Would anyone have listened if he was as balanced as were his predecessors in their thoughtful official doctrines? He correctly explained that prosperity can breed indifference, can lead to mindless commercialism, prurient escapism and neglect of neighbor and it was time for a worldwide wake-up call. It worked. Francis’ uninhibited passion for the human dignity of every person is essential in forcing us to face the higher challenge. But his admitted lack of interest in technical matters about markets and governance, that the market is a necessary although not sufficient condition for a humane social life, can have horrendous consequences in denying the poor the opportunity to rise from the squalor enforced by a too often rapacious and bureaucratic welfare state.

Show Me the Way to Poverty