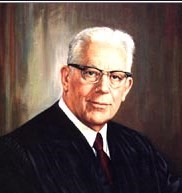 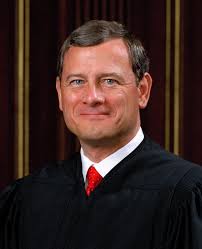 A few months ago, Justice Ruth Bader Ginsburg explained why she needed to stay on the Court in part by claiming “if it’s measured in terms of readiness to overturn legislation, this is one of the most activist courts in history.” Justice Ginsburg was needed to help lead the dissenters and push back against judicial activism. It is a nice story, but has little relation to the truth. In fact, the Roberts Court has a credible claim to being the least activist Court in the history of the United States.

“Judicial activism” is mostly a smear word in political rhetoric, and it is hard to know what content to assign to its use. Scholars have traced the myriad ways that “judicial activism” has been used over time and by different speakers, and there is little doubt that the complaint is a moving target. To the extent that it means something like “the judges got the law wrong,” then it doesn’t tell us much beyond the fact that the speaker disagrees with the Court. It would be more interesting to cut to the chase and explain where the judges went astray rather than simply describing them as activists.

Empirical scholars of the courts have generally been more specific by what they mean by the phrase judicial activism, and their usage links up to at least a major component of more popular usage and can tell us something useful about how courts behave (laying aside whatever normative judgments we might want to make about that behavior). Within that literature, activism simply means how often courts strike down laws as unconstitutional. Active courts strike down laws often; passive courts rarely strike down laws. Justice Ginsburg seems to have something like this in mind as well. By itself, such a statistic tells us nothing about why the Court is striking down laws or whether those actions are justified, but it at least provides a useful starting point for thinking about the Court.

There are other caveats to add. What counts as an instance of invalidating a statute (a surprisingly slippery concept)? How can we make comparisons across different contexts, given changes to jurisdiction, caseload, legislative productivity, etc.? But I’ll leap over all that here. For those who are particularly interested, you can check out a forthcoming article here or await a book-length discussion of the history of judicial review of federal laws that should come out next year with the fine (and very patient) folks at the University Press of Kansas.

But this figure provides some food for thought. 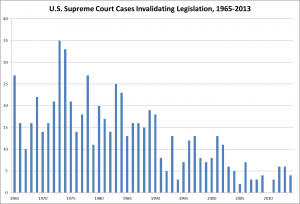 The figure shows the total number of cases per year in which the U.S. Supreme Court struck down or constitutionally limited the application of a statute from 1965 to 2013, from roughly the start of the most meaningful years of the Warren Court through the Roberts Court. There’s an obvious break in the pattern. Starting roughly when the U.S. Supreme Court gained a solid Reagan-era conservative majority with the appointment of Justice Clarence Thomas in 1991, the Court has exercised the power of judicial review to strike down laws as a lower and lower rate.

On average, the Roberts Court has struck down laws in about four cases per year. By contrast, the Burger Court struck down laws at a clip of about 20 cases per year. If you were to take into account the general propensity of the Court to strike down laws (the Roberts Court is operating in an era defined by the Warren and Burger Courts, not the Marshall and Taney Courts) and legislative productivity (there are a lot more legislatures producing a lot more law these days than in the early nineteenth century), the Supreme Court is now shockingly restrained.

So, Justice Ginsburg has the situation almost precisely backwards. In terms of its demonstrated willingness to overturn legislation, this Court is perhaps the least activist U.S. Supreme Court – ever. No doubt she is right at another level. She does say “readiness to overturn legislation,” and it does seem quite likely that the current justices are full of self-confidence when it comes to exercising the power of judicial review. From Ginsburg to Thomas, these justices are the heirs of more than a century of robust judicial activism and a growing scope to the exercise of judicial review. The justices are routinely lobbied from both the left and the right to act aggressively to strike down disfavored laws, and we are many years removed from any serious political threat to the institutional integrity of the Court. These justices are more than willing to wade into political thickets and start hacking away.

But the key point is that they generally don’t. For decades, the justices have been willing to tackle political problems, no matter how large or divisive. The current justices are not particularly special in that regard. They are special, however, in their relative lack of activity. They strike down laws on occasion, and sometimes important laws, but for the most part they are willing to let the political players play. If Chief Justice John Roberts is a referee, he has put his whistle firmly in his pocket (I’m more of a football fan than a baseball fan, so I hope you’ll forgive me tweaking the much maligned analogy).

If we were to unpack the cases in which the Court has declared that a legislature has violated the constitutional rules, we would find that the most dramatic decrease has come with the review of state laws. The Court continues to hem in Congress at a rate that is somewhat comparable to its twentieth century norm, but the justices have been remarkably restrained when it comes to reviewing the actions of state legislatures. More often than not, it is Justice Ginsburg and her ideological colleagues who are pressing most aggressively for the Court to strike down more state laws, but a conservative majority has been unwilling to do so.  If Justice Kennedy were to behave more like Justice Alito, the Court could very nearly hang up a “gone fishing” sign.

The state governments have been given a free rein by the modern, conservative Supreme Court. Whether you think that is a good thing or a bad thing depends on how good of a job you think the states are doing in adhering to the constitutional rules or how innovative you think the Court ought to be in developing new rules to limit government officials. I’m sure Justice Ginsburg has her own opinions about that. But as they say, we are entitled to our own opinions but not to our own facts. And the fact is that the Roberts Court is very far indeed from being the most activist Court in history.

The Least Democratic Branch Is Neither the Senate nor the Courts

Electoral accountability of the executive branch is the reason the Constitution vests executive power in an elected president in the first place.

The Constitutional Work Before Us