Editor’s Note: This essay is part of Advanced Manufacturing: A Law and Liberty Symposium

One must give William B. Bonvillian and Peter L. Singer a certain amount of credit for writing Advanced Manufacturing: The New American Innovation Policies. In it they accomplish a rare economic trifecta: They mischaracterize the symptoms of a problem, misdiagnose the underlying “disease,” and then botch the prescription for a cure. On the other hand, they are making an argument that most Americans believe, and the solution they offer is one that many politicians favor, so the book should be taken seriously.

The book addresses the “decline of manufacturing,” toward which the authors take a now-standard line of collapse and crisis. But one might object that the starting premise is mistaken, because there has been no decline in manufacturing. When you get down in the weeds, you see that what we really have is a decline in the rate of growth of manufacturing. Seriously, the problem is that manufacturing isn’t growing as fast as the authors think it should, not that it’s shrinking. Manufacturing is by far the largest sector of the U.S. economy, accounting for more than $6 trillion in new value. Further, the value of products manufactured in the United States  has more than doubled since 1974, the year many people use to date the beginning of the “great manufacturing decline.”

As you can see from Table 1, there has been a flattening of manufacturing output, and the Great Recession of late 2007 to 2009 did indeed do a lot of damage. But to call this a “decline in manufacturing” is just a mischaracterization of basic facts. Manufacturing has continued to grow at something quite close to its long-run trend growth rate, between 1.5 percent and 2 percent per year.

Further, as Table 2 (from a Congressional Research Service report released early this year) shows, even making the comparison on total size alone, the United States continues to stand out. U.S. total manufacturing is still larger than the next three economies—Japan, Germany, and South Korea—combined. It is simply not true that American manufacturing is declining.

The authors also make a criticism regarding the slow growth of U.S. productivity. But growth can be misleading due to the “index number” problem. According to the Organization for Economic Cooperation and Development, the United States is one of the top six most productive economies, with output of more than $70 per hour worked. If productivity increases by $1 per hour, that’s only a 1.4 percent increase. China has less than one-fifth that level of productivity; a $1 increase is 7 percent growth. Further, China’s growth and productivity “miracle” seems to be foundering. 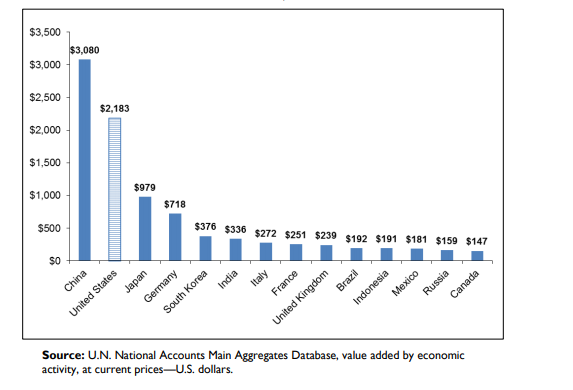 Make no mistake, there has a been a dramatic decline in manufacturing employment in this country, particularly as a proportion of the total U.S. work force. Some of this results from increases in productivity, but it is also true that many of the products Americans now use were made elsewhere and shipped here. America, facing the “make or buy” decision in dozens of industries, has found that “buy” is cheaper—often much cheaper. The economist David Autor, otherwise solidly a free trader, has concluded that there is something different about the current slump in manufacturing, which he and coauthors David Dorn and Gordon H. Hanson have called “The China Shock.”

So, let’s say for the sake of argument that there is a problem, and that the decline in manufacturing employment is something to worry about. In my recent book Tomorrow 3.0, I claimed that there is a general long-term trend in the direction of less manufacturing, at least of durable items. To call something a “problem,” however, is to go much further, since it means “we” believe that some political solution is required. If there’s a problem, we have to do something. Worse, the idea that we are somehow losing to China suggests that we should try to be more like China—which would mean centralizing industrial planning and giving government more control over the direction of investment growth and expansion of capacity.

It seems there is always some other nation that we should be more “like.” In 1988, I had the chance to interview for a position at a top U.S. business school, an Ivy League university. During the interview, one of the faculty asked me how I would integrate into my courses teaching about “being more like Japan.” We don’t need to be more like Japan, I politely (or perhaps not so politely) responded. That nation, I said, is on a path to economic stagnation. Its leaders’ taste for centralized planning, and the problems with its financial system, combined with the enormous debt the Japanese are building up with a purely export-oriented growth strategy, are going to lead to disaster, I wound up.

There was a long, shocked, silence.

Of course, I didn’t get the job—because everyone knew that planning and government investment were the keys to growth. At the time I made my prediction, Japan was growing at a 10 percent annual rate. Within five years its economy had tanked and nobody wanted to be “like” Japan anymore.

The idea itself has not gone away—that is, that the United States can centralize, direct, and plan its way to higher growth and the restoration of manufacturing to its economic pride of place as the dominant animator of GDP growth. Bonvillian and Singer diagnose the problems America  faces as a combination of market imperfections and system failures. The “market imperfections” include 1) network economy problems; 2) split incentives (essentially, positive externalities, where the benefits to new technology can be fully captured by the innovators); and 3) governmental institutional problems, that is, what the authors see as a lack of political will, with government “unprepared to take on the public-private organization of an innovation challenge of the complexity of a major sector such as manufacturing.”

That last one is impressive. Bonvillian and Singer believe it is quite obvious what should be done; all that’s required is a government willing to do it. Perhaps there’s still time to be more “like Japan,” after all.

They also present what they claim are the five “basic models” of innovation, derived from an earlier book that Bonvillian coauthored with Charles Weiss. Bonvillian argues, in that 2015 work, in the current work with Singer, and in other places, that economists don’t have a very good handle on innovation, where it comes from, and how it affects the economy. He is absolutely right about that, of course. But the crude cladistical set of categories of “types” of innovation and the associated means of spurring new processes is not a step forward.

The “pipeline” model, in which invention derives from an intentional “push” by government, is politically hard to sustain and economically hard to justify. So is the “induced innovation” model, where a firm or entrepreneur sees an opportunity or potential connection and creates a new product or process, after raising capital from people willing to take a risk. This kind of innovation may take place within an existing firm (though “legacy” firms may have trouble changing directions), or in a new economic entity that matures and becomes a firm.

According to the authors, the chief problem we face is a lack of another type of innovation, namely the “manufacturing-led” variety. These are

innovations in production technologies, process, and products that emerge from expertise informed by experience in manufacturing. This is augmented by applied research and development that is integrated with the production process. It is typically industry led but often with strong government industrial support. While countries such as Germany, Japan, Taiwan, Korea and now China have organized their economies around ‘manufacturing-led’ innovation systems, the United Stats in the postwar period has not. It is a major gap in the U.S. innovation system.

Bonvillian and Singer conclude that there is an “innovation irony” taking place even among the successful nations such as Taiwan, Korea, and Japan (always Japan, as if it were a success): these nations “now see that this must be complemented by stronger front-end, Research and Development-based innovation.”

Yet they adduce very little evidence here that would support the notion that having political leaders take a central role in dictating the directions of investment and innovation would do anything other than expand the corrupt, pork-barrel allocation of contracts that now hamstrings  our defense-procurement process. Even if it were true that an omniscient bureaucrat could divine the best future technologies for innovative investment, there is no reason to expect that actual political incentives would lead elected officials to act on that information. Oh and by the way, the information doesn’t actually exist.

The central prescription for the problems the book seeks to identify and diagnose is “new production paradigms.” The examples listed include the use of steam power in England, and the “quality” revolution led by Edward Deming in . . . you guessed it, Japan. This is simply sampling on the dependent variable. Given all the failed attempts at industrial planning—Japan’s MITI ordered Honda to stop making cars, to preserve economies of scale for Nissan and Toyota, and was only thwarted by Honda’s unwillingness to give in to government orders—this kind of top-down innovation has left a record that is dreary and unencouraging.

It should be said that a number of the issues highlighted by Advanced Manufacturing are real and deserve close attention. The core claim of the book, that mainstream economics has botched its understanding of innovation and failed to make a serious effort even to understand the importance of innovation in fostering growth, is spot on. Further, the related but distinct problems that figure prominently here—network economies and scale-up barriers—are central to the question of how to preserve a dynamic economy.

When all is said and done, I learned a great deal, both in terms of history and industrial organization, from this book. While I have been critical of what I see as its credulous acceptance of an idealized conception of the “state,” Advanced Manufacturing has much to recommend it.

Bonvillain and Singer mischaracterize the symptoms of a problem, misdiagnose the underlying “disease,” and then botch the prescription for a cure.

The Cause and Mechanisms of American De-Industrialization

Understanding De-Industrialization means looking at indirect causes like the place of the U.S. Dollar in the global economy.

Keep Calm and Self-Govern On

Today’s denigration of democracy is unbecoming and unwise, but so too is our elite's apocalyptic thinking.

Inequality Is Declining in Developing Nations and Will Decline in the West, Too