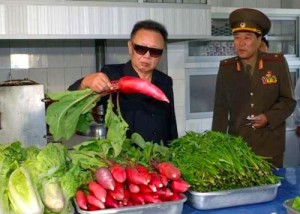 No tourist, I think, ever said ‘If it’s Tuesday, this must be North Korea;’ for whatever else might be said about that country, it is certainly distinctive. Whoever has been there, as I have, is unlikely ever to forget it; indeed he is also likely, from a combination of continued horror and fascination, to buy books about it whenever they appear. Fortunately this is not a great call on anyone’s income.

Recently in Paris I came across a volume entitled (in English, though the book was published in France) Kim Jong Il Looking at Things. It consists of a series of photographs, taken from the official North Korean news agency, of the late Dear Leader on his tours of inspection of his country, examining close-up its agricultural produce and its industrial products. The pictures come with lapidary captions, always in the form of ‘Kim Jong Il looking at x’ or ‘Kim Jong Il looking at y.’

The idea to put these photographs together was that of an art director of a Portuguese advertising company, João Rocha. He put them first on a website that is said in the book, in that inelegant but expressive phrase, to have ‘gone viral.’ It was a clever and original idea, and well worth consecration in book form.

In the pictures Kim Jong Il examines such objects as a red plastic bucket, a pencil, a cucumber and a radish. Accompanying him are obsequious and in some cases fearful directors of factories, farms and so forth, always with clear gestures or postures of social inferiority to the Dear Leader. In the party accompanying him are almost always men with notebooks, taking down the immortal words of wisdom that fall, ex officio as it were, from his lips; quite often the men accompanying him are senior military officers, wearing those Soviet-style peaked caps that often dwarf those who wear them.

The photographs are not arranged in any chronological order and it is clear to me that at some time before his death the Dear Leader had had a left-sided stroke, not surprisingly as he was a diabetic. His left arm hangs limply, atrophied but with the back of his hand slightly oedematous, by his side; sometimes he holds the left with his right hand just as hemiplegics often do. The fingers of the left hand are permanently flexed as after a stroke, and when he picks something up he uses his right hand only even when it would have been more normal to use both hands. Holding some tomatoes on the vine, for example, his left arm hangs useless, while one of those present obsequiously helps him with his own hand to keep them up. His facial expression is often vacant or slightly puzzled (though with a touch of malignity), as if he were suffering from cognitive defect, which again would not be medically surprising. He looks at his happiest when examining a bottle of North Korean vodka, fresh off the production line.

At the end of the book is an essay by Marco Bohr, described as a photographer, academic and writer on visual culture who lives in London. He received his doctorate in 2011, which means, I suppose, that he is about 30 years old: that is to say he came to adulthood well after the removal of the Berlin Wall. Perhaps that explains the superficiality of his essay, despite its references to Freud (voyeurism), Bakhtin (the carnivalesque) and Barthes (the death of the author). What is absent is any kind of historical reference or perspective, which means that the author is ill-equipped to extract very much meaning from these photos.

Of course, he sees the satirical nature of the enterprise, the humor of repetitive banality and it implicit mockery of the pretensions of the Dear Leader who, though he has never grown a radish or indeed anything else, becomes a world expert on radish cultivation the moment he picks a radish up, his immortal thoughts on that subject being recorded by a much-decorated general to be used as precious guidance to the radish-growers of North Korea from here to eternity. But the author of the essay does not enter imaginatively into a world in which to laugh at such preposterous pretension would be to be sent (along with your entire family) to a labor camp with the strong possibility of dying there, and where on the contrary the most patent lies, completely at variance with daily experience, must be repeated with simulated enthusiasm, morning, noon and night, year after year, decade after decade, to the total exclusion of real opinion. The violence that this does to the mind could hardly be exceeded, as anyone with a little imagination would be able to deduce: to talk of Freud, Bakhtin and Barthes in these circumstances is not to illuminate but to obscure, to trivialize.

There are numerous precedents for artifacts of popular culture poking fun at evil. In the 1940 film The Great Dictator, Adolf Hitler was famously mocked by Charlie Chaplin who played a satirical character called Adenoid Hynkel also referred to aas ‘The Phooey’. This tradition of mocking and ridiculing fascists and dictators can be traced throughout the history of the camera…

What is striking here is that the author seems unaware (or if is aware suppresses the fact that) Kim Jong Il was not just a dictator, but a dictator of a particular genre, type and tradition. The author correctly and accurately describes the photo of Kim Jon Il ‘looking at wheat’:

In the photograph of Kim Jong Il looking at wheat for instance, the lower vantage point [to disguise his small stature] underlines his position as leader, looking forward, his gaze directed to the future, while everyone else (including the camera and by extension the viewer) is looking at him. The tragic irony in photographs of Kim Jong Il looking at his country’s agriculture is that chronic food shortages have caused millions of deaths in North Korea over the last two decades.

In other words, let them eat photographs! It does not occur to the author that such propaganda is not to persuade the population that the regime is capable of feeding it well, but – by the very contradiction of the image with the reality, to which it must on no account draw attention, to humiliate it utterly and thereby passively accept its own chronic hunger.

It is curious that one whose field of study is ‘visual culture’ should seem to have no knowledge of modern iconography at all: but that is not his fault, rather it is a sad commentary on the state of the humanities in modern universities. 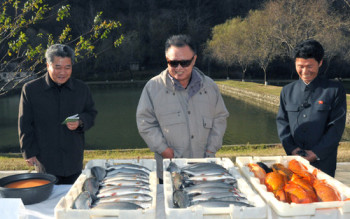 For it is perfectly obvious that ‘Kim Il Sung looking at wheat’ is not sui generis, that is to say without an iconographical tradition; on the contrary, it is totally derivative. The iconographic tradition of Communist dictators contemplating groaning plenty while the population goes short to the point of famine stretches back to Stalin stylistically and to Lenin conceptually. In how many Communist dictatorships have Dear Leaders surveyed the golden corn while their populations ate rat stew and grass soup? In how many Communist dictatorships have Dear Leaders inspected factories and provided on-the-spot-guidance, taken down in notebooks held by those leaning forward obsequiously to ensure that no word shall escape immortalization? I saw precisely the same iconography in Russia, Albania, Romania and North Korea, effortlessly and indeed unavoidably, and I am not an academic of ‘visual culture.’

Such lack of historical reference is no doubt a consequence of the culture of our time. The surfeit of information to which we are all subjected nowadays does not necessarily conduce to perspective, or even an awareness of a need for perspective. The barrage of information does not so much favor comparison as inhibit or prevent it. And it is hardly surprising that cultural references should change ever more rapidly.

I first became aware of this – I had no doubt been slow on the uptake – when an intelligent, cultivated and well-informed young man looked puzzled when I made reference to Papa Doc and asked me who he was. He had never so much as heard of him. Haiti has never been a center of world power or culture, of course, and yet the figure of François Duvalier once had a real presence in every reasonably well-informed or educated person’s mind, as did his Tontons Macoutes, such that when Graham Greene wrote his novel about Duvalier’s Haiti, The Comedians, he did not have to explain the context at all. Look on my, o ye mighty, and despair.

I was surprised (as I should not have been) that what was so present in my mind was completely absent from the mind of a young man who in most respects shared my interests. The world moves on, however; no one can or should expect that, with the exponential growth of information about the modern world, that the references in his own mind about what was modern in his youth should be shared by those considerably younger than he.

Still, it is shocking that in a book concerned with the iconography of North Korea an essay by an academic should appear that displays such historical amnesia. I felt as I read it that I was looking at the MRI-scan of a brain in which the grossest atrophy had taken place, the ventricles expanding at the expense of white and grey matter. I treasure the book for its pictures, but the essay is a powerful reminder that those who live in the eternal present moment, without any relevant sense of the past, are condemned to superficiality. They cannot even observe the present moment with any acuity.

A Bicentennial Reflection: The Effectual Truth of Marxism and Marx

Every student of politics and political philosophy must spend time with Marx, even if only to learn what to avoid.

Portrait of an artist as a young man, under Nazi and then communist rule.

Even a decade after his death, Aleksandr Solzhenitsyn remains one of the most misinterpreted writers of the 20th century.