One would hesitate, for the most obvious of reasons, to dispute astrophysics with a Nobel Prize-winning astrophysicist, but the case is quite otherwise with a Nobel prize-winning economist. This at the very least suggests a difference in the intellectual difficulty, rigor, or foundation of the two sciences. Common sense will not get you very far with black holes or antimatter, but in economics common sense is a necessary if not a sufficient quality in him who would think about it.

I therefore read with interest an article entitled “The Punishment Cure,” published on 9 December in the New York Times by the Nobel Prize-winning economist, Paul Krugman. It seemed to me entirely lacking in common sense, and to disregard considerations obvious to any intelligent person over the age of 15 or 16. In this I might, of course, be mistaken.

Let me begin by pointing out the author’s facile resort to abuse as if it were argument. In respect of a proposal to reduce the period during which the unemployed in America may claim unemployment benefits, Mr Krugman refers to the Republican’s ‘desire to punish the unemployed’ [my emphasis].

I have little doubt that there are some among Republicans who viscerally hate the poor and wish to visit suffering upon them in order to relieve their own feelings, just as there are some among the Democrats who see in the unemployed a permanent constituency for themselves. But in fact there is a legitimate debate to be had about how to reduce unemployment in a modern economy without at the same time introducing unsustainable costs or deformations into it. If it were easy, everyone would have done it by now. 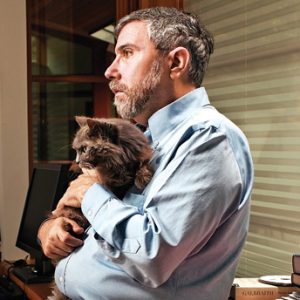 Mr Krugman takes the Republicans to task for believing that if unemployment benefits were more limited, more of the unemployed would find work from the sheer necessity to do so. This, he says, is fallacy. He writes:

Ask yourself how, exactly, ending unemployment benefits would create more jobs. It’s true that some of the currently unemployed, finding themselves even more desperate than before, might snatchaway jobs from those who already have them.

Now this passage seems to me to indicate that the model of an economy in the author’s mind is that of a static zero-sum game, in which one man’s job is another man’s unemployment and vice versa: the view of an economy that fueled the two disastrous totalitarianisms of the Twentieth Century, communism and Nazism. Furthermore (and very oddly for any economist, let alone one who won the Nobel Prize), Mr Krugman lives in a world without prices, for he says:

The point is that employment in today’s American economy is limited by demand, not supply. Demand and supply, then, live in some kind of Krugmanian Platonic universe, completely divorced from price.

It’s obvious that price is not the only determinant of demand. If I don’t like caviar, then halving of its price will not encourage me to go out and buy some. Whatever the price of alcohol, I shall never become an alcoholic. Reducing or stopping unemployment benefits will not affect neurosurgeons very much because most unemployed people are not neurosurgeons and can never be turned into such. Something more than mere availability for work is required of neurosurgeons.

If the price of labor, however, had nothing important to do with the number of jobs, how would Mr Krugman explain the outsourcing of jobs to countries such as China and India? It is not for reasons of climate that jobs once done in America or Europe have migrated to the other end of the earth. But in fact there are many conceivable jobs that the unemployed could perform in Europe and America if the price of their labor made it worthwhile for people to hire them to do those jobs. Forcing the wages of the unemployed down to that level might not be the right thing to do because there are many other things to be considered, but if unemployment is an evil independent of remuneration (which, within limits, it is), then reducing the incomes of the unemployed might not merely be what Mr Krugman calls ‘a perfect marriage of callousness… with bad economics.’

I hope readers will forgive me if I use my own country, Great Britain, as an illustration. Here I noticed something very odd and in my opinion disastrous in the long term. During the so-called boom years – actually asset inflation favored by a government that wanted to spend more without the politically unpopular need further to tax income – high rates of indigenous unemployment were maintained while the country sucked in almost equivalent numbers of foreigners to performed unskilled labor. Why?

First a couple of preliminaries. The official unemployment figures did decrease: but the slack (if I may be allowed a slight pun) was taken up by the allegedly ill, of whom very few were actually ill. They were unemployed, not sick, but being certified as sick meant that they could claim benefits for ever and the government to claim that unemployment was at such a low level that foreign labor was required by the booming economy. And this undoubtedly did serve the electoral purposes of the government in office, and made it very electorally difficult for any subsequent government to reverse or change the policy, at least radically.

So while millions were kept in subsidized idleness, millions were imported to do the work that the idle millions might have done. In part this was because the foreigners were better workers. Though their education might have cost a fraction of what a British education cost, they were often much better educated. Their attitude to work was much better, and it was much better because the incentive for them to work was much stronger. Though they occupied the lower economic rungs, they compared their wages with what they would have earned had they not come, not with what they would have received for doing nothing at all, which is the comparison the British unemployed made.

There were other factors too. The indigenous unemployed received non-transferable housing subsidies that in effect trapped them where they were, but from the crudely economic point of view were beneficial to them. They would not give these up merely to work for a wage that might leave them hardly any better, or even worse, off.

Britain is a very small country but it has some surprisingly remote corners that are difficult of access. One of them is the island of Sark in the English Channel. Sark is tiny, it has no motor traffic and its population is about 500. It is easier to reach Australia from most of Britain that it is to reach Sark. There are no flights there, and to reach it you have first to go to Jersey or Guernsey and then take a boat, which can be canceled for days or even weeks at a time because of the weather. (Sark, incidentally, is of heart-breaking beauty.)

When I went to Sark I found a small construction site where Poles were doing the unskilled labor with not a British laborer anywhere to be seen. How come Poles could get to Sark, but none of the several million unemployed Britons (among them the 20 per cent plus of people younger than 25 without a job, concentrated mainly among the uneducated and unskilled, precisely those most suited to the work)? Did it really have nothing to do with the fact that the Poles considered it advantageous to work there but Britons did not, and that the Britons did not because the economic difference for them between working and not working was so slight, or even weighted on the side of not working? This would seem to be the view of our Nobel Prize-winning economist.

There are arguments I have heard against the complete flexibility in a labor market. The French labor market is even more rigid than the British, and social charges on labor are much greater, but France produces slightly more if anything than Britain, using 25 per cent less labor time. The extreme difficulty of getting rid of a worker in France encourages French employers to make sure that a worker is as productive as possible, for example by training and re-training him, while in Britain his counterpart remains by comparison a mere hewer of wood and drawer of water. But French employers are not encouraged to employ people in the first place, which is one of the reasons why so many young French have moved to Britain where relatively easy firing leads to relatively easy hiring. London is now one of the largest French-speaking cities in the world.

Mr Krugman’s argument is not the argument in favor of labor market rigidity as above, however. He is what one might call a slice-of-cake man, where an economy is a cake to be sliced rather than a dynamic organism to be nurtured, and where supply and demand can be managed without reference to price. There may be cruder economic ideas, but I don’t know what they are. He is also, of course, a proponent of ever-greater government stimuli to the economy. In this article, he quotes John Maynard Keynes on the dangerous influence of ideas. I wish he had quoted Keynes’ eloquent words on the effects, social, psychological and economic, on the debauchment of the currency.

The Standardized Test as Tocquevillian Device

Tariffs and the Politics of Bizarro World

One knows it’s a strange, new political world in the US when Paul Krugman attacks a Republican President from the right on the subject of tariffs.