When I was a student, my friends and I would stay up all night to discuss such questions as the truth or otherwise of determinism. Was the entire future of the universe immanent in its past, indeed had everything been determined from the very foundation of the universe (if it had one)? If so, what of our supposed freedom?

We discussed such questions as if much depended on the answers we gave to them— youth is a time not so much of idealism as of self-importance—and in my case I came to the conclusion that a thoroughgoing determinism changed nothing. The fact was that, irrespective of the truth or falsity of determinism, we had to live as if we were free and as if determinism were false. When we came to a junction in a road we could not just sit there in the hope that the decision whether to turn right or left would come of itself, as a natural consequence of the previous 15 billion years of the universe’s history. We had to think about it and our conscious reflections made a difference. If they did not, for what reason or purpose had consciousness evolved?

Another of our nocturnal questions was that of egoism. To what extent was Man motivated purely by his own interests, all talk of ethics being a smokescreen to disguise from himself and others the selfishness of his own motives? As young people, we had special insight into egoism—we were like the anthropologists when they use their method known as participant observation—but we were mainly interested in theory rather than in practice. Marxism, with its talk of class interests, according to which all members of a certain class had the same interests and therefore the same ethical ideas, was l’air du temps.

Some of us mistook cynicism for sophistication, a perpetual temptation for the young, and it was all too easy to make universal egoism true by definition. All you had to do was take any apparently altruistic act and claim that it was performed really to win applause or to avoid the discomfort of guilt. The liberating consequences of this doctrine were evident: If all actions whatsoever were egoistic, then they were all equal and it did not matter what we did.

Philosophy is for most of us a kind of childhood or adolescent infectious disease which, once gone through, like measles, immunizes for life. For some people, though, it is more like chickenpox, whose virus may lurk dormant in the system for years only to break out many years later when the body is vulnerable for one reason or another. I think I belong to the latter kind of person.

My philosophical nights came back to me when I read an article in Le Monde entitled, “Beyond Egotism.” It was written by a French philosopher, Jean-Pierre Dupuy, working at Stanford. It seemed to me full of interesting error, and made me nostalgic for those days when the elimination of error seemed to us more important than a good night’s sleep.

The author’s view of a market society is typical of the common French characterization of what they frequently call “savage liberalism,” that is to say of capitalism red in tooth and claw. They take utter egoistic unscrupulousness as being its principal distinguishing feature, justified by the doctrine that: 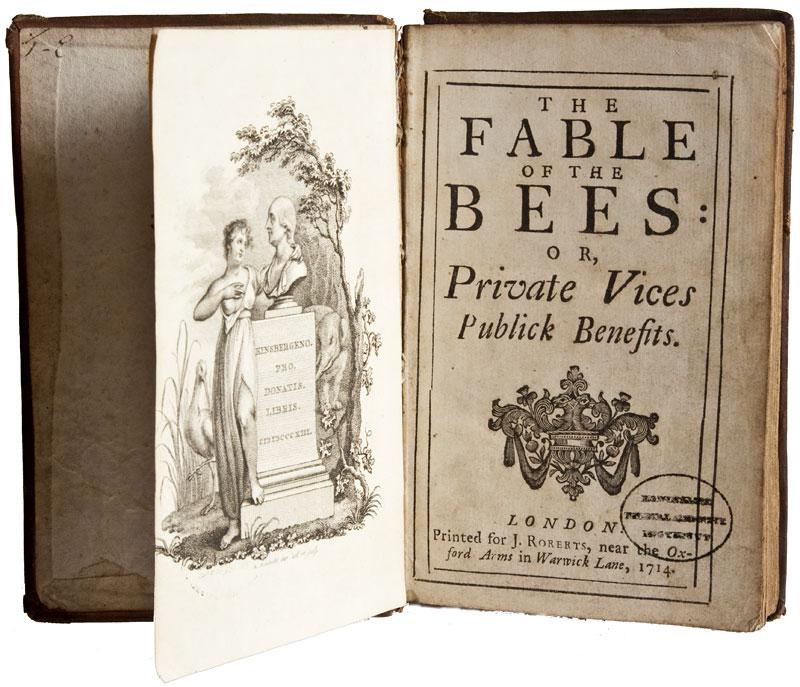 It is the unleashing of bad sentiments born of rivalry – envy, hatred, resentment – that gives an incredible energy to the [economic] system and, by creating abundance, makes everyone happy. This thesis, first enunciated by Bernard Mandeville and criticised but adopted by Adam Smith, was later attenuated in the Nineteenth Century by the notion of perfect competition. In the Twentieth Century, Milton Friedman . . . wrote that the market had this that was marvellous, that it worked “without it being necessary that people should speak to or love one another.”

And the author goes on to say:

This utopia of a society in which indifference and self-centredness would be the best guarantee of the common good is so monstrous that one says to oneself that only a very strong motive could make highly intelligent people believe it.

But does anyone believe it, at least as here described? Mandeville, it seems to me, was an agent provocateur, an intellectual gadfly more than an ideologist, who put forward an extreme version of a valuable idea in order that any notice at all should be taken of it. Judicious enunciations of audacious ideas of wide but not unlimited application seldom make much noise in the world; it is necessary to provoke in order to be heard, and this was as true in the first half of the 18th century as it is today.

Adam Smith was certainly not a red-in-tooth-and-claw man, neither personally nor doctrinally. He had a rather sunny view of human nature, believing that people had a natural sympathy for one another and indeed often acted against their own immediate and selfish interests. People’s sympathy for one another was so obvious for him, so common and universal an experience, that he said it didn’t need proof of existence.

And the quotation from Milton Friedman most decidedly does not make a utopia of a society in which people do not talk to or love one another. This is surely a wilful misunderstanding of the passage of precisely the kind that makes one wonder if a “very strong motive”is at work.

Smith does not say that his famous butcher and baker must under no circumstances have any benevolent feelings towards their customers, only that they need not have them in order to consider and fulfil their customers’ wishes, because if they do not do the latter, their businesses will fail. Like all other groups of people, businessmen and capitalists come in all shapes and sizes, but none of them can altogether disregard what other people want, howsoever selfish, and indeed swinish, they may otherwise be.

Adam Smith thought that certain virtues—honesty, prudence, trustworthiness—were of advantage to capitalists. The nastiest, most unscrupulous person is not necessarily the most successful. Indeed, as Montesquieu understood, economic liberalism is incompatible with savagery and actively promotes certain social virtues. Corporatism is quite different.

Some years ago I witnessed a scene in my local fishmonger’s that brought Adam Smith to mind. An old lady, a pensioner, wanted a piece of fish for her dinner. He wrapped it, gave it her, and told her the price. She handed over her purse to him and he, seeing that she had little money, deliberately took far less than the price he had named. “Thank you, madam,” he said on handing back the purse, exactly as if she had been his most valued customer. It was all done with the greatest delicacy, and obviously with a generous heart. His business was a successful one, and its success was a precondition of his being able to act on his generous impulse.

While it is not necessary for private businessmen in their dealings with the public to be motivated by philanthropic sentiment, the same cannot be said of public servants in such dealings. Unless public servants are actuated by benevolence or a sense of duty, they are likely to cause suffering by means of callousness, neglect, obstructiveness or even outright cruelty. It would be the grossest exaggeration, in fact a lie, to say that no people actuated by such benevolence work in public institutions, as it would be a lie to say that all capitalists are swine or that they are all philanthropists. But in my experience, the smaller the public institutions, the larger the proportion of people working in them who are actuated by such benevolence or duty. Giant bureaucracies are not cradles of kindness, which is not to say that such bureaucracies do not exist in the commercial world.

Suffice it to say that the withdrawal of custom is a more powerful weapon than the withholding of a vote, even if the former corrective is a far from perfect one.

Holmes: “If my fellow citizens want to go to Hell I will help them. It’s my job.” And he meant it.

Of Bernie, Bloomie, and Adam

The individual who enters commercial life with Bloomberg-sized ambition takes on a burden few of us would envy.

Tariffs and the Politics of Bizarro World

One knows it’s a strange, new political world in the US when Paul Krugman attacks a Republican President from the right on the subject of tariffs.