Being human, politicians lie. Even in the best regimes. The distinguishing feature of totalitarian regimes however, is that they are built on words that the rulers know to be false, and on somehow constraining the people to speak and act as if the lies were true. Thus the people hold up the regime by partnering in its lies. Thus, when we use language that is “politically correct” – when we speak words acceptable to the regime even if unfaithful to reality – or when we don’t call out politicians who lie to our faces, we take part in degrading America.

The case in point is Television personality Bill O’Reilly who, in his pre-Super Bowl interview with Barack Obama, suffered the President to tell him – and his audience of millions – that the IRS’ targeting of conservative groups had been a minor “bonehead” mistake in the Cincinnati office, because there is “not even a smidgen of corruption” in that agency. O’ Reilly knew but did not say that both he and the President know this to be a lie, that the key official in the affair, Lois Lerner, had made sure that the IRS’s decision on how to treat the Tea Party matter would be made in Washington by writing: that the matter was “very dangerous” and that “Cincy should probably NOT have these cases.”

O’ Reilly did not call out the lie. Nor did he just remain silent. Rather, he said of Obama that: “his heart is in the right place.”

I have written in this space: “Obama’s premeditated, repeated, nationally televised lies… are integral, indeed essential, to his presidency and to the workings of the US government.” They are neither innocent opinions nor mistakes. Rather, they grab for power by daring the listener to call them what they are. Failure to do so, never mind gratuitously granting them bona fides, is redefining our regime.

Nasty, brutish – and false – as was the Progressive assault on George W. Bush: e.g. “Bush lied, people died,” Michael Moore’s “Farenheit 9/11,” etc., was very much part of a free society, in which people freely contest each other’ view of reality. Alas, the Progressive ruling class is instituting a regime in which no one may contest what it knows full well to be false without suffering consequences.

How, for example, is one to react to the White House’s explanation for the Congressional Budget Office’s projection that Obamacare will reduce the number of full-time workers in America by some 2.5 million over the next decade? CBO says the law will do this by “creating an implicit tax on additional earnings” – in other words in-kind bonus for unemployment. But the White House, echoed by the New York Times, says that this is a good thing because it will free people, young and old, to pursue careers or retirement without having to worry about health coverage.

This is the sort of thing that one expects from the North Korean regime, explaining that the latest cut in food rations will free people from the tyranny of having to eat more than once a day, or as I heard on Cuban TV in 1969, that the government had cut the meat ration because its scientists had discovered that eating meat causes cancer. One can no more take such things as sincere expressions of mistaken opinions than anyone, Bill O’Reilly foremost, could legitimately take Obama’s statement that the IRS’ targeting of conservatives was a “bonehead mistake” by low level officials in Cincinnati.

Why then do we not call lies lies, and liars liars? Because there are consequences. Had O’Reilly told Obama something like “You know that this is false. You are insulting me by lying to my face. What makes you think that I, or any other American would stand for that?” he would have been ostracized by the Establishment – and lost his prized access to the White House.

For ordinary Americans, calling the regime’s lies by their name, deviating from political correctness, carries far stiffer penalties, because the regime has labeled each such deviation as an antisocial pathology: racism, sexism, homophobia, islamophobia, “denialism,”etc., any of which mark you as an opponent of those who count. They may fire you, pass you over, or just exclude you from that to which you wish to be included.

This is new and incomplete. But only in America. It is the very routine, the very constitution, of totalitarian society. Returning our attention to the indissoluble link between truth and freedom, lies and servitude, was the great Aleksandr Solzhenitsyn’s enduring contribution to our civilization. 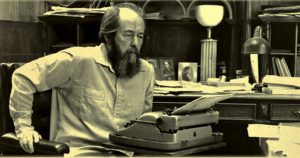 Solzhenitsyn showed that totalitarianism works by leading people to take part in the regime’s lies, and that it does so mostly by a host of petty incentives. Then he wrote: “the simplest and most accessible key to our self-neglected liberation lies right here: Personal non-participation in lies. Though lies conceal everything, though lies embrace everything, but not with any help from me.” The lies that hold up corrupt regimes, he noted, like infections, “can exist only in a living organism.” Hence whoever will live in freedom “will immediately walk out of a meeting, session, lecture, performance or film showing if he hears a speaker tell lies, or purvey ideological nonsense or shameless propaganda.”

We should all do that. Even Bill O’Reilly.