I have been away from this page for several months, working on book that is now nearing completion. Thought I would say hello again and give a preview of the book. You may recall my posts responding to eruptions from Bob Costas, Jason Whitlock and Danny Glover. Those posts tried to retrieve the debate from the swirl of myths, absurdities and glib chatter that often afflict the intersection of race, gun rights and firearms regulation. I have spent a substantial part of my scholarly effort over the years within that intersection. The culmination of that work so far, is my forthcoming book Negroes and the Gun: The Black Tradition of Arms (Prometheus, Jan. 2014). I am still working through copyedits but Amazon already has the pre-order page up. 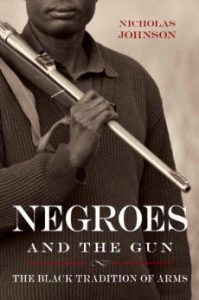 I expect to be talking about the book in a variety of places during 2014. I also plan to work some of the themes from the book into this page as I pick up the blog again. I have posted the Introduction to the book below to give the flavor of it. All I will add for now is that I have known about this story for a very long time, but until I launched fully into the research for the book I did not appreciate its extraordinary richness. Almost every day, as I worked through the sources, I found something that took my breath away. By the end of it there were enough episodes defying the traditional narrative of victimization that it changed the way I think about the black experience in America. More on all this later, for now, here is the Introduction.

From Negroes and the Gun (Prometheus 2014)

This book tells a dramatically different story. It chronicles a tradition of church folk, merchants and strivers, the very best people in the community, armed and committed to the principle of individual self-defense. This black tradition of arms takes root early and ranges fully into the modern era. It is demonstrated in Fredrick Douglass’ advice of a good revolver as the best response to slave catchers. It is evident in mature form in 1963, when Hartman Turnbow of Mississippi fought off a Klan attack with rifle fire. Turnbow considered this fully consistent with the principles of the freedom movement, explaining, “I wasn’t being non-nonviolent, I was just protectin’ my family”.

The black tradition of arms has been submerged because it seems hard to reconcile with the dominant narrative of nonviolence in modern civil rights movement. But that superficial tension is resolved by the longstanding distinction that was vividly evoked by movement stalwart Fannie Lou Hamer. Hamer’s advice about segregationists who dominated Mississippi politics was, “Baby you just got to love ‘em. Hating just makes you sick and weak.” But asked how she survived the threats from midnight terrorists Hamer responded, “I’ll tell you why. I keep a shotgun in every corner of my bedroom and the first cracker even look like he wants to throw some dynamite on my porch won’t write his mama again.”

Like Hartman Turnbow, Fannie Lou Hamer embraced private self- defense and political nonviolence without any sense of contradiction. In this she channeled a more than century old practice and philosophy that evolved through every generation, sharpened by icons like Ida B. Wells and W.E.B. Dubois, pressed by the burgeoning NAACP, and crystallized by Martin Luther King who articulated it this way:

Violence exercised merely in self-defense, all societies, from the most primitive to the most cultured and civilized, accept as moral and legal. The principle of self-defense, even involving weapons and bloodshed, has never been condemned, even by Gandhi. … When the Negro uses force in self-defense, he does not forfeit support he may even win it, by the courage and self-respect it reflects.

…But violence as a tool of advancement, involving organization as in warfare… poses incalculable perils.

In practice and policy, from the leadership to the grass roots, this view dominated into the 1960’s – right up to the point where the movement boiled over into violent protests and black radicals openly defied the traditional boundary against political violence. That violent and radical turn was the catalyst for a dramatic transition, as the movement ushered in a new black political class. Rising within a progressive political coalition that included the newly minted national gun control movement, the burgeoning black political class embraced gun bans and supply controls to answer the violent crime in their new domains. By the mid-1970’s, these influences had supplanted the generations old black tradition of arms with a modern orthodoxy of stringent gun control.

The first seven chapters of this book chronicle the rise, evolution and decline of the black tradition of arms. Chapter eight details the pivot from that tradition into the modern orthodoxy.

The secondary theme of this book, distilled in the last chapter, addresses an intriguing tension. On one side is the tragic plague of violent young black men with guns and the toll that this violence takes on many black communities. On the other is the fact that recent momentous affirmations of the constitutional right to keep and bear arms were led by black plaintiffs, Shelly Parker and Otis McDonald, who complained that stringent gun laws in Washington D.C. and Chicago left them disarmed against the criminals who plagued their neighborhoods. The modern orthodoxy would cast Parker and McDonald as dupes or fools. But the black tradition of arms places them in a more complex light and raises critical unexamined questions about the modern orthodoxy. Chapter nine engages those questions, highlights the diversity of interests and views about the gun question, and assesses the current implications of the black tradition of arms.

In the several years that I have been working on this project, people have asked what motivated it. What did I hope to achieve? To the first question, this book, like much of my work, is motivated by a rural sensibility, a familiarity with and affection for people and places that are under-acknowledged in both in popular culture and in policy-making.

To the second question, my goal here is to answer a longing that I have observed in a variety of contexts. It is evident when people, especially young people of color, probing the narrative of the civil rights movement, wonder plaintively “whether anyone ever fought back”. There is a palpable yearning for something more than the images of negroes in church cloths flattened by baton charges, attacked by dogs and sometimes hanged from tree limbs. Many of these people were heroes. But they were also victims and that leaves us unfulfilled, grateful for their sacrifice, but still not fully proud. The question lingers, where is our Leonidas? Where is our classic champion who meets force with force even in the face of long odds? Some may find an answer within the black tradition of arms.

Of course, many episodes here end badly for Negroes with guns. And any worry about over-glorifying violence is further leavened by accounts of prosaic black on black violence and desperate, failed efforts that are more pathetic than heroic. But other episodes, like Hartman Turnbow’s defiant stand, leave us wondering how different is that really, from the tale of gallant young cavalrymen charging artillery placements with sabers?

Black folk still await their Tennyson. But his raw material is in these pages.

Not a Second-Class Right

New York State Rifle & Pistol Association v. Bruen rules that the Second Amendment is just as important as our other rights.