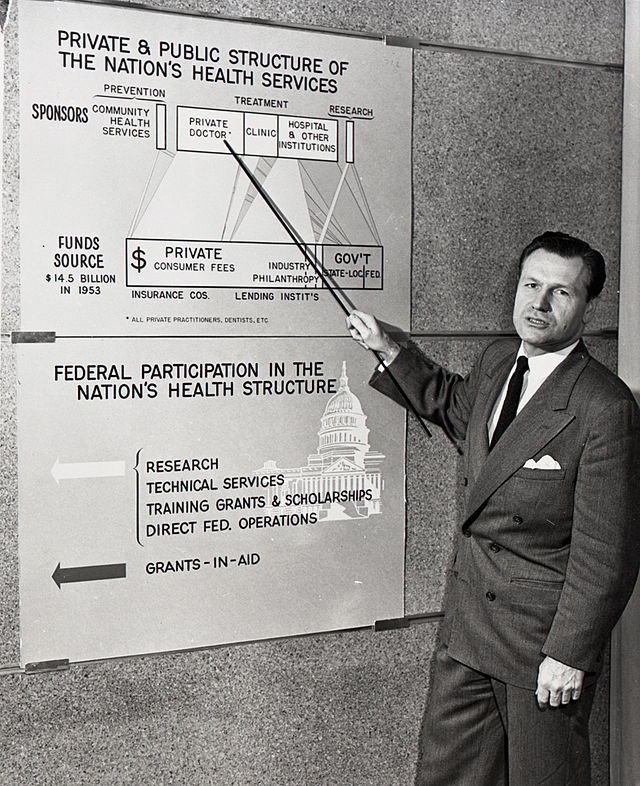 This is the saddest story of a billionaire ever told. The grandson of the richest man in American history, Nelson Rockefeller spent his life overcompensating for another kind of inheritance—dyslexia. As a result, he became a politician of grandiose ambitions, a bully to his brothers, and a relentless womanizer.

Richard Norton Smith tells this tale well in his riveting, if sometimes overstuffed, biography, On His Own Terms.  A great  strength is to show how at the beginning Rockefeller’s hubris seemed well matched to the temper of the times.  For the Democrats, Lyndon Johnson offered a  vision of the great society for the nation. For the Republicans, Rocky offered an almost indistinguishable program at the state level.

In his fifteen years as governor of New York, he vastly expanded the scope of the state government. He created new programs in education, transportation and more general schemes of redistribution. He raised taxes until they were among the highest in the nation and, with the help of John Mitchell, who would go to become Richard Nixon’s Attorney General and a Watergate felon, created “moral obligations bonds” that permitted the state to evade restrictions on borrowing.

The results haunt New York State to this day. Its high-spending, high-taxing government may be compatible with the high value economy of New York City but has devastated upstate New York. Who would pay 8 percent of income to live in Troy or Buffalo? Fittingly, one of Rockefeller’s many boondoggles—his huge mall of slab-like edifices for state government in Albany– will long survive as a testament to the folly of his schemes— a warning about the abuse of power no less telling than the monument of Ozymandias. Built to symbolize the “vitality” of New York State, the mall is now deserted outside of business hours and sits in a city that continues to shed private sector jobs and people.

Rockefeller also reflected the enthusiasm for government by experts. He himself had no enduring political philosophy. Despite having attended Dartmouth, he did not have a high opinion of his own intellectual abilities, in part because of his dyslexia. He prided himself on being a man of action, not of learning. Upon reading a memo in which one of his advisers mentioned Aquinas, Governor Rockefeller suggested that a meeting be set up with that perspicacious philosopher!  When Rockefeller’s experts suggested treatment as a solution to the growing problems of drug addiction, he had the state spend money on treatment. When that did not appear to work, and other experts suggested substantial incarceration for even minor drug offenses, Rockefeller supported draconian laws that are now associated with his name.

Richard Norton Smith shows that Rockefeller never had a realistic chance of becoming the Republican nominee for President. Rockefeller’s divorce and remarriage to an erstwhile friend’s wife in the early 1960s proved an obstacle. A greater problem was his inability to realize that he did not need simply to appeal to party bosses, but to the grassroots. Perhaps the greatest problem of all was the growing recognition that ever bigger government was a cause, not a cure for most social problems. Barry Goldwater and Ronald Reagan did not kill off Rockefeller Republicanism. It sank under the weight of the excess government it created.

The Bill of Rights

Is This Progressivism’s Last Gasp?