Even before FLOTUS’s announcing Argo as the best picture, it was not a good night at the Oscars, and not just for conservatives. Neither Lincoln nor Zero Dark Thirty won all the accolades they deserved. But for them to be bested by a film which ends with Jimmy Carter as the hero is a humiliation for the Academy and the country, yet again.

I once attended an annual meeting of the American Political Science Association in Atlanta in the 1980s, at which Jimmy Carter was wildly applauded. And there are more conservatives in Hollywood than among political scientists. At least Hollywood split their tickets between Carter and Lincoln, while denying top prize to the Marxist musical. (I have already reviewed Lincoln for this site.)

Zero Dark Thirty and certainly its director, Kathryn Bigelow, deserved better, but politics got in the way. Their competition was not only singing communists but George Bush and Dick Cheney’s Iraq policies and bipartisan opposition to the alleged praise of torture in the film. Others wrongly feared the movie would be an Obama testimonial.  According to a Washington Post front-page analysis on Academy Awards morning, “[N]o other film has been mangled by the Washington spin machine as much as ‘Zero Dark Thirty.’”  In this view, part of the hit on ZDT is evidenced by this absurdity: “The Venn diagram of Hollywood and Washington achieved perfect consonance on Jan. 13, when former president and surrogate extraordinaire Bill Clinton introduced “Lincoln” at the Golden Globes ceremony.” It is not a good sign that “On Saturday, newly minted Secretary of State John Kerry even tweeted good luck to ‘Argo’ on Oscar night.”

But Zero Dark Thirty is no war propaganda movie. Bigelow’s two great war movies actually concern themselves with individual morality within a bureaucracy. Her 2010 Best Picture and Best Director-winner, The Hurt Locker, portrays the tensions within and around a U.S. Army bomb disposal team in Iraq. That movie and the hunt to get bin Laden have in common a paean to those who fulfill their duty, in the face of personal and professional danger. Those who don’t see the real dangers are destroyed either by their enemies’ bombs or their colleagues’ personnel reports. And the blindest are those in one’s own bureaucracy, whether in the field in Iraq or in the CIA.

The Hurt Locker’s Sgt. William James, the bomb-disposal unit leader, defies rules and common sense, risks his team’s safety, and displays extraordinary courage that goes beyond recklessness. Yet, at home, the man who knows which bomb wires to cut, in which order, is stymied by a supermarket wall full of offerings, when his wife asks him to pick up a box of cereal for their son. James is no better suited for peace than is Coriolanus. He is a contrast with his namesake pragmatic psychologist, behaving like an Achilles and certainly rejecting any “moral equivalent of war.” In this we are reminded of the dark end of Stephen Spielberg’s anti-terrorist drama Munich. 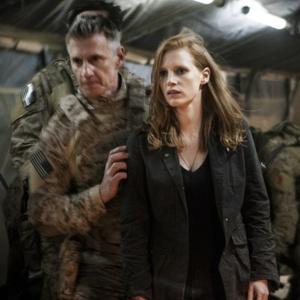 Whether Zero Dark Thirty’s Maya can find peace is also problematic. Best Actress Nominee Jessica Chastain showed steel beneath delicacy in Ralph Fiennes’s Coriolanus, where she played Mrs. Coriolanus—Virgilia, not Volumnia. Those qualities recur in her CIA analyst Maya, a dauntless Inspector Javert for bin Laden. Like Javert she rises through the bureaucracy but always keeps her eye on her goal. Maya succeeds in catching the old planner of 9/11 through clever detective work and the intelligent use of high-tech spying—not the sort of profiling and abstract analysis that have so often failed the CIA over the years. (How information received from torture assisted in the bin Laden killing was made clear in this panel with former CIA officials (link no longer available).)  Her struggle is more with her skeptical colleagues than with deadly assailants. Whether in the field or at Langley Headquarters, she meets with opposition. But once she persuades the higher-ups, and others, taking confidence in her, cooperate, she triumphs.

In her campaign, Maya encounters none other than Tony Soprano, the Mafia boss. James Gandolfini plays CIA Director Leon Panetta. The best-known actor in the film was downplayed in the preliminary billing, in order for him to make his appearance all the more striking. In showing how this head of the bureaucracy doesn’t know his people, when he approaches her at lunch to ask her about her bin Laden hunt, Soprano-Panetta casually asks Mara how the cafeteria food is. He doesn’t know his bureaucracy. (High-ranking officials in Washington occasionally take meals in the agency cafeteria to show that they are all part of one team.)

Is the choice of Tony Soprano here intended to put the torture controversy into perspective? Is what was formerly called “the global war against terror” actually a showdown between a Mafia-like murderous bureaucracy and a mysterious, tribal conspiracy of religious fanatics?

There is moreover a bin Laden backstory to be kept in mind. Obama created a brief stir during his 2008 campaign when he declared he would intervene militarily in a country (meaning Pakistan) without its consent in order to combat terrorism. This certainly anticipates both his bin Laden mission as well as his drone policy. Before he became president, Obama may well have reverse-engineered what would be his greatest foreign policy triumph and an important element in his re-election, in order to ascertain what he would have to do to get bin Laden. (I have always believed Obama to be one of our most transparent politicians—he wrote two autobiographies telling people how he thinks about policies and people.) In that regard, might one consider that perhaps Obama positively enjoys killing people with drones, as much as he enjoys downing clay pigeons with his shotgun.

The real questions concerning torture here are these: Do Americans still hate the perpetrators of 9/11 enough to kill our enemies? Do we still remember 9/11? The movie seems to have its doubts, since it begins by replaying footage from 9/11 and other terrorist episodes. But the world outside of Hollywood is not ready for the moral equivalent of war (as the President himself acknowledged in his Nobel Peace Prize speech).

As egregious was Mrs. Obama’s appearance at the Oscars, at least it was not combined with a Best Movie award to Les Miserables. Victor Hugo was an avowed enemy of the Catholic Church, who nonetheless spent over 100 pages at the beginning of his novel developing the character of the priest who would convert Jean Valjean. While acknowledging the beauty of spiritual conversion, the movie makes conversion to revolution far more attractive, however. Will a future Paris (or Moscow) Commune succeed Javert with an evil bureaucracy of its own? At the movie’s end we half-expect to see Obama appearing in a cameo role, as the rebels now all alive once again, resurrected as it were, appear together on the barricades.

The Bank of the United States and Mr. Hamilton’s Surprise!

Shakespeare’s Women and the Rule of Law